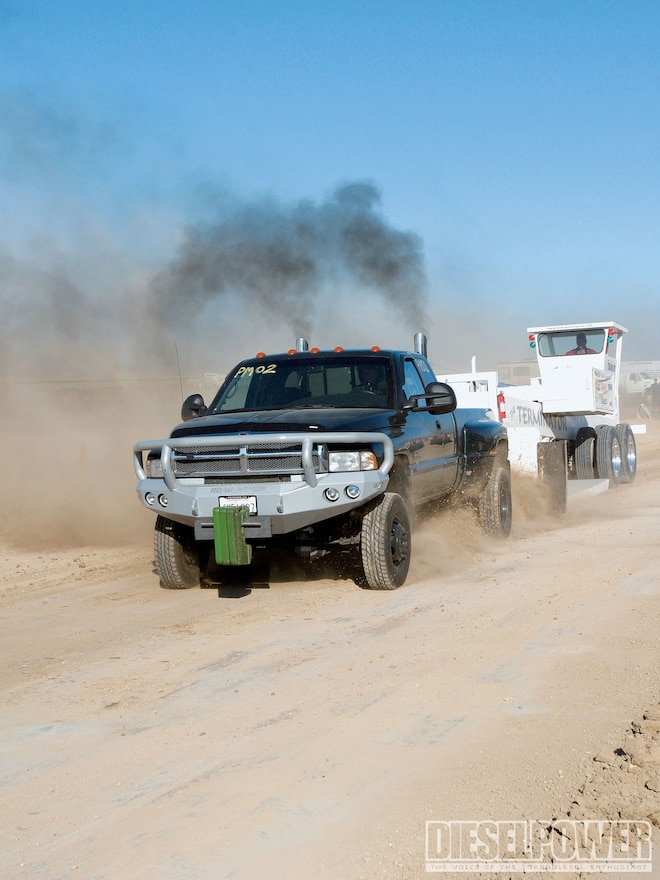 In the sport of sled pulling, raw horsepower and torque are often seen as the best way to claw up to the coveted number one position. Joel Gooch, co-owner of J&H Performance in Redding, California, sees things a bit differently. While his '01 Dodge 3500 makes good power (about 650 to 700 hp at the wheels), it often finishes ahead of pullers that have hundreds of horsepower more than his green monster. How? Joel has spent a lot of time ensuring that his truck builds plenty of ground speed during the pull. While horsepower might help at the very end of the track, a smooth start and plenty of momentum are perhaps the most overlooked elements of a good run.
View Photo Gallery | 11 Photos
Photo 2/11   |   diesel Power 2001 Dodge 3500 sled Pull
A Wide Powerband
Joel pulls in a Street Class, which allows a single unlimited turbocharger, or a set of compounded turbos where the larger turbo is a maximum of 3.2 inches in diameter. Believe it or not, Joel has traded some airflow for spooling ability, and his 58mm inducer S300 and 74mm inducer S400 combo is much smaller than you might expect from a truck at this level. Still, the smallish turbos allow the truck to leave the line softly, make plenty of power downtrack, and still pull hard on the top end where a big single will start to surge. However, the turbo setup is only part of the engine equation. The 24-valve Dodge has been upgraded with a 13mm plunger P7100 injection pump fed by a 240-gph FASS fuel system and competition injectors from Dynomite Diesel. The mechanical pump and 24-valve head combine with the turbos to provide a very wide and usable powerband, while a set of head studs and a fire-ring kit from Haisley Machine make sure the engine stays together.
Durability is Key
"The injection pump has a set of 6,000-rpm governor springs, but I only shift at 4,000 rpm," Joel said. "If anything in the driveline ever breaks, the engine will zing and I'll be in some serious trouble-so I just tried to build the driveline so it never breaks." In this case, a bulletproof driveline started with the transmission. A Sun Coast flexplate was used along with a Spec-Rite torque converter to get the power back to a built 47RE. The transmission was assembled by Joel and features billet input, output, and intermediate shafts, and a billet Third gear drum. The trans then dumps the power to an NV271 transfer case with a bolt-on rear flange from Transfer Case Express. The driveshafts are made out of extra-thick 0.125-inch tubing and are 4 inches in diameter. The front and rear axles are surprisingly stock, as factory 3.54 gears combine with ARB Air Lockers fore and aft to provide power to the wheels.
Suspension and Tuning
With a quick-spooling and high-revving engine connected to a strong drivetrain, getting that power to the ground is the last piece of the puzzle. Like everything else on the truck, Joel put a bunch of thought and engineering into the suspension on his '01 Dodge. A 2-inch leveling kit with longer trailing arms (to keep the driveshaft geometry correct) clears six 235/85R16 mud and snow tires that are good on California's hard-packed tracks. A set of adjustable Fox racing shocks smoothes out any bumps, and custom-built traction bars by J&H Performance ensure the green Dodge gets plenty of bite.
Is it Streetable?
Joel is honest about his truck being used mostly for sled pulling but is also quick to point out that it is still very streetable. "I can jump in and start it right up," he said. "It doesn't smoke much at part-throttle with the Dynomite injectors, and it spools quick on the street. In fact, the throttle uses a 12-valve throttle position sensor (TPS) wired into an old Banks box, so the truck doesn't even know it has a P-pump on it. The cruise control, gauges... everything still works." So why is the truck just used for sled pulling? "With a truck like this, the more you drive it and beat on it, the more likely you are to break it," Joel explained. With more than two years worth of pulling, minimal maintenance, and multiple First Place trophies, it's hard to argue with results.