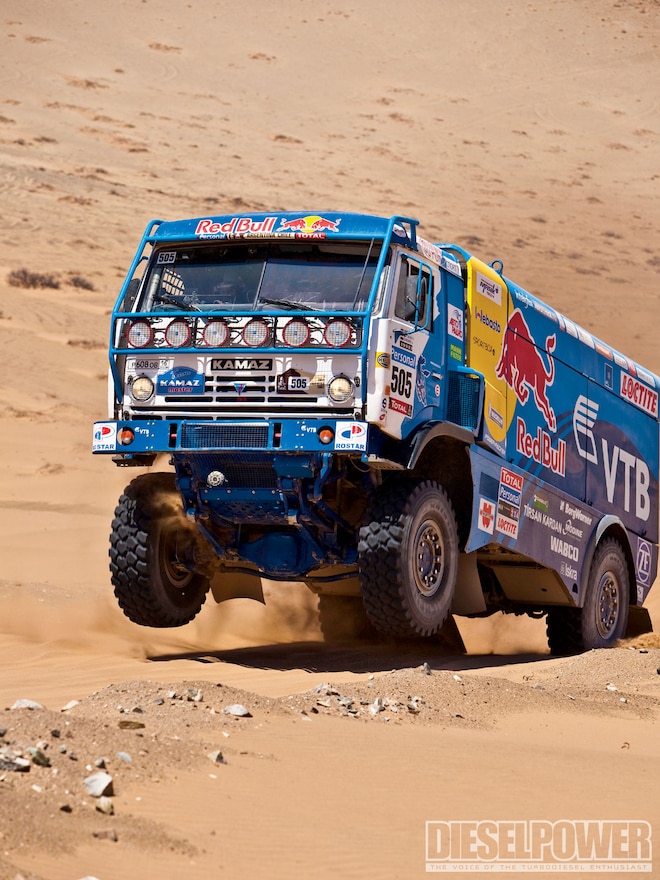 The Dakar Rally is one of the most grueling off-road races in the world and covers thousands of miles of harsh terrain. Under such demanding conditions, race teams need scores of spare parts to ensure their vehicles finish successfully. In order to carry such components, each team has support vehicles laden with everything from shock absorbers to spare engines to address any issue that might arise. And just like on our own interstates, hauling these huge loads is the exclusive domain of diesel trucks. But the diesel trucks of the Dakar Rally don't have the luxury of traveling down the paved interstate. Instead, they venture across the same rugged track as the vehicles they are supporting so that any issue can be addressed quickly and efficiently. These vehicles even have their own race class in the Dakar Rally, dubbed T5.
View Photo Gallery | 15 Photos
Photo 2/15   |   The T4 Dakar race trucks are a crowd favorite, and the Kamaz are the most popular of the bunch. It was not uncommon to see a helicopter flying above these trucks to film them for television coverage of the Dakar Rally.
It did not take long, though, before the drivers of these four-, six-, and eight-wheel-drive T5 trucks were waging a race of their own-only against each other. As a result, the T4 class emerged. The T4 class is made up of vehicles that look similar to the T5 support trucks, but the T4s are actual race vehicles instead of being parts carriers for other teams. While the Germans (Volkswagen and BMW) and the Japanese (Mitsubishi) battle in the car class for the overall win, the T4 class has become the exclusive domain of the Russian-built Kamaz trucks. Kamaz (www.kamaz.net/en) has won the T4 class in 8 of the last 10 years, fending off threats from MAN, Tatra, and Ginaf in the process.
Heading this charge is the Kamaz Master Team (www.kamazmaster.ru) driver Vladimir "The Czar" Chagin, this year's T4 class winner and record holder for the most stage wins in Dakar history. In 2010, Chagin finished more than an hour ahead of his teammate Firdaus Kabirov and an astounding 10 hours ahead of the Third Place finisher (in a Ginaf truck). What's more, Chagin finished 13th overall, besting the vast majority of the 140 smaller, lighter, and more maneuverable race vehicles entered in the rally. You owe it to yourself to search "Kamaz Dakar" on YouTube right now.
View Photo Gallery | 15 Photos
Photo 3/15   |   Air time is not uncommon for the huge T4 Kamaz trucks. Their weight requires momentum to be maintained in order to be competitive-not unlike a sled pulling truck.
This feat is truly mind-boggling when you consider that the race-winning Kamaz trucks use leaf springs and solid axles front and rear and weigh in at a whopping 20,000 pounds. The front spring packs consist of 15 leaves, while the rear uses a 10-leaf pack. The leaf springs are combined with Reider Racing shocks (from Holland) at each corner.
The Kamaz race trucks use a production cab that is situated at the front of the truck and holds the driver, co-driver, and mechanic. The cab is fitted with an FIA-approved cage, race seats, and harnesses. Inside the cab, Kamaz team drivers Chagin, Kabirov, and Ilgizar Mardeev are busy shifting the 16-speed ZF transmissions of their race trucks to keep the 730hp, V-8 diesel engine in its powerband, while navigators Semion Yakubouv, Belyaev Aydar, and Girya Serguei provide directions on the course and monitor the in-cab adjustable tire inflation system. Mechanics Serguei Savostine, Dzhamil Kamalov, and Eduard Kupriyanov's role is to monitor gauges and spearhead any necessary repairs on the course.
Behind the cab, the metal bodywork of the truck is merely for appearance, as weight saving is key. Two huge fuel cells hold a combined 237 gallons and sit low in the center of the chassis to feed the 17.2L engine. At the rear of the truck, two huge 50-inch-tall Michelin XZL tires and 20-inch three-piece beadlock wheels are used as spares and provide ballast to offset the cab. The V-8 engine sits low in the chassis (and behind the front axle) to further aid the race truck's desirable weight distribution. The transfer case is pushed rearward in the chassis, which provides better driveline angles and transfers some of the weight to the rear of the vehicle.
While the trucks are more advanced than some of the competition, that does not account for all of Kamaz's success. The combination of experience and desire from Chagin and the rest of the team's drivers help push the Kamaz trucks to the front of the pack. What is so astounding is that they are able to push the trucks so hard day after day for thousands of miles without catastrophic failure. With the German MAN trucks, Dutch Ginaf, and Czech Tatra trucks all licking their wounds, it would appear as though no one can challenge the Russians in the Dakar. We would love to see a diesel version of the Cold War start up with Peterbilt, Oshkosh, or International tossing their hat into the ring (perhaps with Pikes Peak driver Mike Ryan behind the wheel?). American truck manufacturers, are you listening?