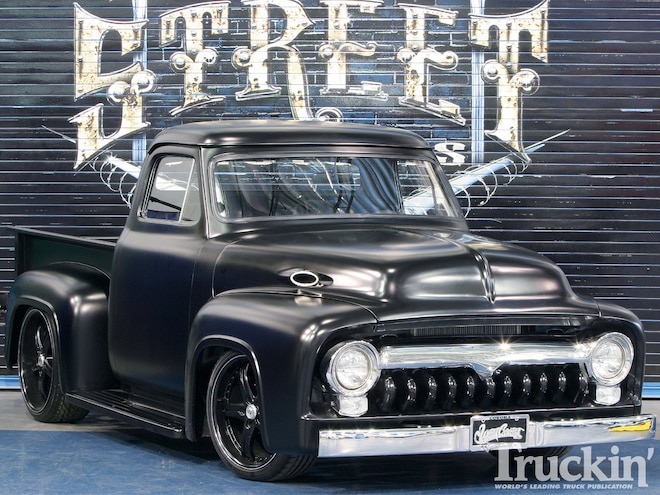 With almost every action star who has ever mattered starring in the Hollywood blockbuster, The Expendables, you'd think that it'd be near impossible to squeeze just one more shining subject under the spotlight. The all-star cast is a conglomerate of legitimate badasses that have blown up the big screen on their own, but, Sylvester Stallone, actor/director of the film, assembled the "Toughest Crew of the Century" for one of the most explosive cinematic experiences to date.
Sly did, however, manage to make room for another pivotal figure in his action equation, in the form of this flat black, low and lethal '55 Ford F-100. West Coast Customs, known purveyors of the most sinister of custom street rides, was given full responsibility to create a hardcore, rolling soldier that was tough enough to hang with the rest of the cast. The automotive co-star of the film's band of mercenaries' trade has been given a credible street treatment as it has been dropped with Heidts performance suspension products, and trucks hard on General Tire-equipped 20/22-inch Asanti five-spokes. Imagine being chased down and sprayed with bullets by a truck looking as menacing as this one. Now try to imagine a ripped, take-no-bull, wall of a man as big as Mr. Stallone behind the wheel and wielding the gun. Luckily, most of us will only see that kind of action in theaters.
To keep the '55 on the tails of its targets, an ATK-supplied high-performance 302ci small-block has been stroked to a beastly 347ci powerplant and is topped by several Edelbrock go-fast goodies. A B&M transmission helps the Ford cut its way through traffic like a blood-thirsty savage. The West Coast crew forged on by incorporating a Gibson exhaust system, Sanderson headers, MSD Ignition products, and a March Performance pulley setup to beef up the F-100's brawn. This truck, after all, was built to showcase a degree of balls-to-the-wall prowess meant to strike fear and fright into the hearts of its prey.
Inside the cockpit of this mobile corpse creator are two secret compartments, one underneath the center of the dash, which houses a 1911 .45 prop pistol, and one at the rear of the center console that conceals what we've identified as an MP9 submachine gun prop. You definitely wouldn't want to catch Sly and his killer ride on a bad day. AutoLoc gauges, Cerullo seats, a Flaming River steering wheel, a Gennie 'Commander' shifter, 'Orbit' knob, and carpet and headliner material from LMC Truck round out the rest of the non-threatening amenities found inside the Ford's cabin. The dash has also been smoothed and painted to match the same matte color as the exterior, for an all-around, under-the-radar appearance.
When team WCC found themselves on the threshold of the bodywork stage, they quickly realized that working with brand-new panels would be ideal. Luckily LMC Truck carries fresh metal panels, so the project wouldn't be slowed down while attempting to resurrect the 55-year-old skin. While the crew was at it, they had LMC Truck kick down fresh bumpers, taillights, door handles, roll pan, and a grille shell, which was stuffed with custom-fit Merc teeth. To take the hot-rod style a few steps further, the roof was chopped three inches, and hood vents were grafted into position. Since the Ford was conceived to be an unseen street predator, the only color option for the LMC sheetmetal that would properly suit the occasion was PPG Envirobase flat black coupled with matte clear.
What sounds like an exciting movie prop build was actually a hectic situation for WCC, as they had to build two more identical trucks that looked and performed exactly like the one we photographed while on location at their Corona, California, compound. As anyone can imagine, any type of fast-paced, Hollywood production would be hell on the nerves, but the West Coast boys were only given three weeks to build three completely crazy trucks for the movie: one that was going to be driven by Sly himself, and two stunt trucks that were purposely built to take an unholy beating on film. Without the help on LMC Trucks, Heidts, Edlebrock, B&M Transmissions, and three dedicated Wyotech interns, Rusty McClintock, Owen Lubenow, and Matt Myers, the entire project wouldn't have come to its complete evolution in time for the first take.
How They Built It