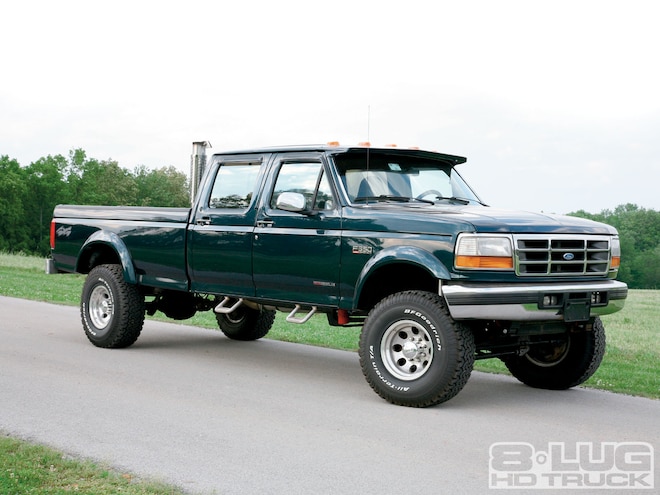 "I found this truck on eBay," John Crandall of Crystal River, Florida, told us. "It was being sold about six hours away from where I live. I loved the configuration and color of the truck-I've long been a fan of the older body style, because to me it represents the ruggedness and utility a truck should have."
View Photo Gallery | 14 Photos
Photo 2/14   |   John Crandall of Crystal River, Florida, drives this '96 Ford F-350 every day.
After driving six hours to pick the truck up, John found it had been used...a lot. It was scratched and dented in every conceivable place and the underside was coated in orange clay dust. Apparently, a logger had owned the truck and used it exactly how you would expect a logger to use it. John limped his new ride home, discovering on the way that the transmission was shot. He took the truck straight to a body shop.
While the Ford was being worked on, John replaced the factory diff covers with Mag-Hytec units and installed Auto Meter Phantom II gauges. After adding a few of Dieselsite.com's products (John works there) he addressed the axles, which were just about worn out. With the axles completed, he was brave enough to start adding performance parts. The final step was to completely graft in the Lariat interior from a '99 Ford Super Duty. This was no easy task, but the results speak loudly. An '08 console was installed, too.
The F-350 has an MBRP downpipe, muffler, and stack piping kit, which leads into a pair of Silverline 5-inch straight-cut exhaust stacks. A Dieselsite Adrenaline HPOP injection pump keeps the fuel flowing to the 7.3L Power Stroke diesel engine. Well, the Dieselsite OBS CPR fuel system has a lot to do with that, too. The Swamp's Diesel Performance 170cc/30-percent nozzle injectors never go dry.
A TS Performance six-position chip with Total Diesel Performance tuning (Tony Wildman) instructs the engine what to do. The truck also received live tuning from Bill Cohron at Power Hungry Performance. With this much serious power, a stout transmission is a necessity. So John went with the Factory Tech Monster Box 4R100 automatic transmission. John uses Amsoil fluids in his engine, transmission, and differentials and Evans Cooling waterless coolant in the radiator. The coolant is filtered with a DieselSite kit, as is the transmission oil. John walked behind the counter at DieselSite for a Max A/C assist and Cold Rush upgrade, too.
There was no way a truck like this could sit at the factory ride height, so John installed a Sky Off Road 3-inch lift kit complete with Bilstein shocks. A reverse shackle kit from Sky Off Road took care of the rear end. American Eagle wheels were paired with BFGoodrich A/T tires (315/75-16) for a nice look.
We love the way John took an older truck and turned it into a real looker and serious performer-and he still drives it every day.