How It's Made: Cummins 6.7L Engine

We tour Cummins' Midrange Engine Plant to see history being made 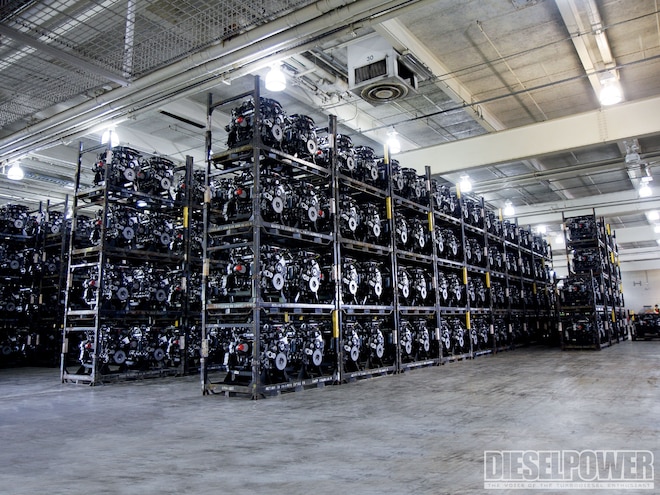 No other diesel manufacturer has perfected its engine the way Cummins has, be it for industrial power generation, off-highway mining vehicles, on-highway Class 8 trucks, or our favorite-pickup trucks. After all, the Cummins inline-six that's responsible for powering the Dodge Ram is the most celebrated diesel engine in our industry. Not only because of the B-series' performance potential, but also for its promise of long-term durability.
View Photo Gallery | 29 Photos
Photo 2/29   |   1011dp How Its Made Cummins 6 7l Engine built Engine Storage
Cummins has built more than 1.7 million 5.9L and 6.7L engines since 1989. Beginning in 1992, production of the 5.9L shifted to Cummins' Midrange Engine Plant (CMEP) in Columbus, Indiana, and this is where the 6.7L engines currently go together. The CMEP is a state-of-the-art, environmentally friendly plant that builds engines exclusively for Ram trucks. To get an idea of how the benchmark of all diesel truck engines is built, we stopped by the plant and watched the complete 6.7L engine assembly process unfold.
On Time, Every Time
Run in an almost military-like fashion, CMEP operates on a tight schedule-with quality control being key. During assembly, an engine will not move to the next assembling station unless it has satisfied a list of specific, built-in, fail-safe parameters. Cummins abides by a first-in, first-out inventory method for complete engines-so parts don't sit around. Cold-test stations ensure every engine meets precise specification guidelines before ever being fired on fuel. Random engine dyno testing confirms the assembly process is consistently efficient, and that the engines satisfy every testing parameter before leaving the facility. As we watched a bare block become a complete 6.7L diesel, there was no doubt in our minds why every Cummins engine leaves here a robust, million-mile contender.