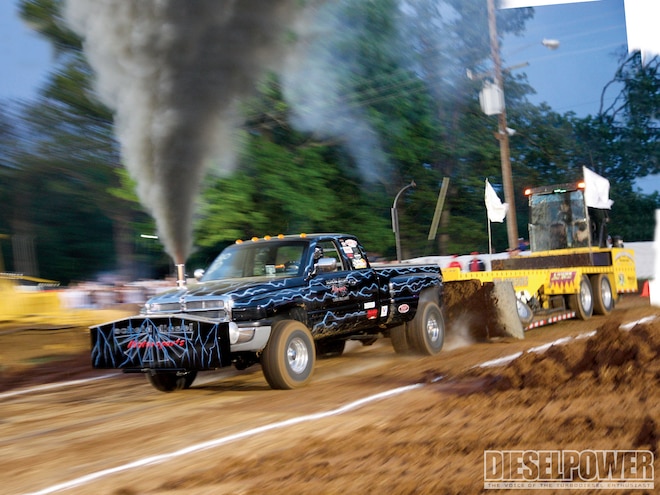 Thirty-nine hooks in 3 months-that was the number of dates scheduled for the Pro Stock pulling trucks within the Illinois Tractor Pulling Association's list of events for 2010. For the Scheid Diesel Motorsports team, that meant 39 attempts at winning the 3.0 Class point's chase, 39 venues to lend a hand to its customers, and nearly 39 opportunities to represent the Scheid name in front of the masses. This year, Brad Ingram, the head of Scheid Diesel's sled pulling department, took on the task of not only competing at these events but also providing on-site customer support for all of Scheid's customers. A tall order for sure, but one that came naturally for Brad.
View Photo Gallery | 20 Photos
Photo 2/20   |   1011dp 2 Days 3 Pulls 600 Miles scheid Truck With Sled
You see, when you're behind some of the country's most successful pulling trucks (including your own), it makes spending your summer nights running all over the Illinois countryside worth it. Simply put: When summer starts, the Scheid team kicks it into Overdrive, and the wild ride doesn't end until fall. We hooked up with Brad last July-a month when the 3.0 trucks had 21 hooks-to see what life is like on the road with a competitive, shop-sponsored pulling team. In just two days, we logged more than 650 miles and attended three events in two states. The fun began on a Friday night in west central Illinois, moved east 150 miles the next day, and concluded later that night in central Missouri.
Right from the get-go we realized we weren't merely witnessing a business-promoting endeavor for diesel motorsports, but a full-on, family effort as well. Brad's wife, Susan, and their two sons make up the Scheid pulling team's crew-each doing his or her share to keep the truck in tip-top shape and running strong all summer long. Follow along as we outline our busy weekend with the Ingrams and show you why Scheid is one of the most powerful names in diesel.