How It's Made: The Duramax Diesel Engine

We Take You Inside The DMAX Assembly Plant To See The 6.6L Machined, Assembled, and Dyno-Tested 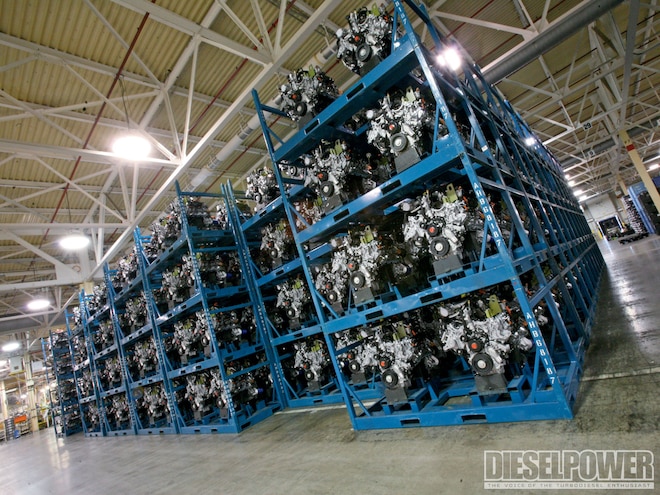 Ten years ago, nobody knew what a 6.6L Duramax engine was. We couldn't tell how they worked, how long they would last, or the power output they'd be capable of making. Ten years, and more than 1.3 million engines later-we know the answers to all those questions.
View Photo Gallery | 29 Photos
Photo 2/29   |   1012dp How Its Made Duramax Diesel assmbled Engines
As a Diesel Power reader, you've seen hundreds of stories in our pages discussing the Duramax. We've tested it, talked about its design, and showed you how to modify it. The one piece of the story you've been missing, however, has been how these engines are built.
Where The Magic Happens Duramax engines are manufactured in Moraine, Ohio, by DMAX Ltd. This is a joint venture between General Motors and Isuzu. When originally conceived, DMAX Ltd. was 60 percent owned by Isuzu and 40 percent owned by GM. Today, that ratio has swapped, and GM is the majority owner.
There are a number of things that make the DMAX facility different from other GM engine plants. The most significant is that it hot-tests 100 percent of the engines it produces. That means every 6.6L engine is run on a dyno before it ever goes in a truck. No other GM engine mass produced in North America gets that treatment-nor do the 6.7L Cummins or 6.7L Power Stroke engines.
In The Plant We spent an entire day in the DMAX plant with our cameras and got to ask all the questions you'd ever want answers to. The facility is huge and well laid out. The raw materials enter the west end of the building and progress easterly as the blocks, heads, rods, and cranks are machined. The facility is well lit, safety oriented, and filled with workers who care about what they're building. The only two things we weren't allowed to photograph were the machines used to adjust each engine's valvetrain, and the dyno cells.
Watching the system that sets the Duramax valve lash is like watching a Terminator robot perform open heart surgery on another Terminator. Each engine's rotating assembly is spun multiple times, and a series of what look to be laser-range finders and electronically driven sockets adjust the valve lash.
The dyno cell is even more impressive. Each engine is placed on a stand that slides into its own dyno room. The engines are fed preheated oil and coolant to bring them up to operating temperature. The dyno spins the engine over to start it-there's no need to use the starter motor. Each engine is run on diesel to ensure its full-rated power output. We don't know if we'll ever be able to stop smiling after witnessing dozens of Duramax engines making dyno pulls!
DMAX LTD: By The Numbers Location: Moraine, Ohio Plant size: 584,000 square feet Employees: 415 hourly, 117 salaried Union: IUE-CWA Local 755 Year facility opened: 1999 Beginning of production: July 17, 2000 Production capacity: 200,000 engines a year Number of engines built on day of our visit: 320 Total number of Duramax engines built: More than 1.3 million
Thank You, DMAX! Our special thanks go out to Tom Read of GM Powertrain, and Maho Mitsuya, Steve James, and Courtney Strickler of DMAX Ltd. for making our visit possible. We also want to thank the men and women of the IUE-CWA Local 755 union for letting us come into their workplace and allowing us to share their success story with our readers. Keep up the great work!