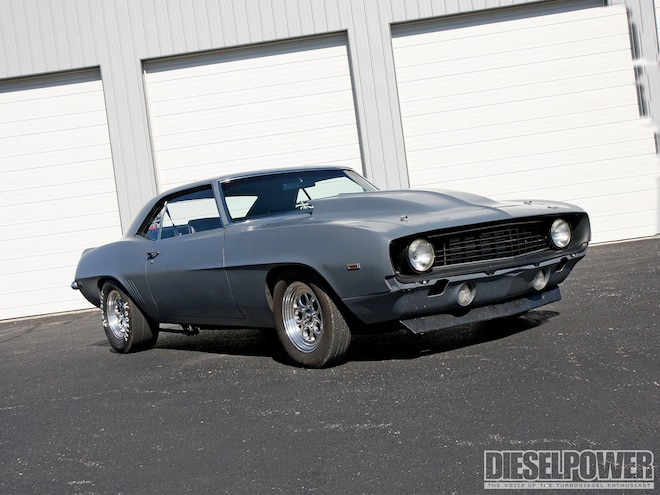 First-generation Camaros are among the most recognizable muscle cars in existence. They represent a time in history when Chevy arrived on the ponycar scene to challenge the Ford Mustang's success. Camaros were offered with an array of engines from the factory, and thanks to their large front subframes, a big-block could even be packaged under the hood.
View Photo Gallery | 10 Photos
Photo 2/10   |   1102dp 1969 Cummins Powered Camaro front Three Quarter
Cummins Ponycar
Three years ago, lifelong Chevy fan Jerry Frey picked up the '69 Camaro you see here for a drag car project. When we tell you that Jerry is a technician at Scheid Diesel, it'll make perfect sense why he decided to repower the car with a Cummins. Jerry's quite familiar with the 5.9L engine, so he began thinking about swapping a 6BT into the car. But with your typical 5.9L weighing more than 1,100 pounds, that engine was quickly ruled out. So Jerry turned to the 6BT's baby cousin, the 3.9L 4BT four-cylinder. After all, he knew those engines could be tuned to make up to 600 hp reliably. Plus, the 4BT's overall weight would basically be the same as the big-block it was replacing. Even with a mild engine build, Jerry figured the torque of the little B-series would more than make up for its horsepower deficiency when compared to the big-block.
View Photo Gallery | 10 Photos
Photo 3/10   |   With an approximate weight of 760 pounds, the 3.9L 4BT is comparable to a Chevy big-block in terms of heft, but it packages better. A balanced rotating assembly, Scheid camshaft, and 5,000-rpm valvesprings rest inside the four-cylinder Cummins. The oil pan, block, and cylinder head wear a Chevy Orange paint scheme to pay tribute to the car's GM roots.
4BT Power Recipe
A balanced rotating assembly consisting of the factory crankshaft, shot-peened connecting rods, and marine pistons makes up the bottom end. One of Scheid's custom-ground pulling cams was installed, the cylinder head was fire-ringed, heavy-duty valvesprings were added, and 14mm head studs clamp the head to the block. Thanks to a Scheid-built 13mm P7100 that feeds four 5x13 injectors, plenty of fuel is on tap. The intake air is handled by a Lightning turbocharger, which sends compressed air through an aluminum intercooler before it makes its way into the engine.
Contrary to what you might think, the engine swap was actually pretty straightforward. Jerry started drag racing when he was 16 and began performing engine swaps soon after that. "Engine swaps have always been my thing, I guess," he told us. The setup still utilizes the factory GM frame mounts, some fabricated engine mounts, and a slightly modified factory crossmember.
Still Working On It
Jerry described the car as "a real basket case" when he bought it. But over time, he performed all necessary bodywork, ditched the drum brakes for a four-way disc brake system, installed solid body mounts, and rewired the entire car. And even though the car looks, runs, and drives great, it's still a work in progress. This winter Jerry plans to add a larger turbo and higher-stall torque converter, find more oil pan clearance, and swap out the ring and pinion.
View Photo Gallery | 10 Photos
Photo 4/10   |   The P7100 injection pump hanging from the front gear housing is a 13mm Scheid unit. It benefits from a different cam, full-cut delivery valves, an adjustable fuel plate, and is currently set at 500 cc of fuel.
Whether it's the 4BT's clattering idle, loping exhaust note, or the simple fact that it's a '69 Camaro, the car gets a lot of looks. All it took was a 10-minute ride through town to get people gawking at it, and other drivers waving at us. It's definitely one of the more eye-catching swaps we've ever seen. It's classic Detroit muscle, with pure Cummins power.