King Of The Hill: Silverado vs. Super Duty 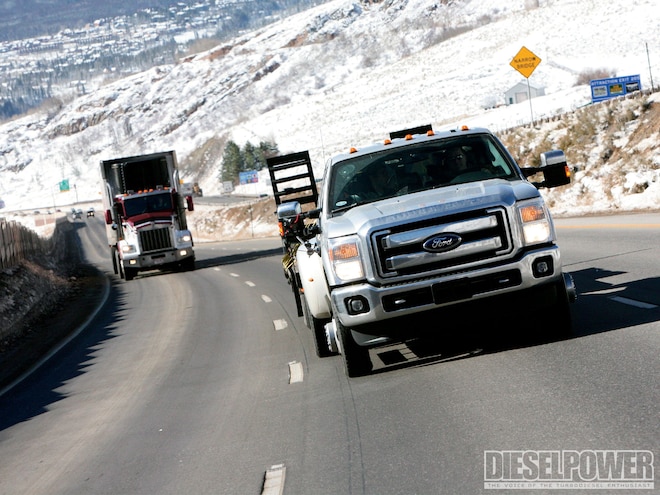 Chevy vs. Ford, Duramax vs. Power Stroke, and Allison vs. TorqShift-these are brand battles that never get old. In fact, for the '11 model year, they've all been reignited!
View Photo Gallery | 10 Photos
Photo 2/10   |   1102dp King Of The Hill Silverado Vs Super Duty chevy Silverado Front Driver Shot With Trailer
When it comes to diesel pickups, we all want the one that makes the most power. And for the first time in years, Ford Motor Company and General Motors offer similarly sized diesel V-8s that are rated to within 3 hp of each other. This horsepower and torque war has been great for our industry, but we want to know which truck does the most with its power. Loyalists and diesel enthusiasts are quickly choosing sides. Ford and GM have launched major ad campaigns touting their trucks as "the most powerful," and even the Internet forums are buzzing with diesel bench racers. It's time Diesel Power settled this feud.
The Benchmark
After our initial testing of each manufacturer's 3/4-ton and 1-ton trucks ("2011 Diesel Truck Shootout," Oct. '10), Ford released a high-output version of its 6.7L Power Stroke. The power increase bumped the engine's output by 10 hp and 65 lb-ft-giving it 3 more horsepower and 35 more lb-ft of torque than GM's 397hp and 765-lb-ft LML Duramax.
View Photo Gallery | 10 Photos
Photo 3/10   |   1102dp King Of The Hill Silverado Vs Super Duty ford Super Duty Front Shot With Trailer
We knew that meant a Silverado vs. Super Duty rematch-but not just any rematch. This time we set out to find which manufacturer builds the most powerful pickup by taking each truck over one of the toughest tows in America, with a gross combined vehicle weight (GCVW) approaching 28,000 pounds.
Ford F-350

View Photo Gallery | 10 Photos
Photo 10/10   |   1102dp King Of The Hill Silverado Vs Super Duty ford Climbing The Mountain
The Shootout
Upping the ante this time, we pitted the two comparably equipped Chevy and Ford dualies against each other, and each truck took turns pulling a 30-foot-long, 18,900-pound gooseneck trailer over our real-world test course. Our 25-mile test loop consisted of an 8-mile eastbound climb up I-70 from Dillon, Colorado. The climb began as a 5-percent grade and transitioned into a 7-percent killer. The starting line for each truck began at 8,776 feet and ended at the Eisenhower Tunnel at 11,000 feet. At that point, we'd turn around on the east end of the tunnel and descend back down the western slope of westbound I-70 to evaluate each truck's exhaust brake and tow-haul mode. The testing was performed at midnight, when traffic on I-70 is practically nonexistent. The ambient air temperature ranged between 5 and 11 degrees F. The test began and ended at the Dillon exit.
Acceleration
The trucks were tested one at a time, launched in four-wheel drive (for best traction), and returned to two-wheel drive at 30 mph. Both trucks were held at wide-open throttle for the entire 8-mile climb. All tests were recorded using a Racelogic VBOX GPS data logger for the most accurate data possible. Quarter-mile, 0 to 50 mph, and top speed were all measured in addition to the one-way elapsed times.
Exhaust Brake
Each truck was then turned around at the top of the hill and driven westbound back through the tunnel. The trucks exited the Eisenhower Tunnel at 50 mph, with their exhaust brakes and tow-haul modes turned on, and the transmissions in a manually selected Fourth gear. The trucks were then allowed to descend from 11,000 feet to 9,000 feet so we could determine how well each of them could control the 18,900-pound trailer.
The Outcome
After our initial '11-model-year-truck testing last summer in Michigan, we were left wondering how the high-output (400 hp) version of the new 6.7L Power Stroke would have faired against the 397hp 6.6L LML Duramax. Surely with 800 lb-ft of torque, the new Super Duty should give the 765-lb-ft Duramax a run for its money in a test of power, right?
Nope. It wasn't even close.
Once again, the Chevy proved to be the superior performer when it comes to acceleration testing. In every towing test we ran on I-70, the Silverado 3500 outperformed the Super Duty F-350. The Silverado made it through the quarter-mile more than 2 seconds quicker, achieved a top speed that was nearly 10 mph faster, and finished the entire climb more than 2 minutes ahead of the Ford. The Duramax performed significantly better at 11,000 feet of elevation as well, pulling the 18,900-pound load at 47 mph, while the Ford slowed to 30 mph. Check out our acceleration testing sidebars for the full results.
Acceleration Test Winner: Chevrolet Silverado 3500
The exhaust brake test brought out similar success for the Duramax and Allison combo. As we began our downhill run, the Ford descended the western slope well but required an average of 14 applications of the truck's brake pedal to hold the vehicle speed between 50 and 60 mph. The exhaust brake was clearly working, but the nearly 28,000 pounds (with four people in the truck) was more than the Ford could control without driver input.
The Chevy, on the other hand, crested the top of the hill feeling like a totally different kind of vehicle. Just by the exhaust noise we could tell the Duramax's Garrett turbo offered far more exhaust braking than the Garrett unit the Power Stroke uses. Going downhill in the Chevy, the driver had far less work to do. While the Super Duty managed the load by hitting the brakes 14 times, the Chevy only required 1 brake application for the entire 8-mile downhill run. While the difference in hillclimbing between the Chevy and the Ford is impressive, the exhaust braking advantage of the Silverado is staggering.
Exhaust Brake Test Winner: Chevrolet Silverado 3500
Fuel Economy Test
Before the tow test began, we drove both trucks 1,250 miles out to Colorado from Detroit. This served as both an initial break-in process, and a fuel economy challenge for the two trucks. Thanks to the fact that a majority of the miles accumulated were in light traffic and on flat ground along I-94, I-80, and I-76, we were able to see what kind of mileage these trucks can achieve out on the open road. Cruising speeds were kept between 65 to 80 mph the entire trip, and drivers swapped trucks at each fuel fill-up.
We found that both trucks were comparable in the mileage department, with the Chevy edging the Ford by less than 0.7 mpg. See our fuel economy sidebar for a complete analysis.
Fuel Economy Test Winner: Tie

Diesel Power
Diesel Power
2005 Ford F-350: Root Beer Float
The 6.0L Ford Power Stroke engine has been maligned throughout much of its existence due to various ...
Chris Tobin – May 7, 2019
Truckin
Truckin
2017 Ford F-350- Platinum Reimagined
If you were told that you could have your dream truck completely designed to your liking what would ...
Phil Gordon – Apr 23, 2019
Truckin
Truckin
2017 Ford F350- Never Give Up
With a story as unique as Justin’s we wanted to bring it to you in a little different manner, so w...
Mike Alexander – Apr 19, 2019
Truck Trend Network
Truck Trend Network
Episode 53 of The Truck Show Podcast: Huge HDisode!
This episode features Kory Willis from PPEI, the 2019 Ram Heavy Duty, the 2020 Chevy HD, and the 202...
Monica Gonderman – Feb 13, 2019
Join Our FREE Truck Trend Network Newsletter