A Rebuilt 7.3L Powered Ford That Powers On 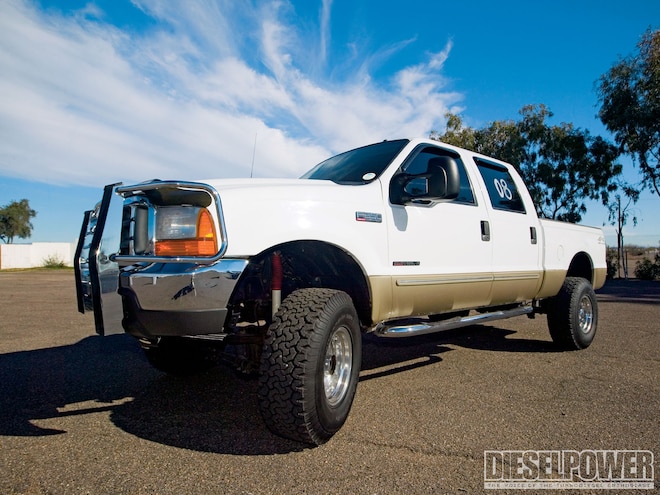 Albie Malone blew up the original 7.3L Power Stroke in his '00 F-250. At that point, he could have bolted in a junkyard engine or ditched the Super Duty all together and started over with a Dodge or a Chevy, but he didn't do any of those things. Instead, Albie decided to use the engine failure (diagnosed to have been caused by injecting too much water-methanol) as an excuse to build the truck to be stronger than it had ever been before. The Ford was already fitted with a DP-Tuner programmer, ITP boost fooler, Ragin' Diesel intake, Gibson 4-inch turbo-back exhaust, Banks intercooler, and Snow Performance water-methanol injection.
View Photo Gallery | 9 Photos
Photo 2/9   |   1009dp Super Duty Resurrection front Three Quarter
Hooked On The Diesel Drug
"That first hundred extra horsepower was easy to get, and I got hooked," Albie explained. "Sometimes I wish diesel engines weren't so easy to modify-I'd be more inclined to just leave mine alone."
Rather than give up or leave the 7.3L alone, Albie pulled the engine and had the block bored 0.030 inch. Nate Brekken at Strictly Diesel in Scottsdale, Arizona, then fit the Power Stroke with Mahle pistons, new connecting rods, and a factory crank. The heads were still in good shape and only received new valve seals and H-11 head studs.
"Sure, I would have liked to have done more, but this rebuild was done on a real-world budget," Albie noted. "I had to strike a balance between added power, reliability, and cost."
Shawn Brown at Ragin' Diesel in Glendale, Arizona, assembled the rest of the long-block and added 238cc injectors from Bean's Diesel Performance. A Turbonetics 61mm ball-bearing turbo was fitted with a Banks BigHead wastegate and Power Elbow. The turbo feeds a pair of Bean's Diesel Performance billet-aluminum intake manifolds to provide enough air for the upgraded fuel system.
Supporting Systems
After upgrading the engine to make an estimated 435 hp and 858 lb-ft of torque on diesel, the rest of the drivetrain needed to be similarly modified to handle the added power. While his truck was down for repairs, Albie wanted to be certain his Super Duty would not leave him on the side of the road again. Thomas Bagley from Black Widow Diesel rebuilt the Ford's 4R100 transmission with a billet-input shaft and Sun Coast clutches. A Brian's Truck Shop valvebody was added to control the shifts, and a Banks torque converter couples the whole thing to the International engine.
View Photo Gallery | 9 Photos
Photo 3/9   |   It looks like just another 7.3L Power Stroke, but most of what has been upgraded is beneath the surface, such as the H-11 head studs and 238cc hybrid injectors. A huge air filter feeds the 91mm Turbonetics ball-bearing turbo with clean air. Behind the filter you can see the controller for the Snow Performance water-methanol injection.
The stock New Venture Gear 273 transfer case and Dana axles have proven reliable in stock form-even when wedged between the Power Stroke's torque and 35-inch BFGoodrich All-Terrain T/A tires. The 35s were mounted on Eagle Alloy rims and fit with help from a leveling kit and air springs in the rear.
While this is a work truck for Albie's construction business, the Ford does benefit from having the upscale Lariat package. The truck still wears the factory two-tone white and champagne paint, and a bedliner has been added to prevent tools and equipment from dents and scrapes. Auto Meter Z-Series gauges in the A-pillar monitor exhaust gas temperature, boost pressure, and transmission temperature. The factory stereo was replaced with a Pioneer navigation unit and Sirius satellite radio, but no other modifications were necessary to make this truck a comfortable daily driver.
On The Track
For our photo shoot, Albie agreed to meet us at Speedworld's dragstrip in Wittmann, Arizona. He expressed hesitation about ripping down the dragstrip, as he had never been to the track before and didn't want to break anything, but Albie Malone isn't one to back down from a challenge. He made four passes with his F-250, each quicker than the last. In the end, he stormed down the track in 13.9 seconds at 95 mph. Without a helmet, Albie wasn't allowed to make any more 13-second passes, but knowing him he won't let this setback deter him for long.