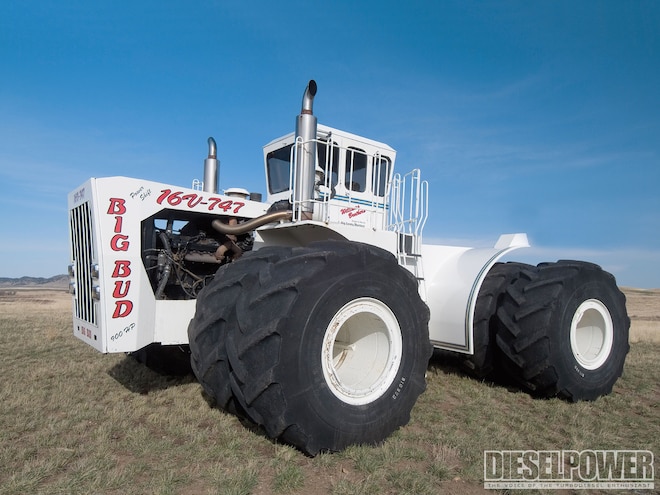 As Americans, we've grown accustomed to having the biggest and best equipment available on the jobsite. As a culture, we're used to 15.0L engines delivering our freight to us and owning 400, 500, and 600hp pickup trucks. Although some of these luxuries could be considered overkill, when the means justify the ends, it's always worth having bigger, more powerful vehicles.
View Photo Gallery | 6 Photos
Photo 2/6   |   Part of the Big Bud's tour through the Midwest brought it to the 2009 Half Century of Progress show in Rantoul, Illinois. During the day, Robert Williams (the current owner) operated the tractor in a test field with a chisel plow attached, and he entered it in a sled pull exhibition that night. There, it lugged two sleds and a small farm tractor (estimated at 70,000 pounds, combined) more than 400 feet, at a steady 7-mph speed. "I'd have taken it the sleds around for a few laps if the officials would've let me," Robert told us.
During the '70s, the average American farm was expanding, and four-wheel-drive-articulated farm tractors were in high demand. By 1972, they were emerging as the fastest growing segment in the North American farm market. As popularity grew, so did power ratings and the size of these machines. But there were still a small percentage of farmers who needed more than what the big-name manufacturers could provide. Ron Harmon, owner of Northern Manufacturing Company-a producer of a full line of custom tractors called Big Buds-had one such customer.
A Reason To Build It
The customer (the Rossi Brothers) was a large cotton-farming outfit in Old River, California, that needed a machine capable of deep-ripping a third of its ground once a year, and in a timely fashion. Since the farm had entertained the idea of using nine D9 Caterpillar bulldozers to do the job, the proposition called for Ron and his lead design engineer, Keith Richardson, to build something larger and more powerful than any model Big Bud tractor the company had ever produced. At the time, no one could've predicted that the final product would hold the world's largest farm tractor record to the present day.
Once constructed, it was named the 16V-747 Big Bud, and it didn't disappoint. The customer was able to lug a 35,000-pound, 80-foot cultivator through the tough, western soil with ease. The farmers even reported the tractor could deep-rip 20 acres per hour and maintain 6 mph.
Detroit Diesel Power
Before deciding on a definite powerplant, a lot of research was conducted. "We looked at several engine options: the 3512 CAT engine, Cummins 1710, and even the 2300 series Cummins (1,150 hp in B form)," Ron told us. "In the end, we thought the Detroit would be a good option for the type of horsepower we were looking for."
But for a tractor that would weigh nearly 100,000 pounds and 135,000 pounds fully ballasted, the strength of two engines would be needed to power it. Detroit Diesel made a V-16 engine, which essentially coupled two 8V92T engines together. Displacing 92 cubic inches per cylinder, the 16-cylinder 16V92T displaced 1,472 cubic inches. Mechanical unit-injection kept the fuel delivery simple, and both V-8 portions of the engine utilized a turbocharger feeding a roots-type supercharger. According to Ron, the V-16 originally made 760 hp. However, he also told us that over time it was turned up to 860 hp, followed by 960 hp. Rumor has it that the tractor can make as much as 1,100 hp if need be, but at the 900hp level it can pull an 80-foot cultivator at an 8-mph pace (impressive even by today's standards).
Proven, Readily Available Components
In order to simplify repairs and keep costs down, the Big Bud was built with readily available components. "We believed in bolting in all the major components-not welding them," Ron told us. "We also designed the framerails (made from 2-inch-thick steel) so you could run almost any manufacturer's engine or transmission."
A lot of the Big Bud's parts were derived from the large mining equipment of the day. For example, the tractor's 85,000-pound Clark axles were used on massive, Michigan L480 wheel loaders. The Twin Disc transmission that utilizes six forward gears and an 18-inch (outer diameter) torque converter could also be found on heavy-duty mining equipment in the late '70s.
The only component no longer readily available is a set of tires. The 8-foot-tall tires (which have Big Bud stamped into the mold) are the original rubber, and the manufacturer is no longer around. "If we ruin a tire, we're probably committed to building another set of huge tires," Robert Williams, current owner of the tractor, told us.
Purpose-Built
The Big Bud was built at a time when no big-name manufacturer could bring an equal machine to the table. It wasn't built to be a giant paperweight-but was purpose-built to work thousands of acres of land, and do it faster than anything else on the market. Another popular machine of the era was the Tiger ST470 built by Steiger. But at just 470 hp, it was easily outmatched.
View Photo Gallery | 6 Photos
Photo 6/6   |   You could say the Big Bud 747 is famous. After its current owners, Robert and Randy Williams (shown) from Big Sandy, Montana, semiretired it from duty in July 2009, it's been on tour. "We took it to the Midwest last summer," Robert explained. "Then one thing led to another, and now they don't want to give it back!"
So, will anyone ever build a larger tractor? Maybe. But, as today's four-wheel drives come with vastly improved transmissions, fuel economy, and 500 to 600hp engines as standard equipment, the same amount of work can be done with a more efficient and compact machine. However, even with all the advances in agricultural technology in the last 30 years, we wouldn't count the Big Bud out of a head-to-head competition. "It can still hang in there to this day-even against the newer tractors," Robert assured us.
Massive Measurements