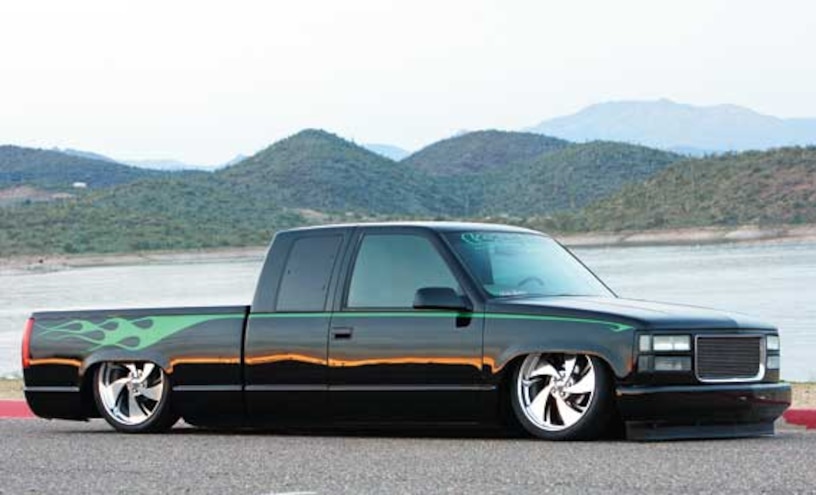 Sometimes you get a customizing bug and can't shake it. You buy a new set of wheels, lower your truck a little, then you can't stop and end up with a fully 'bagged truck with slick paint and a really nice interior. That is exactly what happened to David Null of Mesa, Arizona. He bought his 1997 Silverado in 2003 and until 2007 didn't stop customizing every inch of his truck.
Bringing the truck to Todd Burton, of Lowboy Motorsports also in Mesa, David had them first install a set of Belltech spindles and Slam Specialties RE-7 'bags. They then had to angle the stock upper arms, tub the firewall, relocate the battery, and extend the computer harness so the front would lay hard. Next, Todd moved to the rear where he installed a cantilevered four-link with a K.P. Watts link to locate the rearend. Todd also installed a set of Firestone 2600 'bags and, to get the rear to sit as low as the front, a C-notch had to be cut into the frame. With the frame complete, a set of Boyd Coddington Slayer 22x8.5-inch wheels were strapped on and wrapped in 265/35R22 Toyo Proxes S/T rubber.
View Photo Gallery | 6 Photos
Photo 2/6   |   1997 Chevy Silverado left Side
For a clean look, David had Lucky Luciano, of Phoenix, install a GMC grille shell and shave the third brake light, tailgate, antenna, and bed caps and then install a roll pan. With the bodywork completed and ready for paint, Lucky laid down a coat of Planet Color Black paint and finished it off with a Planet Color Green graphic that turns into flames once they reach the bed.
Inside, keeping with the black and green theme, Lucky painted the dash and several other plastic pieces green to match theflame lick. David then had the seats covered in black and tan leather, sans headrests, and the headliner and carpet was changed to black to match the seats.
View Photo Gallery | 6 Photos
Photo 3/6   |   1997 Chevy Silverado right Side
After completing his project, the last thing David had to do was to drive it hard and show it off. So far, he has taken it to Reso, West Coast Nats, and Severed in the Southwest. Now, David has a feature to finish off his collection. He wanted to send a special thanks to Lowboy Motorsports and Lucky Luciano for the awesome work they did.