Exclusive! Dyno Testing The Most Powerful Diesels Detroit Has Ever Built 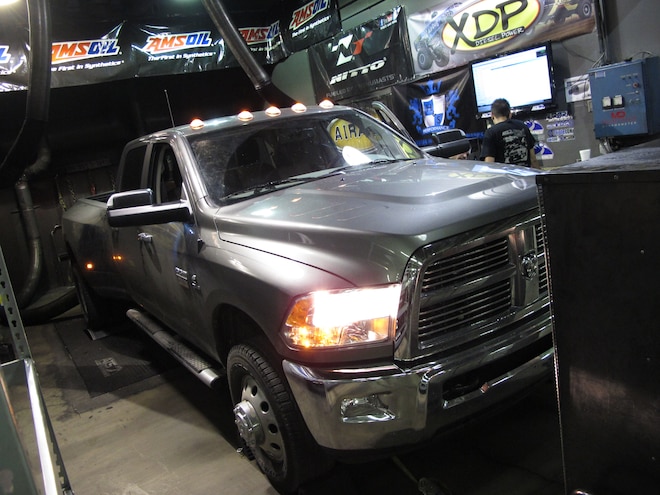 For the 2011 ½ model year, Chrysler has released a new high-output version of the 6.7L Cummins in the Ram. To see how the new engine stacks up against the latest from GM and Ford we traveled to ATS Diesel in Arvada, Colorado, to put all three trucks on a chassis dyno.
View Photo Gallery | 7 Photos
Photo 2/7   |   king Of The Hill Dyno Test 2011 Ram 3500
Brace yourselves Cummins fans.
We strapped down the 2011 ½ Ram 3500 dualie to the rollers first. The guys at ATS made three dyno pulls with the new engine, one in Third, one in Forth, and one in Fifth gear. The results were surprising.
View Photo Gallery | 7 Photos
Photo 3/7   |   king Of The Hill Dyno Test 2012 Gmc 3500
Regardless of which transmission gear we tested the trucks in, the power rankings were all the same. The 2011 Ford F-350 with the 6.7L Power Stroke made the most horsepower and torque, followed by the 2012 GMC Sierra 3500 with the LML 6.6L Duramax, and the new 2011 ½ Ram 3500 with the 800-lb-ft calibration came in third.
We know some of you are going to be shocked by this data (we were), but based on seven other tests we ran these three trucks through—those numbers are the real deal.
View Photo Gallery | 7 Photos
Photo 4/7   |   king Of The Hill Dyno Test 2011 Ford F350
Can’t believe what you’re reading? Want to know more? Check out the November 2011 issue of Diesel Power when it goes on sale October 4, 2011 to read our King Of The Hill—Rematch story. You’ll also want to be sure to read PickupTrucks.com comprehensive report on our test at http://special-reports.pickuptrucks.com/2011/08/2011-heavy-duty-hurt-locker-introduction.html