Truckin's top 10 is reserved for the best of the best. As you will see, these are not trucks that have appeared on the covers from 2011, as the cover trucks were some of the best trucks we featured, hence their spot on the acclaimed cover. We decided to instead give the owners of the rest of the trucks a fighting chance. So here they are, the top ten trucks of 2011. Please vote here for your favorite truck! Think we forgot a truck or would you just like to express your opinion? Send your thoughts to maxwell.matthewson@sorc.com.
Issue 1 R.J. Silva
Las Vegas, Nevada
'91 Chevy 1500
The '88-'98 model years of the Chevy 1500 are very popular trucks for customizing. They can be purchased for a paltry sum and parts for them are plentiful and inexpensive. Because of this, it takes a lot for one to stand out, but R.J. Silva's 1991 version is a definite one-of-a-kind. R.J. started by ripping out the factory suspension in favor of a 'bagged suspension that lets the truck skate on open roads. KRZ control arms, an IF Customs' two-link, and Slam Specialties airbags bring the truck down hard over 22-inch Image Alloy wheels. For a different look on the body, the front clip from a '99 Cadillac Escalade was sectioned, smoothed, and bolted on in place of the factory pieces. A clean shave rounds out the body while AVS LED lightbars were molded into the tailgate skin. After receiving several coats of Jaguar Green paint, it was time to move to the engine. The factory 4.3L engine was replaced with a crate duplicate that also received the chrome and powdercoat treatment. Moving to the interior, R.J. swapped out the factory seats for a set of race-inspired seats that have been wrapped in black leather with dark green accents. Between the seats sits a fiberglass center console that houses two 12-inch Polk Audio subs. The dash has been smoothed and painted to match the truck and an NRC Smoothie billet steering wheel gives an unobstructed view of the Dakota Digital gauges. The rest of the audio consists of a Pioneer head unit, two Polk Momo amps, Polk 6-inch mids, and Polk tweeters. Nicely done R.J.
View Photo Gallery | 11 Photos
Photo 2/11   |   truckins Top 10 Of 2011 1991 Chevy 1500
Issue 2 Dave and Sandy Forman
Everett, Washington
'56 Ford F-100 and '57 Chevy Cameo
A husband and wife team built this duo of trucks. The first is a '56 Ford F-100 that is more Lincoln than it is Ford. The body is all Effie, while the suspension, interior, and engine are those from a '94 Lincoln Mark VIII. In order to accomplish this feat, every seam on the body had to be welded shut and the running boards were molded and welded to the body and fenders, forever turning this Blue Oval into a unibody. PPG silver paint was sprayed over the whole truck. The engine is a twin-supercharged, DOHC 5.0L V-8 from the donor Lincoln. It receives 14 pounds of boost from the dual Procharger P-1SC superchargers, which is then fed through a Lincoln four-speed automatic transmission to a Lincoln 8.8-inch IRS. The interior is all Lincoln while the bucket seats are from a Ford Explorer. The whole of the suspension, steering, and brakes were used from the donor Lincoln. 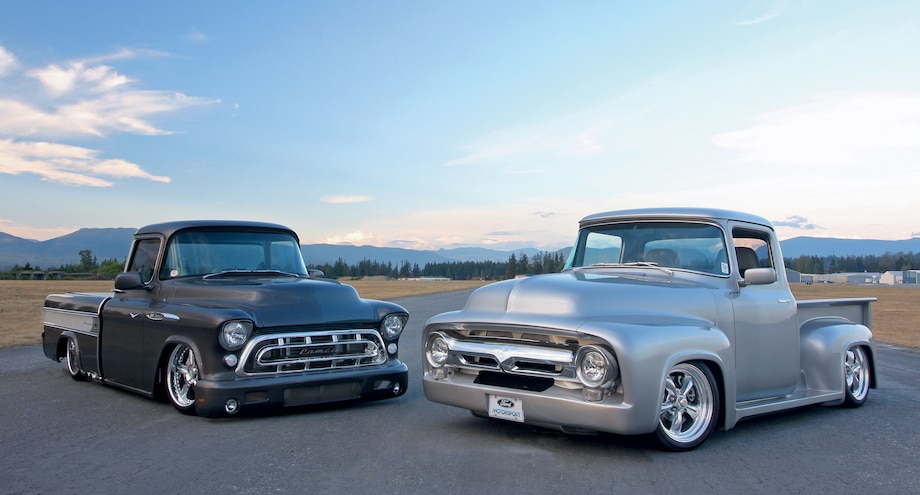 - OF
By Truckin' Staff
78 Articles