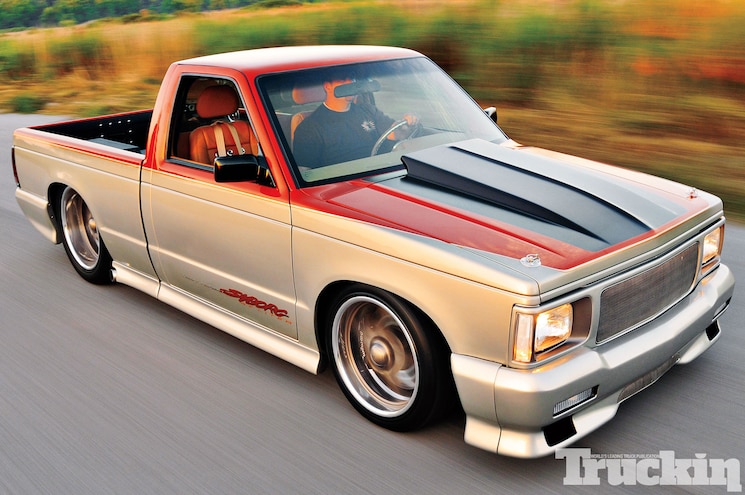 View Photo Gallery | 36 Photos
Photo 2/36   |   1992 Gmc Sonoma Gt in Motion
For Martin McGuire of Downers Grove, Illinois, the GMC Syclone was the truck of his dreams. Martin told us, "I fell in love with the Syclone in 1991, and my goal was to build the baddest S-10 ever." To accomplish that goal, Martin had to first acquire the correct vehicle. In August of 2001, he took one step closer to his goal after pulling the trigger on a 1992 GMC Sonoma GT. Being one of only 806 built, this truck was already unique, but Martin wanted to make it a true one-of-a-kind with performance the GM engineers could only dream about.
View Photo Gallery | 36 Photos
Photo 3/36   |   Opening the hood reveals one of the most sanitary and badass engine compartments in recent memory. Making nearly 800 hp, the twin-turbo 4.7L looks perfect with the black and brushed accents.
The first thing Martin needed to do was bring the truck down in height. Competition Fabrication, in Maple Park, Illinois, was in charge of the altitude adjustment. The first thing was to shed the frame of the body so that the frame could be modified. With added strength and rigidity being the end goal, the front half of the frame was boxed and tubular crossmembers were welded in. Next, the factory front suspension components were swapped out for a set of Ridetech upper and lower control arms, Belltech lowering spindles, and dual-adjustable Shockwaves. For the rear setup, a custom four-link was fabricated and installed along with another pair of Ridetech Shockwaves. To control body roll, Belltech front and rear sway bars were installed. Proper rolling stock is vital to match the design theme of any build, and Martin chose a set of custom-painted Billet Specialties SLG20 18x8-inch and 20x10-inch wheels wrapped in BFGoodrich KDW2 rubber. The brake system was completely upgraded to a full Wilwood system including a dual-reservoir master cylinder, Wilwood 14-inch rotors, and Superlite calipers on all four corners. The next thing Marty had to do was make the truck faster than the factory 4.3L Sonoma GT could ever propel the truck.
Absolutely stunning, Recovery Room bathed the interior in tan leather and added a prototype feel to the truck by paying close attention to the details, like incorporating the headrests into the rollbar. Four-point harnesses ensure Martin stays put when muscling the truck around a track.

Calling on the help of Stan Martin of Rogers, Arkansas, the newly bored 4.7L Bow Tie block was assembled with a new Crower rotating assembly with forged 9:1 pistons and Crane camshaft. ARP bolts ensure the entire engine stays intact with all of the boost being thrown at it. A Cloyes timing chain kit keeps everything spinning in time while new lifters, rockers, and valves were installed in the aluminum Pontiac 449 heads. For even more power, Martin had a pair of Precision Turbo GT3255E turbos and tubing fabricated, installed and wrapped in DEI heat wrap. The compressed air from the twin-turbos feeds into a custom sheetmetal intercooler, through the 75mm Wilson throttle body and into the Hogan sheetmetal intake. A Billet Specialties serpentine belt kit adds a touch of show to all of the go inside the engine compartment. The power is transferred to the ground via a 4L80E, which was rebuilt by Mark Bowler of Bowler Transmissions, in Lawrenceville, Illinois. This sends the power to the Currie 9-inch rearend with 3.70 gears and a True Trac. After updating the Sonoma's stance and go-fast velocity, the next order of business was to completely makeover the exterior.
View Photo Gallery | 36 Photos
Photo 13/36   |   This is what the Sonoma looked like when Martin bought it in ’01. 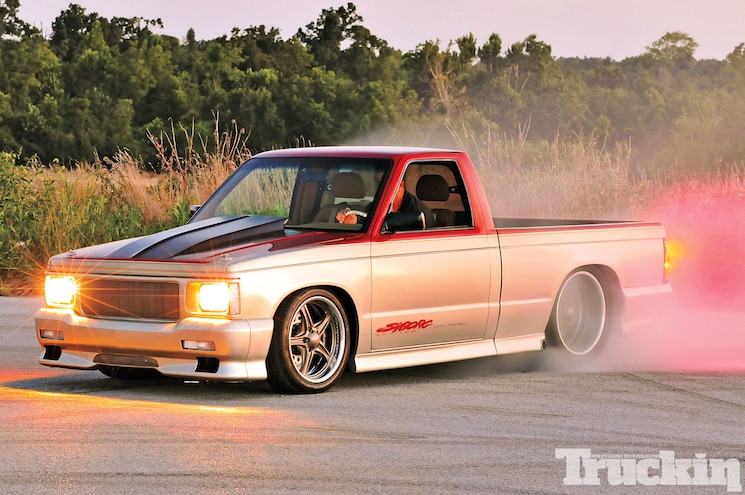 View Photo Gallery | 36 Photos
Photo 20/36   |   One part hot rod, one part muscle truck, the Syborg's stance leaves little doubt that this little monster is ready to handle business out on the track.
Starting up front, Kenny Davis Hot Rods in Rogers, Arkansas, modified the grille shell and lower valance that were filled with custom mesh. The factory foglights were removed and the openings are now used for intake ducts. New foglight slots were cut and lights installed in the bumper. All of the original plastic GT ground effects were removed and molded out of fiberglass for added stiffness, while a fiberglass cowl-induction hood was installed with hoodpins and scuff plates. Under that trick hood, custom inner fenders were made to allow full turning radius. Helping clean up the body lines, the door handles, door locks, tailgate handle, and gas filler door were shaved smooth. In the bed, wheel tubs and a bridge were made out of sheetmetal, and a custom enclosure was built to house the batteries and subwoofer. Kenny Davis Hot Rods could now roll the truck into the spray booth. The top half was covered in 2008 Mitsubishi Spyder Eclipse Sunset pearlescent and the bottom half in '04 Porsche Prosecco metallic. Subaru black granite. was added to the hood for a standout look. Before the truck was cleared, Martin had the name of the truck, Twin-Turbo Syborg, and the engine size, 4.7L, airbrushed on the bottom of the doors. On the home stretch, the last thing for Syborg was a new interior.
View Photo Gallery | 36 Photos
Photo 27/36   |   1992 Gmc Sonoma Gt twin Turbo Syborg
The core of the interior is the handbuilt dash by Competition Fabrication. This houses the Auto Meter Sport Comp gauges, Kenwood head unit, and Vintage A/C controls. The one-off door panels were also built by Competition Fabrication, then the whole interior was covered in light brown leather by Recovery Room Interiors in Plattsmouth, Nebraska. Something we have never seen before is the headrests removed from the seatbacks and remotely mounted to the rollbar. Pretty darn trick fellas. Speaking of the rollbar, 1¾-inch chromoly tubing is welded directly into the frame providing both added safety and strengthening the chassis. To finish off the interior, a matching Billet Specialties steering wheel, wrapped in the same leather as the rest of the cab, was installed. The Kenwood head unit feeds the audio to two Kicker amplifiers that in turn supply sound to two Kicker 10-inch subwoofers, and two sets of Kicker 6½-inch speakers in the doors for plenty of high-quality tunes while Martin is burning rubber.
View Photo Gallery | 36 Photos
Photo 28/36   |   1992 Gmc Sonoma Gt billet Specialties Slg20 Wheels
We can say without a doubt that Martin's Sonoma GT is the baddest one we have ever seen. It was a long, eight-year process, but in the end, Martin accomplished his goal of building one amazing Sonoma. He wanted to say thank you to all of the companies that aided in the build as well as all of the shops that worked on it. Now all that is left to do is get out to a track and smoke the tires. Camaro, Mustang, and Challenger owners, you've been warned.
Inside the Build