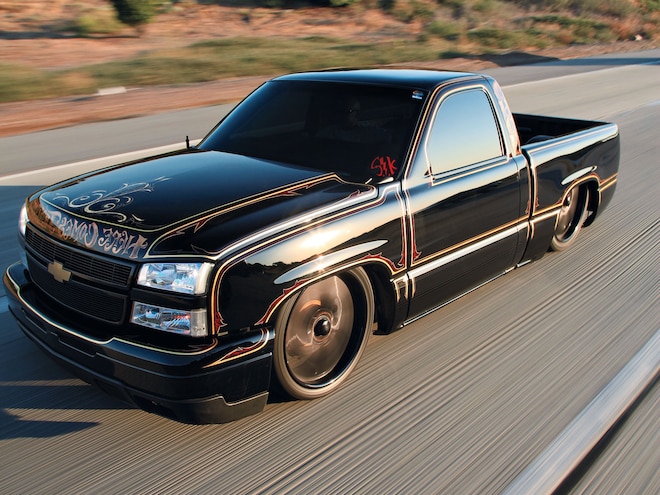 View Photo Gallery | 22 Photos
Photo 2/22   |   2006 Chevy Silverado pinstriping
The custom truck scene is full of people that follow the latest trends. They build whatever is "cool" at the time. It's the guys and girls that step outside the trendy boundaries and build something off the wall that grabs the attention of passersby. Jay Penfield, of Fresno, California, did just that. Instead of building something big, long and lifted, like the majority of Central California was building at the time, Jay wanted something short, chopped and blacked out. To achieve this, Jay needed the shortest truck possible, and he proceeded to buy a regular cab 2006 Chevrolet Silverado. Since the regular cab came with a 6-foot bed, Jay decided to put the 5-foot 8-inch bed from a Crew Cab on his regular cab to make it that much shorter. But that's only the beginning of this story.
View Photo Gallery | 22 Photos
Photo 3/22   |   2006 Chevrolet Silverado Here Comes Trouble web Extra Photos
To start the conversion Jay took the truck to Dalton Walker, in Fresno, and had him shorten the frame in the rear in order for the Crew Cab short bed to fit on the truck. While in Dalton's hands, the rear triangulated three-link was also built and the frame was gusseted and cut down 2½ inches for a stock-floor body drop. Jay picked the truck up and took it to his house where he would finish the rear suspension and 'bag the truck with the help of his friends Tom, Scott, and Travis. Tom Sippel painted the frame and link bars for a finished suspension.
With the truck laying frame on 22x8.5 and 24x10 Intro Twisted Vista II's, Jay pulled the hood off and assessed the situation in the engine compartment. Not being at all satisfied, Jay called Montgomery's Auto Body, also in Fresno, and had them paint a Cadillac engine cover and radiator shroud. While that was happening, Jay installed an aFe intake, Edelbrock shorty headers, and custom exhaust for easy breathing. To clean up the engine bay, Jay re-routed the fuse box and relocated the battery. With the engine taken care of, it was time to make the body look so good it would cause severe rubbernecking.
For the body, Jay took the truck back to Dalton Walker for a haircut. In 5 days, Dalton chopped the top 2¼ inches, leaned the front glass back, and shaved the mirrors. From there, the truck was taken to Montgomery's Auto Body for further shaving and paint. After several coats of black paint, Kool Hand Luke came in and laid on the gold leaf and pinstriping for a completely different look.
View Photo Gallery | 22 Photos
Photo 7/22   |   2006 Chevy Silverado tailgate Pinstriping
The capstone of Jay's truck was the interior. For this, he took the truck to Central Valley Upholstery, in Hanford, California. The first step was to remove the plastic pieces that were going to be painted. Those went back to Montgomery's Auto Body, while Jay and the guys at Central Valley Upholstery finished the rest of the interior. Jay added the bench seat, cut it down, and leaned it back to accommodate the chop top. He also cut down the A- and B-pillar covers. The bench seat, door panels, and passenger airbag were covered in tuck and roll vinyl. A Ryno MFG billet steering wheel was installed and billet A/C vents were anodized gold and installed.
With his truck finally complete, Jay is stoked to be driving it. He said that the truck rides amazing and has perfect alignment when it is 1-inch off the ground. The only thing Jay wishes he didn't do was paint the truck black, because it is so hard to keep clean, but other than that he wouldn't change a thing. He wanted to send a special thanks to Meg, Scott, Travis, Dalton, Mom, Dad, Brenda, Ray, Tom, and Chad.