Laid-Out Excursion on 28s with a 500hp Cummins Diesel 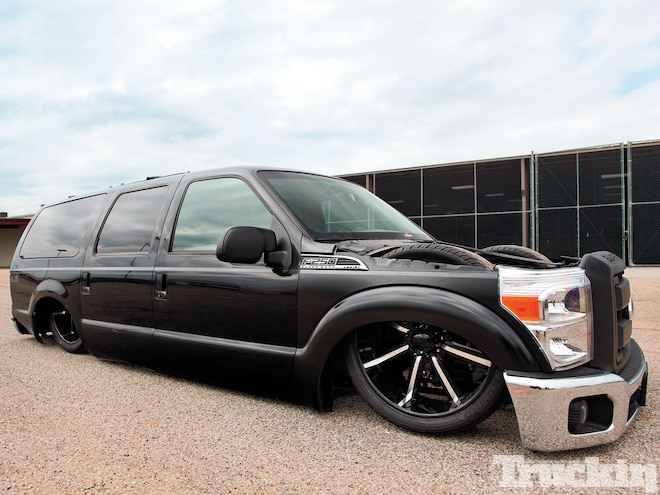 It just makes you shake your head. Seeing a giant Excursion on the ground with equally giant 28-inch wheels stuffed under each fender is a thing of beauty. Combine that wheel-stuffing stance with a 2011 Super Duty frontend and plans to add a 500hp Cummins turbo-diesel and you have yourself a fullsize SUV of epic proportions. For Mark Fehrle, of Tomball, Texas, it’s just another day of work heading up Slaughter House, a custom suspension and metal fab shop. Working on customer’s cars makes spending time on his own project a virtual impossibility, but when the shop’s doors are closed, Mark sneaks in and fires up the welders.
View Photo Gallery | 9 Photos
Photo 3/9   |   2002 Ford Excursion ford Badge
Creating a new firewall-forward frame, Mark brought in the framerails 8 inches to accommodate the narrow Cummins diesel engine he has planned for it. Speaking of which, Performance Truck Products, also of Tomball, is rumored to be wrapping up the engine with a big 68mm turbo and 150hp injectors that should help the straight-six pump out more than 500 hp. With custom upper and lower A-arms cut on his CNC plasma table, Mark was able to add a unique look to tubular supports. Chevy 8-lug spindles from a 15-passenger Express van were modified to accept the Uniball mounting configuration, and massive Firestone 20C big-rig ’bags provide the up and down motion. Icon bypass shocks damp the front, while a Mustang II rack and pinion delivers the steering input. Out back, a two-link with diagonal link is connected to the narrowed axle that was modified with Chevy 8-lug axles. Thanks to this unique suspension setup, and with a ton of cutting, the Excursion is set up for 30s and 32s, but for now it lays out on 28-inch DCenti DW903 wheels wrapped in 37-inch-tall Kumho tires.
View Photo Gallery | 9 Photos
Photo 4/9   |   2002 Ford Excursion 28inch Dcenti Dw903 Wheels
Freshening the looks of his big Ford, Mark added a 2011 Super Duty front clip on the nose, and plans on modifying the rear barn doors to accept the newer Super Duty font. His bodywork plans are simple: Paint the entire SUV Lamborghini bright blue, shave the barn door hinges, and add a T-Rex polished billet grille. Interior ideas are still being entertained, but Mark is adamant about one thing—he’s going to drive it.

"“With the front 'rails being so narrow for the Cummins, I almost have full turning radius laid out on 28s."