This 2012 Sierra is Unmistakable 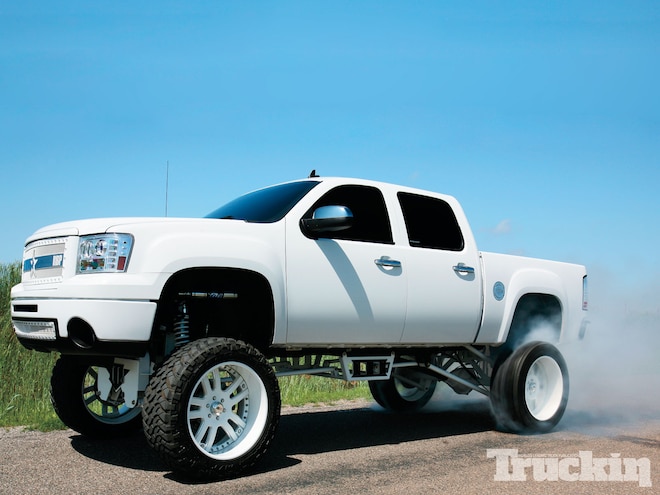 View Photo Gallery | 11 Photos
Photo 2/11   |   2012 Gmc Sierra rbp Striker Wheels Motion
Having built several ¾-ton diesel-powered HD trucks in the past, Cody Elkins of Weatherford, Oklahoma, wanted to change the pace and build a ½-ton gas truck. Since this truck would be different, Cody wanted to try some things that he hadn't tried with the other builds and really put his new Sierra at the top of its game.
To start off, Cody bought a 2012 GMC Sierra Crew Cab with the optional 6.2L engine. Even with 403 hp at the crank, the 6.2L didn't have enough power for Cody, so off to ProCharger he went. After installing a P-1SC-1 intercooled centrifugal supercharger system, the truck was boosted to almost 500 rear-wheel horsepower. For added breathability, the truck was taken to Automotive Excellence, also in Weatherford, to install a set of Kooks custom long-tube headers and a 4-inch Magnaflow exhaust system for a deep, throaty sound.
View Photo Gallery | 11 Photos
Photo 3/11   |   2012 Gmc Sierra procharger P 1sc 1
Next, it was off to B&C Offroad in Pasadena, Texas, to really make the truck high and mighty. Just like Cody's previous builds, a normal lift wouldn't suffice. Owner of B&C Offroad Kevin Russell and his crew installed a 14-inch 3rd Coast suspension lift. This consisted of giant spindles and control arms that were paired with Fox Racing coilovers up front. Out back, a custom four-link suspension was built with the mother of all Watt's links. The rear is also supported with an Airlift helper 'bag system, which allows for a smooth level ride no matter what is in the bed. Finishing off the aggressive stance is a set of RBP 24x12-inch Striker wheels wrapped in 38x13.50R24 Nitto Trail Grappler M/T tires.
Returning back to Oklahoma, the truck's next stop was at Oklahoma Customs in Oklahoma City. While in the hands of Mark Parks, Brent Carder, and the rest of the guys, the interior was completely gutted. Six boxes of sound deadening material were applied to the inside of the truck to improve sound quality, and bring in a vault-like quiet when cruising. The wiring of the audio system was then started while a few interior pieces were at the paint shop. A Pioneer head unit was dropped into the dash and four sets of Kicker IS 6½-inch components were molded into the doors, kick panels and A-pillars. Under the rear seat, a custom box was built, housing four Kicker 8-inch L7 subs. This was all wired up to four Kicker IX amplifiers. A pair of Optima deep-cycle batteries provides plenty of power for the 20-speaker sound system.
With the audio taken care of, Cody could turn his attention to the remainder of the interior. Going with a classy black and white theme, Cody picked up a new set of U.S. Speedo gauges with black faces and white numbers and needles. Divine One Customs in Las Vegas shipped out a set of Katzkin leather seat covers that Oklahoma Customs installed, along with a black suede headliner with white stitching to match the seats. To finish off the interior transformation, Luxer 1 LED lights were installed in the factory locations for ultra-bright illumination.
View Photo Gallery | 11 Photos
Photo 4/11   |   A killer sub box under the back seat houses four 8-inch Kicker L7 subs. The four amps for the system are built into the bottom of the seat.
Moving to the exterior, Cody liked how the GMC looked but still wanted to add his own flair to it. To do this, he had Oklahoma Customs paint the bumpers and grille surround to match the truck. They followed that up with an RBP grille insert and a set of Recon headlights with HIDs and LED taillights. Finally, 28 Luxer 1 LED spotlights were strategically placed under the truck and behind the grille to really set this GMC above the rest.
At this point, Cody really loved his truck, but it still didn't have the neck-snapping power he desired. This is when Injected Speed Shop in Ft. Smith, Arkansas, came to the rescue. Chris Brewer and Robbie Bryant tore the 6.2L down to the bare block. They started by stroking the engine out to 416 ci and boring the heads. Then, using all forged components, they rebuilt the engine. Manley dish pistons with Hellfire rings were dropped into each cylinder and connected to Probe Industries rods and a Manley 4340 crank. Comp Cams was used for the camshaft, lifters, and pushrods. Jim Parkison came in and applied a custom laptop tune, and on the engine dyno, the LS pumped out 650 hp and 600 lb-ft of torque at the crank.
Finally, Cody has a ½-ton gas truck under his belt. Not only does Cody use it to haul his matching Harley Rocker to shows all over the country, he drives the tires off it day in and day out. He wanted to send a special thanks to B&C Offroad, Oklahoma Customs, Injected Speed Shop, Josh Bray, and everyone else that helped make this his idea a reality.
View Photo Gallery | 11 Photos
Photo 8/11   |   When the weather is nice, Cody can let his hair out and cruise on his matching Procharger-powered custom Harley Rocker.