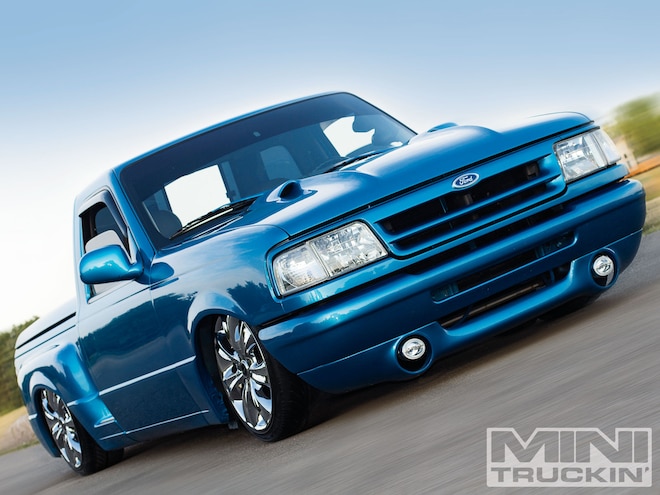 This month's Ridin' Around winner will receive a super badass t-shirt from Grant Kustoms (www.grantkustoms.com). Wear it proud! For your chance to win, submit photos and truck info to mini.truckin@sorc.com.
View Photo Gallery | 5 Photos
Photo 2/5   |   ridin Around December 2012 grant Kustoms

View Photo Gallery | 5 Photos
Photo 3/5   |   ridin Around December 2012 1994 Ford Ranger Splash
Sit N Low
Every now and then we get wives or girlfriends who submit pics of their guys' trucks for us to surprise them with. Melissa Bruno did just this. She says her man's Ranger has lots of Ride Tech goodies, 18- "or" 20-inch wheels, Lincoln Navigator seats, full tweed interior, and way more to list here. After having their daughter, the truck hasn't been taken out of the garage too often. It might be up for sale, but the final decision hasn't been made just yet. We vote keep it, and buy a car seat for the rug rat. 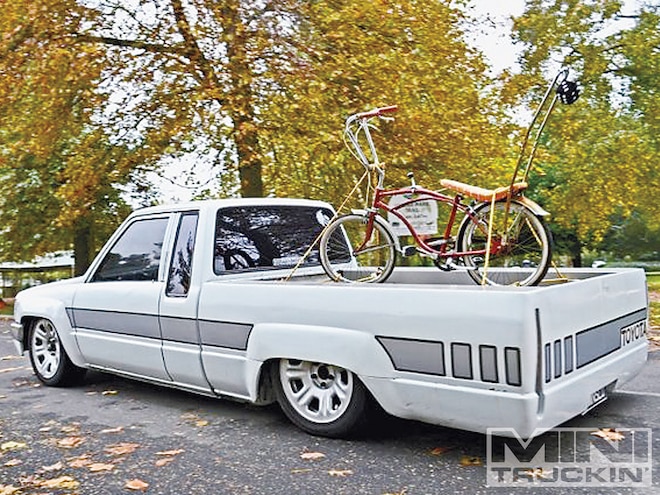 View Photo Gallery | 5 Photos
Photo 4/5   |   ridin Around December 2012 1984 Toyota Hilux
Flossy Aussie
We've heard that a true Aussie likes beer, but doesn't drink Foster's. Oh, and they aren't Men At Work fans either. But since Mathew didn't confirm this, we'll just have to sit here and wonder. Anyway, his Toyota is pretty cool. It was 'bagged by Matt at 666 Customs in Churchill, Victoria, Australia, and it's shaved all around and has 4x4 sheetmetal. Looking good, mate! 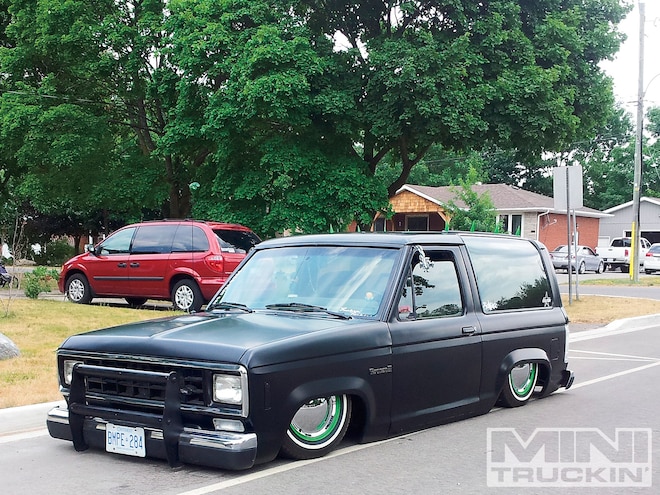 View Photo Gallery | 5 Photos
Photo 5/5   |   ridin Around December 2012 1988 Ford Bronco Ii
Bronco Obama
We didn't name this truck, its owner did. And he's damn proud of it. We'll admit it's funny, but would you really want to name your truck after the president? Given this Ford's owner's name, and his residence in Canadia, we're guessing he doesn't give a half crap about taking things too serious—right on brother! Dirty says "It's juiced with a 'Yota front clip and Eddie Bauer edition interior. I built this truck to drag the sh*t outta it and have fun. Hope you like it." Like it we do, Mr. Cox.

- OF
By Kevante Higgins
14 Articles