Man Up and Pull It Off 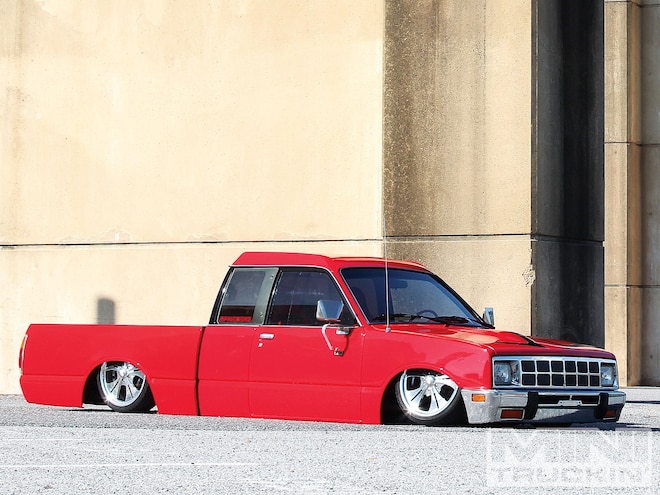 View Photo Gallery | 13 Photos
Photo 2/13   |   1302mt 01c 1986 Isuzu Spacecab Bodydropped
It takes a special type of person to build an Isuzu Spacecab. It's one of the holy grails of minitruckin' what with the rarity of the vehicle in general, plus the mammoth amount of extra room placed behind the rear seats. But in the tiny sub-scene of Spacecab builders, there's an even smaller group that goes with the '86-'87 models—the second gen Isuzus with the flat grille and Chevrolet LUV styling. That's where Johnathon Cobb fits in, just like a square peg in a round hole.
There's a reason why people don't build these trucks. They're hard to find for one, as the Chevy LUV soared in popularity while the P'up sat on showroom floors. But for Johnathon, his interest came from his family. When he was just 15, his grandfather passed down an Isuzu P'up to the future minitrucker, and two years later it was lowered and kissing the concrete. As they say, it was all downhill from there.
View Photo Gallery | 13 Photos
Photo 3/13   |   1302mt 03 1986 Isuzu Spacecab Microphone Shift Knob
Johnathon built other things along the years including a few fullsize and lifted trucks, but he always seems to find himself coming back to the Isuzus. The decision was made recently to conquer the rarest of rare models of Spacecab, the '86-'87. See, Isuzu only produced these trucks in limited runs, probably because of the funky roof and adjusted construction process, so there aren't many on the road today. Finding this truck was going to be difficult, but then he told his friend Cris Collins about the concept, and he revealed that he had one that his father had given him. It was a one-owner truck, and it was parked with a blown motor—perfect for what Johnathon was looking for. Problem was, Cris wasn't selling it.
After what seemed like forever, a deal was finally reached between the pair: Johnathon traded Cris straight across for a Mazda pickup, and the Spacecab was towed home. Then the work began.
The motor was swapped out for something that worked, and then he just drove it, enjoying the truck for what it was. After lowering it, then bagging the truck, things snowballed into a paintjob and bodywork. By Spring Fling 2008, it was good to go and taking trophies.
But like most projects, Johnathon figured it was time to move on, so he did, selling the truck to Trent Scarborough. On his end, Trent installed a new interior and took pretty good care of the truck, but eventually he sold it to a member of Freaks of Nature named Dave, who promptly blew up the second motor. After tracking down the truck, Johnathon decided he wanted it back and took it off Dave's hands. It was time to get crackin' yet again.
Flash to December of 2011, and Johnathon is the middle rebuilding the truck, first with the bodydrop then with new paint, bodywork and interior. After a lot of late nights, the truck was finished off just in time for the Relaxed Atmosphere show in 2012 where it took home honors for best interior.
View Photo Gallery | 13 Photos
Photo 7/13   |   1302mt 11 1986 Isuzu Spacecab Decal

View Photo Gallery | 13 Photos
Photo 8/13   |   1302mt 10 1986 Isuzu Spacecab Boyd Coddington Nemesis Wheels
Owners of Spacecabs are a special breed, as Johnathon proves. Not only will they go all out to build their trucks, they'll even do it twice, as was the case here. So what's next for the truck? Chances are pretty good that Johnathon will sell the Isuzu to someone, that way he can move on to another project. But one day, he'll be sitting in front of the television when he remembers The Scab and all it's meant to him. That will be the day that he does some research, finds the new owner and gives him some cash so he can have his Isuzu back.
And we'll be looking forward to see what he does with it the third time around.
Owner: Johnathon Cobb
Ride: 1986 Isuzu Spacecab
Hometown: Phenix City, AL
The Lowdown