Sick of Being Square 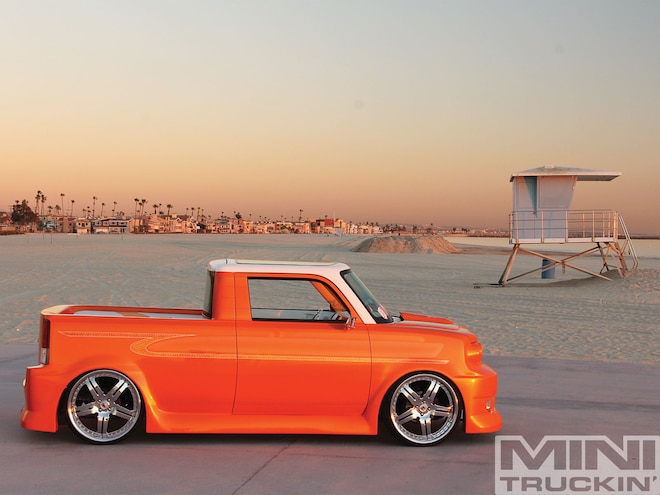 View Photo Gallery | 12 Photos
Photo 2/12   |   exbox 2006 Scion Xb
There's a few good reasons why you've probably never seen this chopped up first-gen Scion: One, well, it's a Scion; two, it was just completed this past September; three, the few times it has been out on display, it has mainly been at DUB shows. Luckily, our paths crossed with a Mr. Rodney King (nope, not THAT Rodney King—he's dead) who just so happens to own this little slice of shiny orange weirdness. After chatting him up for a bit and asking why he would cut the crap out of a perfectly good commuter car, we found his answers intriguing enough for us to invite him to a sunset walk on the beach. The story and photos here are the records of our date.
"We had a vision, ha-ha," says Rodney through laughter about the outcome of the three-year construction (or deconstruction) of his xB. "She was first cut back in 2009, and we had fun cruising her around in primer and raw metal until 2012 when we started hitting the shows. It was reassuring to take home a couple trophies the day after finishing the build." The uncertainty of finding out how people would react to such a creation must've been unsetting to say the least. Despite the naysayers and some rough waters Rodney had to sail through to get to this point, he's managed to stay positive and keep the bullsh*t at bay.
The late afternoon conversation with Rodney hovered around the process that went into making a truck out of a van/car/bus or whatever you'd call an xB. He stressed the fact that finding someone talented enough to pull off the transition was a mission in itself, and shelling out money to make it all happen, even when there wasn't any laying around, was only half the battle. The talk drifted into tangents about love, relationships, and then paused whenever flocks of roller skating beach bunnies cruised by. Then, the real discovery of Rodney's tendency towards pickups made itself clear when asked about what other types of customs he's owned in the past. "Back in 1987, I was in a club called Street City Minis out of the South Bay area of LA. I had an '87 hardtop convertible Nissan Hardbody. The group was pretty big for a while but didn't last for too long." Should've known this guy had to come from a minitruckin' background.
As day turned to night on the Long Beach shore, the amount of strangers that had walked over to take a cell phone pic of the truck, surely for Facebook status ammunition, was steady all afternoon. They all seemed to genuinely dig the truck. Maybe it's the flashy paint and the lowered stance? Possibly. But the safest bet is that they were utterly clueless as to what the hell kind of truck they were looking at—all they knew was that they liked it. And in that respect, Rodney's vision is as successful as he needs it to be.

"Should’ve known this guy had to come from a minitruckin' background."

"Thanks to my brother John King for making this all possible for me, and to everyone who shows the truck love everywhere we take her."