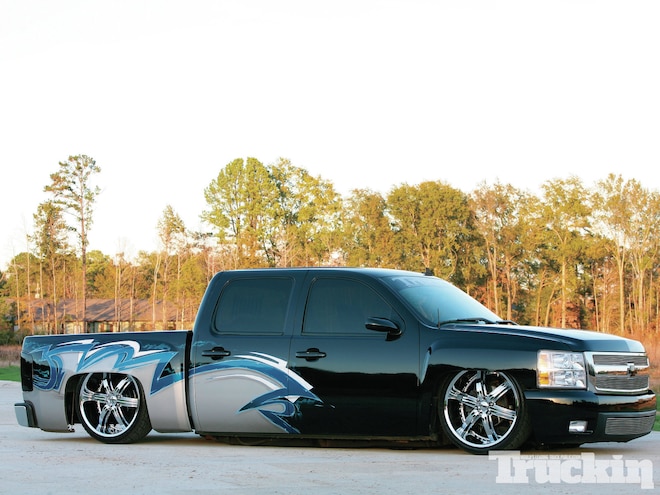 View Photo Gallery | 6 Photos
Photo 2/6   |   2009 Chevrolet Silverado 1500 right View
There are two distinctly different types of custom truck fans out there, the lifted guys and the lowered guys. However, there are some who ride the line and like both styles of truck. Bo McElwee of Princeton, Louisiana, is one of these select few. So, when he picked up a 2009 Chevrolet Silverado, he racked his brain trying to decide which direction to take it. Eventually, he opted to take the truck to BNC Offroad and have a 14-inch 3rd Coast Suspension lift installed. After enjoying that for a while, Bo realized that he would rather have a 'bagged truck, and did what any sane truck owner would do—pulled the truck apart and rebuilt it. To accomplish this, he enlisted the help of his brother Dusty.
Bo and his brother started the build by pulling the lift kit off the truck and starting fresh. Up front, new control arms from Ekstensive Metalworks were bolted on, allowing the truck to tuck 24-inch wheels. To this the brothers added a pair of Slam Specialty SS-7 'bags fed by 3/8-inch hard lines and SMC valves. Happy with the front, Bo looked into bringing the rear down to match. To do so, he and his brother fabricated a two-link and bolted on a KP Components Watt's link to locate the rearend. Another pair of Slam 'bags were installed over the axle and the rear was wrapped up. Capping off the suspension, a set of 24-inch Dub wheels was wrapped in 295/30R24 Fullway rubber and bolted onto the truck.
Bo had the truck painted back when it was lifted sky-high. The paintjob consisted of a black front half leading into a graphic that consists of Voodoo blue, silver, and white with some real fire flame accents. Kyle Carter of KC Kustomz, in Dubberly, Louisiana, did all of the paintwork. The custom paint is also found inside, where many of the factory plastics were sanded smooth and painted silver.
Painted plastics aren't the only custom touch inside the Crew Cab. The seats were all wrapped in black leather with silver alligator inserts by Ray Miller, at Miller's Upholstery in Bossier City, Louisiana. Bo's brother handled all of the audio to make the truck sound like a rolling concert hall. This consists of a Pioneer head unit, a Memphis 1100 monoblock amp, and two 12-inch Kicker SoloBaric L7 subs. With that complete, all Bo had to do was add some color under the hood and he was all done. Lowered or lifted, this Silverado was built to drive and drive hard.
Inside the Build