1991 Nissan Hardbody - A Lesson To Be Learned

Preparing For The Unknown 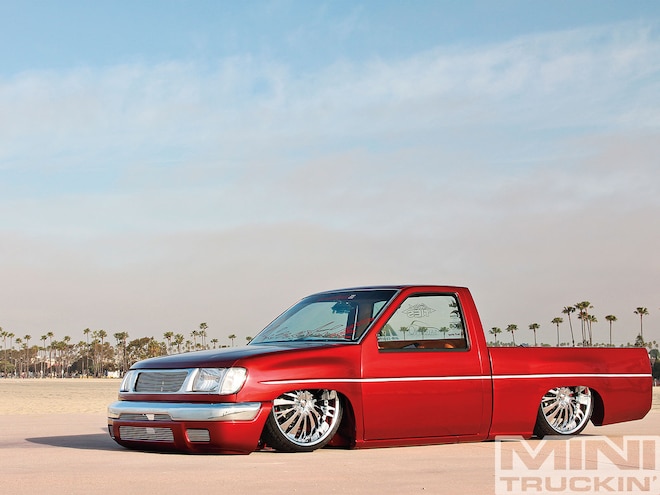 Over the course of five years, Kimery Uhl went through four different renderings for his Hardbody—all with different body modifications, wheels, and color schemes. First, it was going to be painted black, then a shade of blue came along that changed his mind, but not enough to keep him from going back to settling on black. As you can see, the truck ultimately ended up being sprayed a vibrant raspberry hue. But that's just how the build started off—there were so many possible directions to take his Nissan, and one seemed equally as promising as the next.
"We started off with the truck body dropped and juiced on 20s, then decided that it needed to be on 22s so we sent it to Salt Lake City for a back half but ended up scrapping the whole truck instead and starting over from the ground up. There is not a single part of the truck that we took to Salt Lake City that is part of the finished truck," Kimery says. And with the process heading towards constant shape shifting, he just went where the truck took him.
Just going along for the ride wasn't all Kimery had to worry about. Along with the scrapping of plans and starting from scratch, he had to deal with no good, rotten thieves messing up the program. "The shop the truck was being built at was broken into two weeks before SEMA last year. A set of 22-inch wheels, tires, a chrome brake booster, wiring harness, and a bunch of tools were stolen. In order to make it to SEMA, we had to come up with replacements within a couple of days, which meant spending a lot of money on express shipping and calling in a few favors from friends." Having that amount of high dollar items taken away would be enough to stop any build dead in its tracks, especially with a strict deadline lurking so closely. "We ended up not finishing the truck until midnight the night before SEMA roll-in. We made the seven hour drive to Vegas on no sleep, and made it in time for roll-in."
At the end of this banzai mission, Kimery still finds himself in disbelief. When this project started, he had no clue just how far off he'd be from his original, humble plan. "The truck was never supposed to be this elaborate. I just wanted a super clean, bodydropped, everyday minitruck, but once we started paying attention to every detail, it was nearly impossible to keep the build as simple as we intended." Never has a lesson in dedication been so brutal.

Special Thanks From Owner
“Most importantly, My wife Toni for letting me dump money into this heap over the last 5 years, my daughter Annabelle because now she has to go to Duke instead of Harvard, Mike Salerno at Salerno Custom Paint for getting it done and to Shalee Allen for letting him get it done, Chapy Andrews at Sinister Fab Werks, Erik Harbour at Kinetik, Robin and Jason at Powerbass, Ron Perkins, Paul at Air Zenith, Brady Smith and Lance at The Hi-Fi Shop, Tom at Discount Auto Body Supply in SLC, Chris ‘ooooooh’ Schnell, Sean ‘F.R.A.B’ Wigman, Jorge ‘Taliban’ Verdeja, Ron Lindquist, Nate Herrman, Skinny, Big John, and all of my Severed Ties family except Jason Lekvold and Kevin ‘Flip’ Lovato!”