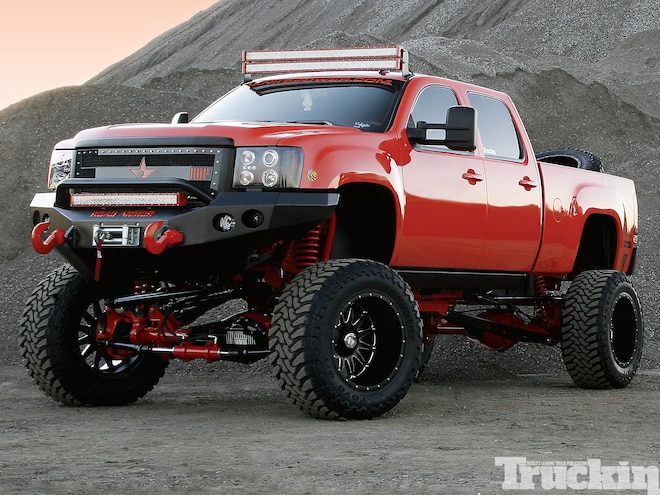 High-end, heavy-duty trucks have been inundating the work force for the last few years and with good reason. It makes sense to buyers to have a capable diesel 4x4 truck with the high-class amenities of an expensive sedan. After all, the interior is where we spend the majority of our time in our trucks anyway. Having driven from coast to coast in a fully equipped GMC Sierra HD 2500 Denali 4x4 diesel, we can attest to being spoiled by the air-cooled leather seats while towing for thousands of miles through our country's southern heartland. However, those niceties come with a heavy cost. With a well-equipped sticker price north of $60k, the Denali trucks are rarely seen running around in any serious custom form. Travis Sweigart of Shingle Springs, California, sought to change that.
Although Travis hails from Northern California, he originally purchased the GMC in Texas to make it easier to receive a lift kit from B&C Off Road in Pasadena, Texas. Wanting something large and in charge, Travis ordered up a 16-inch system with a four-link rear suspension. Dual Fox Racing shocks were hung at each forward corner, while a pair of 2.5-inch Fox Racing coilover shocks was employed out back. All that height was beyond adequate to roll on 40-inch Toyo rubber, and after being delivered to California, Travis was content to drive the truck in that format for about a year. He eventually got tired of the truck and desired a more serious customizing effort. After a meeting with Nick Germano of Outkast Kustoms, in Newark, California, a whole new plan of attack was blueprinted.
Nick partnered with Owen Sharpe of Top Shelf Customs in Modesto, California, to ensure the big picture was brought into view. Once in house, the pair tore off the gigantic dropped front subframe for the IFS and proceeded to cut off every bracket on the frame pertaining to the original front suspension. A Dana 60 straight-axle was sourced from the '05 and newer Ford Super Duty truck line and stuffed with 4.56 gears and a Solid Axle Industries SpynTec free-spin conversion kit. Engaging the four-wheel-drive system is now handled by a Ford transfer case to address the front straight-axle conversion. A one-off four-link was designed with Ballistic Fabrication forged 3-inch ultra-duty joints to hold the axle in proper position. Out back, the original brackets on the axle were kept and a new four-link with Ballistic joints was designed to alter the geometry for better functionality. Controlling the truck is the original steering box with a custom Rare Parts Pitman arm working with a PSC hydraulic ram setup fit with EMF rod ends that turn a Full Throttle Suspension high-steer knuckle. Suspending the truck are 12-inch stroke front and 10-inch stroke rear King 3.0 coilovers. Toyo 40x15.50 Open Country M/T tires on 22x14-inch LRG 103 wheels roll on the streets, but when the road ends and the sand dunes begin, a set of one-off 40-inch Skat-Trak paddle tires are swapped on for gigantic rooster tail action.
View Photo Gallery | 13 Photos
Photo 2/13   |   2011 Gmc Sierra Hd Denali 4x4 Profile Shot
Ordered in the factory Onyx black, Nick and Owen knew that a truck with this much effort required a serious color to ensure all eyes would be fixed on it. Everything that could be unbolted from the frame was powdercoated industrial orange or gloss black by Cal Hot Powder. To match that, the whole truck was wrapped in orange vinyl from stem to stern. Road Armor bumpers front and rear were adorned with Monster Hooks, while an RBP grille and Tire Gate round out the major exterior modifications. The sand dunes can be unforgiving at night, so dual 50-inch Bulldog Bone LED bars were color-matched and mounted on the roof. As if that wasn't enough, an additional 30-inch Bulldog Bone LED bar was strapped to the front bumper. Powering the GMC is the 6.6L turbodiesel LML Duramax with a few goodies to ensure Travis has enough power to climb even the highest sand dunes. A Banks Ram-Air intake system was combined with a stainless 4-inch Monster exhaust for better breathing. Controlling the mixtures is a Banks programmer and Banks iQ 2.0 man-machine interface.
View Photo Gallery | 13 Photos
Photo 3/13   |   2011 Gmc Sierra Hd Denali 4x4 Jvc Head Unit
While Travis rests his weary bottom on the factory air-conditioned leather seats, he is surrounded by even more orange paint. Vices Collision matched the crazy orange by covering any panels that used to be GM faux wood trim. Over head is a suede-wrapped headliner to add a bit more luxury to the already decadent package. A JVC head unit controls the tunes through a full JL sound system encased within the doors and finalizing in bass belting from the dual 12-inch W7 subwoofers located under the rear seat. Having seen the custom GMC Sierra Denali HD for the first time at SEMA 2012, we immediately knew we had to show it off to our readers. It embodies all that we love—a killer custom truck that was heavily modified and actually gets used for off-road entertainment. The fact that it's a Denali HD is just icing on the cake.
View Photo Gallery | 13 Photos
Photo 4/13   |   2011 Gmc Sierra Hd Denali 4x4 Jl Audio Speakers

"It embodies all that we love—a killer custom truck that was heavily modified and actually gets used for off-road entertainment."