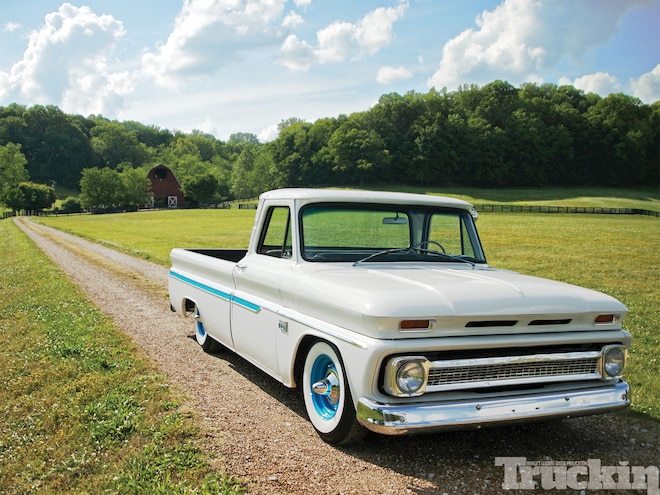 lip on your TV, and you'll quickly realize that fame and fortune can do strange things to otherwise normal people. In some cases, the limelight corrupts, but in other cases, it provides an opportunity to live out lifelong dreams. Country musician and Nashville resident James Otto falls into the latter category—he's just a regular down-to-earth guy that has found success in his musical career. After topping the Billboard country music charts in 2008 with his album Sunset Man and the single "Just Got Started Lovin' You," he decided to put some of his newfound earnings toward restoring the 1966 Chevy pickup his grandpa gave him. Having owned classic cars much of his life, he wanted a truck that would not only honor his grandpa Pete, but look good cruising the Nashville streets. With this in mind, the build began.
First on the chopping block was the suspension, so James turned to his friend Jason "Fat Girl" Turner in Lebanon, Tennessee. There, McGaughy's drop spindles and springs lowered the frontend 5 1/2 inches, while springs and a C-notch brought down the rear by 7 inches. New disc brakes were swapped in front and rear, then a set of Wheel Vintiques Smoothie wheels and Coker wide whitewall tires was bolted up to complete the modernized stance. The truck had already been given a fresh coat of white paint by James' grandpa, so James took the truck to Rossten Auto in Grand Forks, North Dakota, where new accents were added to the body, wheels, and tailgate in DuPont Hot Hues Baby Blue. The mirrors and antenna were also shaved for a clean look.
View Photo Gallery | 3 Photos
Photo 2/3   |   James loves to hop behind the wheel of his restored truck, whether it’s rowing through the gears on a back road or cruising the streets of Nashville.
Under the hood, James chose to keep the truck's existing 250ci inline-six, which he delivered to inline-six specialist Tom Lowe at Autowerks in Dysart, Iowa. There, the factory head was lump-ported for extra flow, and several bolt-ons were added, such as a FAST fuel injection system, Clifford intake, Clifford header, and Clifford cam. The modifications brought the motor up to a respectable 280 hp, and it was mated to a new Borg Warner T5 manual transmission at Transmission Masters in Smyrna, Tennessee. The revitalized motor is fed fuel by a Schlitz beer keg mounted in the truck's bed, adding some hot-rod flair.
Inside the truck's cab, James installed a full Kicker stereo system, including a PXi50.2 iPod controller, 6½-inch component speakers, 10-inch Solo Classic subwoofer, and two IX1000.5 amplifiers. And, for vintage appeal, the original in-dash AM radio was left intact and connected to the new system. Finally, new LMC Auto carpet was matched to the factory vinyl seats and laid down. All in all, James is pleased with the '66 Chevy's classic style and modern technology—we're sure his grandpa Pete would be pleased too. James wants to thank him for the truck, as well as his dad, his uncle Jimmy, and all the shops and sponsors for the help.
View Photo Gallery | 3 Photos
Photo 3/3   |   Sunset Chevy 1966 Chevrolet C10 Profile Photo
Inside the Build