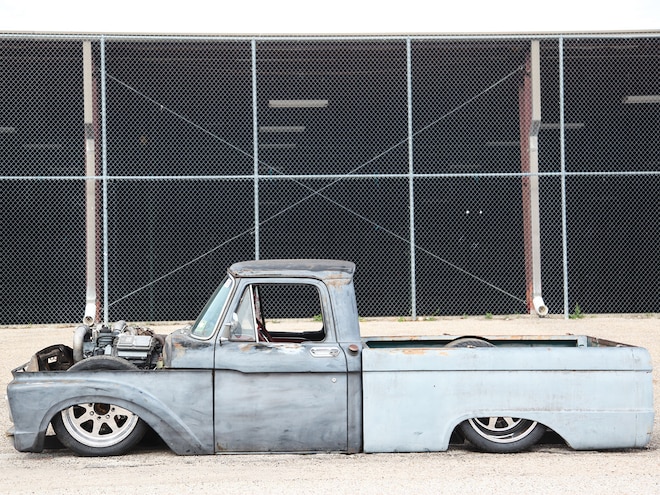 Serving our country in the Marine Corps, Dorian Reyna worked on an old '64 F-100 on the weekends and when time permitted. After putting in his time, Dorian returned home to Houston, however, the Ford pickup wasn't in the moving plans and remained in San Diego. Helping him wrench on his truck from time to time, another Marine provided constant encouragement to never give up. Once that friend lost his life, Dorian made the commitment to finish the truck and promptly make the trek out to SoCal to retrieve the project. Fast-forward a few years and you have the wildly modified F-100 in front of you. Here's how it got here.
As a diesel tech with Power Stroke Enginuities of Houston, Dorian knew he wanted to veer from the norm and slap a big turbo-diesel in between the framerails. After sourcing a 6.0L from an '05 Super Duty, the build began to take shape. Installing a diesel into the small frame of a classic F-100 is no easy feat, so he teamed up with Built to Drag customs, also of Houston. John Juarez and Rey Colunga crafted a custom boxed frame with sheetmetal upper and lower A-arms, 8-lug McGaughy's drop spindles, and Airlift airbags. Out back, a four-link handles the narrowed Chevy 8-lug 14-bolt rearend, which sends power to two giant Mickey Thompson Sportsman tires. Eight-lug American Force wheels cap off the chassis.
Power Stroke Enginuities then stepped in and created a 6.0L Power Stroke with a custom turbo setup by Matt Kubik of Cutting Edge Diesel, in Newark, Oklahoma. Once it's tuned by Matt Robinson of Gear Head Automotive, the diesel should push 650 hp and 1,200 lb-ft of torque to the pavement.
As for an interior, right now Dorian is content with riding on a bucket and singing to himself. He's not sure what he's going to do with the body, but with that much torque, we just hope the paint holds on tight. One thing we are certain of, his Marine buddy would be proud to see the Ford's progress. Semper Fi.
Thanks to an '05 Super Duty donor, Dorian's F-100 is now powered by a 6.0L turbodiesel.
INSIDE THE BUILD
Year Make Model: 1964 Ford F-100
Owner and City/State: Dorian Reyna • Houston, Texas
ENGINE
Type: 6.0L Power Stroke turbodiesel
Induction: Custom Borg-Warner turbo setup by Cutting Edge Diesel with 45 psi of boost
Exhaust: Custom 4-inch
Fuel System: 205cc injectors
Engine Management: Custom ECU tune by Gear Head Automotive
Output: 650 hp and 1,200 lb-ft
Built by: Power Stroke Enginuities • Houston, Texas
DRIVETRAIN
Transmission: 2007 TorqShift
Rearend: Chevy 8-lug narrowed with 3.73 gears
CHASSIS
Front suspension: McGaughy's Chevy HD drop spindles, Airlift 'bags, Full frame and custom A-arms by Built to Drag
Rear suspension: Four-link with Fox shocks and Airlift 'bags built by Built to Drag Customs
Brakes: Four-piston calipers and drilled/slotted rotors
WHEELS & TIRES
Wheels: 20x9 (front) and 20x14 (rear) American Force Recon SS8
Tires: 275/40R20 Nitto INVO (front) and 29x18R20LT Mickey Thompson Sportsman S/R (rear)