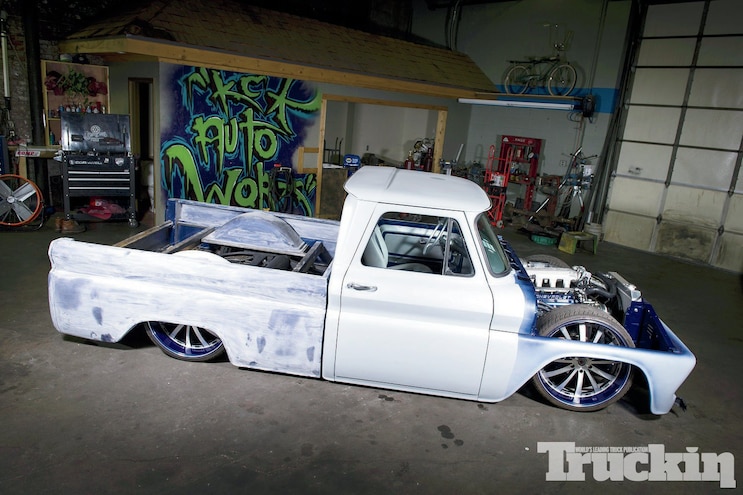 We’ve always been confused by the artificial separations and labels some truck owners impose upon themselves. They say you’re either a Ford guy or a Chevy guy, a lifted truck guy or a lowered truck guy, a new-school guy or an old-school guy. Rather than choosing one side or the other, why not choose both? This is the thought process that drove 29-year-old Marine Aaron Stark of Kansas City, Kansas, to build the C10 you see before you. In Aaron’s words, it is “new old school” -- a fusion of modern engine and suspension tech with the timeless lines and clean styling of days past.
The build of this ’64 C10 began at KC Autoworx in Kansas City, Missouri. There, the body was stripped off the frame in preparation for a full air suspension upgrade. First, a fabricated Z was welded into the rear frame, and a Porterbuilt dropped front crossmember was installed up front. The truck also features Porterbuilt tubular control arms, Slam Specialties ’bags, and KYB shocks. More SS bags were fit to the rear trailing arms, an air tank, ½-inch hard lines, and valves were added between the framerails, and a fuel cell was installed out back. Sectioned fenders help tuck the 24-inch Red Sport wheels, and the truck can now lay frame with ease thanks to the new air suspension. 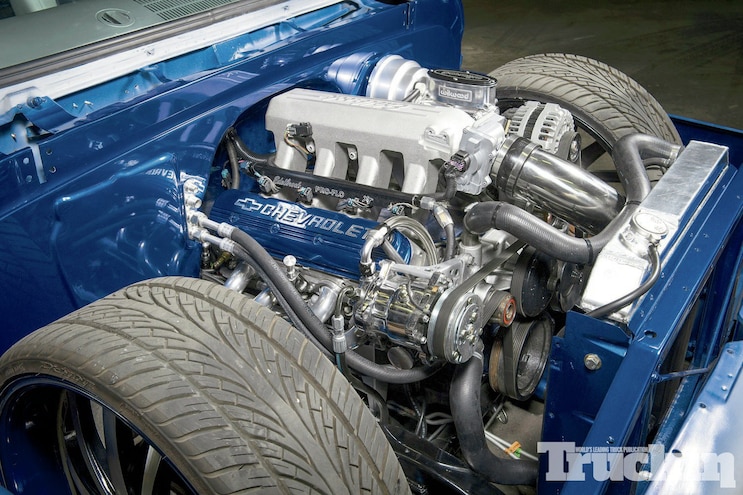 View Photo Gallery | 2 Photos
Photo 2/2   |   This Chevy’s engine bay is an immediate attention-getter, thanks to a modified LS1 and plenty of vibrant Sonic Blue paint.
Bringing another modern touch to this classic Chevy is a modified LS1. KC Autoworx upgraded the engine with a Comp Cams cam, long-tube headers, and an Edelbrock EFI system, among other tweaks. The LS1 was bolted to a new 4L60E automatic transmission, and hooked up to a shortened driveshaft. Aaron tells us the setup is good for more than 400 hp, plenty to spin the oversized wheels and tires.

From a paint and body standpoint, it’s clear the truck is still a work in progress, but we’d say it’s definitely on the right track. In addition to the sectioned fenders mentioned earlier, the firewall has been shaved and a roll pan was added at the rear. HID headlights and LED taillights make other motorists aware of the truck’s presence at night. Aaron and his friend Justin Irwin laid down DuPont Sonic Blue paint on some of the exterior details, such as the valve covers, wheel lips, and engine bay. The inner door panels, dash, and steering wheel were also sprayed in Sonic Blue and Galaxy Silver.
Rather than choosing to be either an old-school truck guy or a new-school truck guy, Aaron chose to blend the two design philosophies into a single truck. As a result, his C10 is well on its way to becoming a killer custom that anyone can appreciate. Aaron would like to thank Pat Cox at KC Autoworx, his friend Justin Irwin, his wife Angelica, and all his friends and family for the help and motivation.
Inside the Build
Year Make Model:
1964 Chevrolet C10
Owner and City/State:
Aaron Stark • Kansas City, Kansas