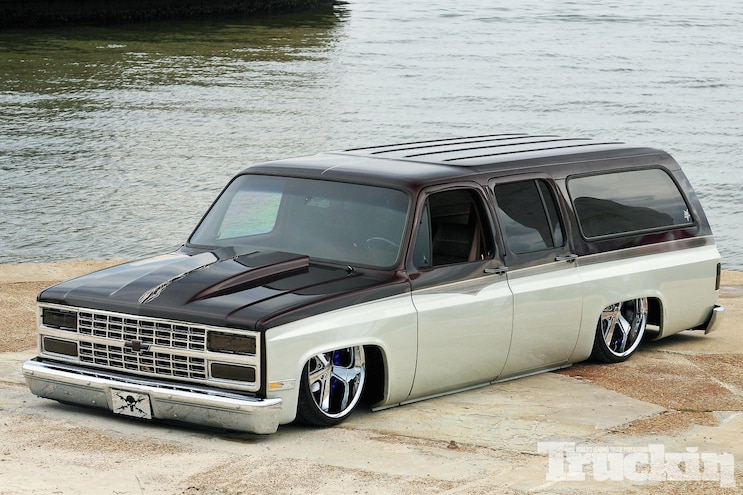 Some custom truck builds start out with factory-fresh vehicles that have been passed down through generations. Other builds, like Darrell Redding’s 1990 Suburban, have a less glamorous heritage. After working on several muscle cars, imports, and a 4WD Suburban, Darrell was ready for a slammed truck build. One day on his way home from work, he spotted this 2WD square-body Suburban sitting in a field with windows smashed and tires slashed. He knew it was just right for what he had in mind, so after picking it up for a mere $500, he got down to business.
The build began in the garage of Darrell’s friend, Derek Bauer. There, the two Z’d the front and rear of the truck’s frame, raising the suspension components three and four inches respectively. Additional clearance in the rear came by way of a C-notch, and the front control arms were narrowed to provide room for wider wheels. DJM spindles and Dominator II ’bags completed the suspension, and a set of 22x11 KMC wheels and Kumho tires now tuck under all four fenders. Even with all of these mods, Darrell still wanted a lower stance, so he opted to complete the process with a body drop.
Now that the ’Burban was laying rocker at the press of a button, a new exterior look was in order. At Holland’s Paint and Body, in Robertsdale, Alabama, the big Chevy was sprayed in a two-tone of rootbeer metallic and silver hues. A subtle charcoal stripe accentuates the truck’s midsection, and a skull pattern was airbrushed onto this graphic by Joey Millfelt of Spanish Fort, Alabama. Darin Allen of Killer Designs by Darin, also brushed pinstripes onto the truck’s cowl hood, roof, tailgate, and interior panels.

"With its clean paint scheme, deep-dish wheels, and slammed stance, it’s hard to believe that Darrell picked this truck up for only $500."

The inside of this ’bagged family hauler has been completely reworked, starting with new brown carpet and cinnamon leather from Mr. Stitches in Mary Ester, Florida. The doors, kick panels, dash, Billet Specialties wheel, and all three rows of seats received leather treatment. A custom fiberglass center console was painted to match the truck’s theme, as were fiberglass speaker pods in the doors. Audio playback is handled by a Pioneer touchscreen head unit, five Kicker amps, six 6½-inch Kicker speakers, and two 12-inch Kicker subwoofers in a custom fiberglass box. 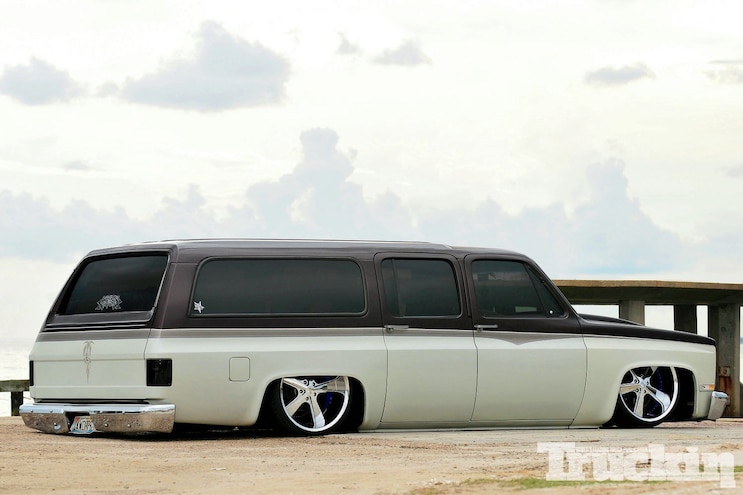