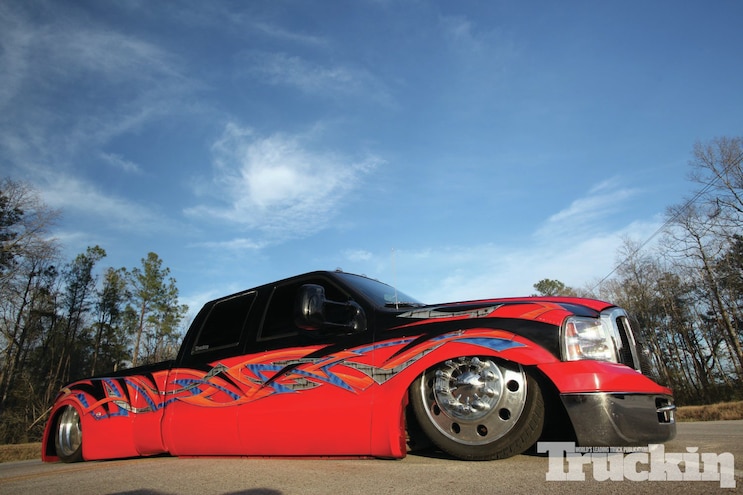 Dualies are built to work hard day in and day out. Nothing glamorous here, just towing and hauling, then repeat. After a long, hard life, Clint Diesburg, of Texas City, Texas, decided his ’99 F-350 dualie had paid its dues and it was time to give the workhorse a makeover. With more than 337,000 miles on the odometer, the dualie went under the knife. Once it was revived, the big Blue Oval was glistening black and red with multicolored graphics adorning the body and the wheels were stuffed under the fenders. Not one for pampering a custom truck, Clint quickly snatched up the keys, fired the Power Stroke to life, and began to drag the framerails all over Texas.
It takes an incredible amount of work to make a 1-ton work truck lay out and drag. The team responsible for the suspension and body drop is John Juarez and Rey Colunga at Built to Drag Customs (B2D) in Houston. B2D ditched the I-beam setup in favor of a Chevy 8-lug front suspension with Slam ’bags, McGaughys drop spindles, and Uniball ball joints. Out back, an extra-large four-link keeps tabs on the narrowed rearend and matching Slam ’bags. A trick cantilever shock setup incorporates Fox off-road shocks for a unique look and smooth ride. B2D also built the sheetmetal panels for inside the bed, which was later covered in bedliner. Once the air is let out of the ’bags, the fenders swallow up 24-inch Alcoa wheels with ease.
Not to be outdone by the slammed suspension, the Ford’s body screams for attention with a retina-burning paint scheme expertly applied by Patrick Reid at Mad Concepts in San Leon, Texas. Once Robbie Sandino had laid down the black and red two-tone paintjob, Patrick stepped in and added wild graphics in blue, yellow, purple, silver, and orange. Drop shadows and pinstriping add even more depth to the expansive graphics. The ’99 F-350 also benefits from a full front end conversion with newer ’05 F-350 bumper, lights, and grille with billet inserts. Cadillac Deville taillights were welded in place of the factory Ford items and an ’04 F-350 rear bumper installed.
View Photo Gallery | 7 Photos
Photo 5/7   |   The console continues on to the rear bucket seats where occupants are blasted by three Rockford 12-inch subs.
Inside, Patrick Reid brought the graphics onto the doorjambs, door panels, and large fiberglass console that he made using MDF. That console is home to three Rockford Fosgate 12-inch subs and two Rockford amps, and splits the red and black bucket seats wrapped by Angels Upholstery in Pasadena, Texas. A billet steering wheel, white-faced gauges, and Viair air pressure gauges in the A-pillar pod round out the interior upgrades.
We shot Clint’s dualie for a Busted Knuckles feature in 2011 (Issue 11 of 2011), and when we asked Clint why he built the dualie, his response was simple, “I’ve always wanted one.” That’s the perfect reason to hop in it and drag the bumpers off. 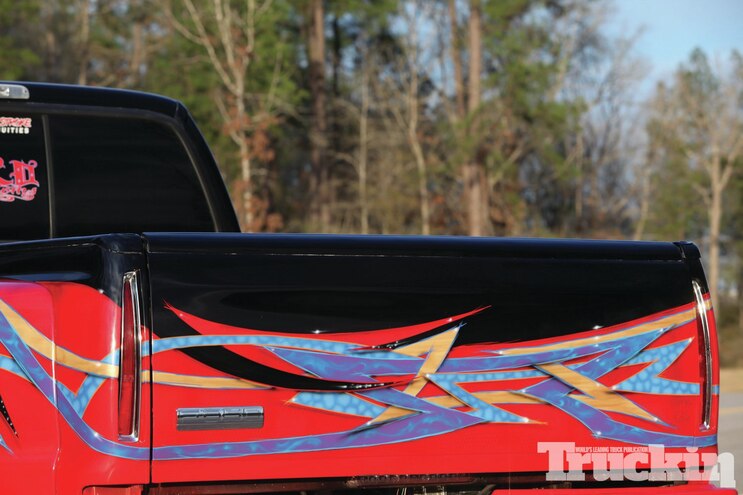 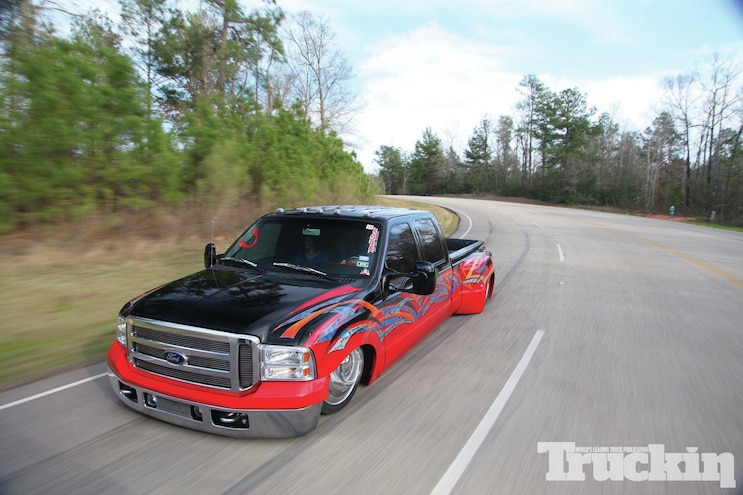