Pairing Up The Odds 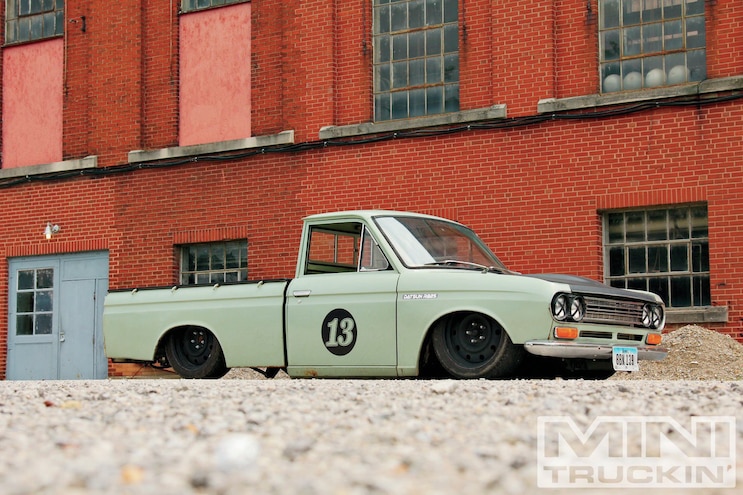 Datsuns are the original minitruck. First built in 1955, they appeared in the States come 1959 and were one of the few true tiny trucks on the market until Toyota came on the scene with the Stout in 1964. And even though there are lots of examples of the venerable Datsun 520 out there, the 1969 520 is one of the more desirable models because it came with the powerful J15 engine that pushed out 77 hp. Go, baby, go!
Josh Barnes may not be one of the original minitruckers, but he has been in the scene for close to a decade now. After building a few cool minis including an S-10 crew-cab dually, he came across a 1969 Datsun 520 in need of some love. Now that could’ve been the start of an interesting build, but things got even deeper shortly thereafter. 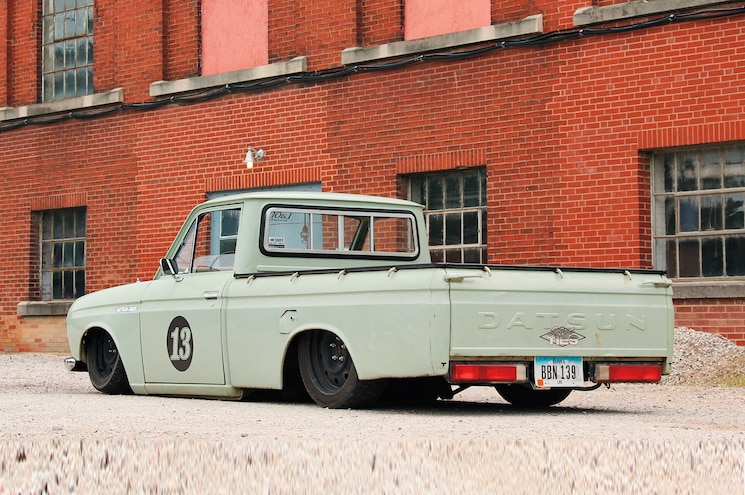 View Photo Gallery | 10 Photos
Photo 2/10   |   1969 Datsun 520 Back Three Quarter
That’s when Josh found himself in possession of a RB25DET. In case you didn’t know, that’s the engine found in a Nissan Skyline, and it’s a twin-cam turbo that pushes around 250 ponies to the pavement. All of a sudden, Josh had an idea. What if he put that mammoth motor into the Datsun truck? That’d be pretty cool -- assuming it worked. (Spoiler alert: it worked. But it wasn’t easy, and it took a lot of extra hours at the shop to make it happen. Von Chounlamany of Laodies Kustomz was a key player in making the transplant a success.)
There’s a short list on how to combine these two components to make it all work, and it starts with the frame. Von and the crew at Laodies built a new chassis from the ground up, pairing the Nissan motor with a Chevy 10-bolt axle, Eaton gears, and a GReddy intercooler. In the process, they converted the truck to a five-lug pattern by inserting the front clip from a late-model Toyota truck. At the end of it all, they had to do a lot of cutting, welding and praying to make that Datsun pickup body fit over the mammoth motor -- and even then they weren’t 100-percent that it would work, but the results speak for themselves.
Then it was on to the paint and body. Or not, whatever. Josh built this truck as a cool little ride with a factory paintjob and some Dodge Charger stockers for rollers. It’s got a little surface rust, the hood is black and bubbled to fit the motor, but whatever, that’s what Josh wanted. Is it some concourse-worthy ride that you could eat off of the firewall? We wouldn’t suggest that unless you’re up on your tetanus shots, but the truck is super clean and we’d love to have it in our own garage. 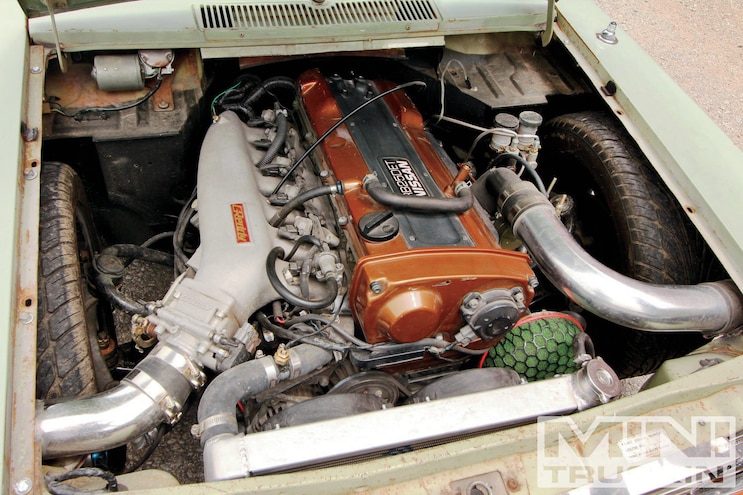 View Photo Gallery | 10 Photos
Photo 6/10   |   1969 Datsun 520 Engine
What’s next for the 520? Whether it’s paint, bodywork, a crazier interior or something like that, nothing matters -- this truck is bad as hell just as it sits, and that’s the point. We toast Josh and his amazing accomplishment. Here’s to big motors and little trucks, long may they both rule the road.
Special Thanks From Owner “Thanks to my wife for letting me build what I want and not caring about it, very special thanks to Von and Adam from Laodies Kustomz, thanks to my Severed Ties family and all you Wrong Team friends -- you know who you are!”