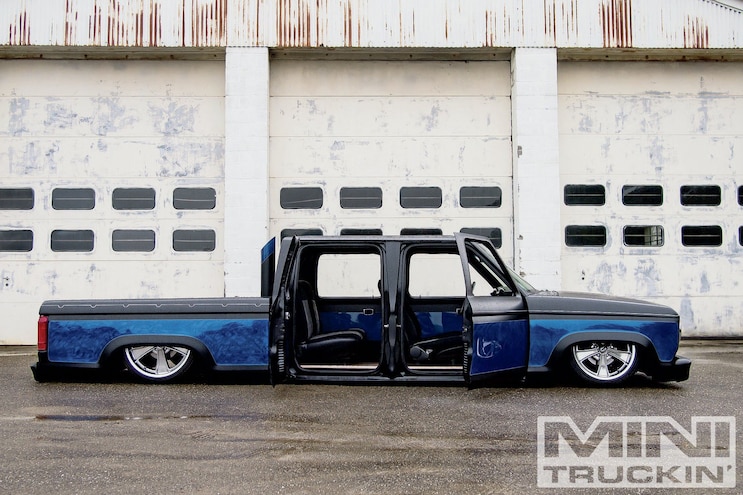 “What the hell?!” are usually the words you’ll hear escape the mouths of onlookers swarming around this 1985 Ford Ranger pickup at any given show. It really is something to see -- candy paint over bare metal, double cab construction, and that exhaust stack fed by a Cummins diesel engine proudly protruding through the bed floor. And that’s just at first glance. From a distance.
The truck’s builder, B.J. Boden had grand plans for this build from the start, and if you’ve followed its progress, you’ll know it has come a long way in a very short amount of time. B.J. had very special reasons that fueled sleepless nights and got him through days that seemed to bleed into the next. “This truck was supposed to be a father/son project, but my dad passed away shortly after we talked about building it. I’ve been steadily working on it as a tribute to him.” With his father’s spiritual support deep within him, B.J. set out to create a Ranger unlike any other. 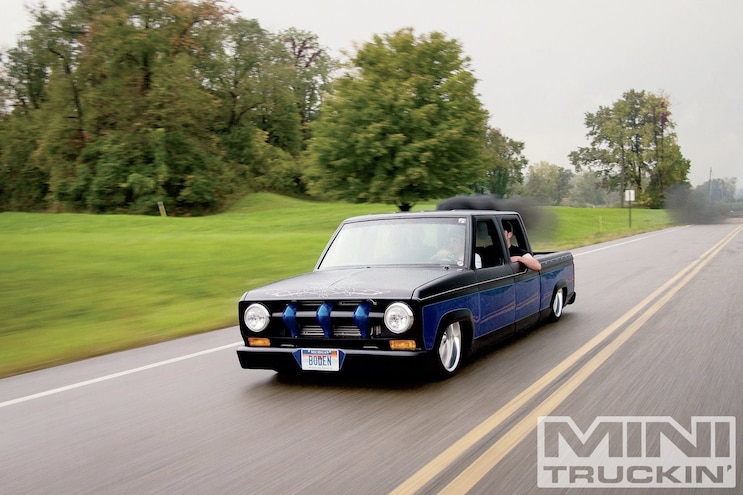 View Photo Gallery | 7 Photos
Photo 2/7   |   1985 Ford Ranger In Motion Front Three Quarter
“When I first started, I had a general plan on how to build the cab. I didn’t want to waste a ton of money on two trucks if things didn’t go as planned, so I took home the best two cabs I could find in the junkyard. If I could go back in time, I would’ve spent extra money on nicer specimens though.” Luckily everything went according to plan, and before he knew it, B.J. reached the point of no return. “Once I got the cab put together, a solid rolling chassis was next, and then everything was taken apart for countless hours of bodywork and paint. With enough planning and determination, the things that seemed impossible at times, were actually becoming a reality.”
But with a job of this nature, the scrap pile multiplied in size nearly every day. “There were so many trucks coming to the house getting cut up and leaving in pieces, my neighbors started to think I was running a chop shop out of my garage. During the build, I tried to salvage as many parts from trucks my dad had and other things he left behind to physically bring him into the build since he was my true motivation.”
Just last summer, B.J.’s truck appeared as a Construction Zone feature here, and in just under a year’s time, it’s back and as bad as can be. When B.J. called to notify the MT office of its completion, photographic evidence was requested to make sure he wasn’t crying wolf. He was quick to supply proof, which immediately squashed any doubts and disbelief. Seeing it in its relaxed state is one thing, but watching it fire up and pollute the air with black smoke is something else. Surely, pops would be proud.
Special Thanks From Owner
“Thanks to all my friend and family that have given their support, time, sweat, and blood to make this what it is today, I couldn’t have done it without them. Thanks to Temperance Body Shop, Mark’s Industrial, Hanson Graphix, and Lucas Auto Parts for all the work and tools they loaned me to break, and I must mention the “lucky” ones who were there the most: Jason Dwornik, James Heilman, Arron Russeau, Kevin Trapp, Jordan Fritz, Tyler Gorden, Brian Tibai, Mike Kluczynski, Ryan “Supervisor” Walsh, and my dad -- REST IN PEACE. This one’s for you.”