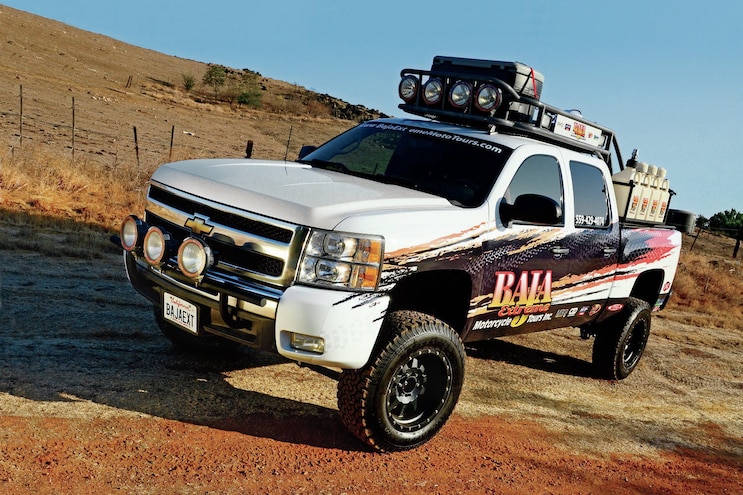 Heading down Mexico way on the Baja peninsula is the stuff of legend -- it’s featured in songs, books, movies, and magazines. Who hasn’t dreamed of bombing over rugged desert terrain dotted with boulders and cactus at breakneck speeds? No wonder the Baja 1000 is one of the world’s best-known off-races.
It’s no surprise, either, that dirt bike excursions are a popular pursuit. Just ask Greg Bardonnex of Baja Extreme Motorcycle Tours. When not managing his successful plumbing business in Central California, he likes to head south of the border in his ’09 Chevy LT 1/2-ton chase truck with a load full of dirt bikes in the bed and various support equipment -- all so his excursion outfit can enable enthusiasts to get a gritty, real-world taste of Baja dust and sand.
Of course, loyal 8-Lug HD Truck magazine readers will question why we have a ½-ton truck on these pages, but we are obliged to point out that this issue is a Work Truck Review edition, and therefore anything goes as long as it’s used for work. 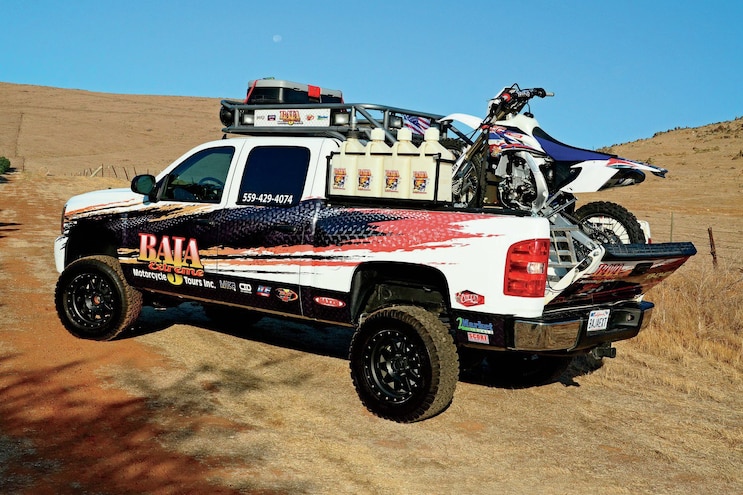 View Photo Gallery | 8 Photos
Photo 2/8   |   Spare gas, lots of tools, and even a replacement bike are all tucked neatly into the Chevy.
Before we dig into the details of his off-road rig -- which required a special setup on the suspension and racks -- we should share how Bardonnex was bitten by the Baja bug…and how it helped him to modify his Chevy for desert duty.
“From a very early age, I learned about the beautiful beaches, great food, never-ending fun, welcoming faces, and extreme terrain of Baja California,” Bardonnex relates. “When I was a child, my grandparents had a house in Puertecitos, which is located about 50 miles south of San Felipe, Baja California, that we would visit a couple of times a year.”
Sounds kinda romantic, but it wasn’t as simple as chips, salsa, and beer. “Though the trip was long from Bishop, California, to San Felipe, nothing compared to that last 50 miles of Baja terrain,” he admits. “Packed in my dad’s ’70s-era K5 Blazer, we would tackle the terrain of the early Baja before the groomed dirt or paved roads existed. It made this seemingly short mileage take more than four hours alone.” Hey, if it were easy, everybody would be down there, right?
From experiencing these trips and watching Baja races as a kid, Bardonnex’s love for Baja grew to an addiction. Once this infection settled into his blood, he knew he had to race in Baja. Yet the terrain is so grueling that each and every race many sign up with only the hopes to finish within the time limit. After racing motorcycles, Bardonnex then moved into racing with a good buddy in the MWR #55 trophy truck, piloted by Mark Workentine. 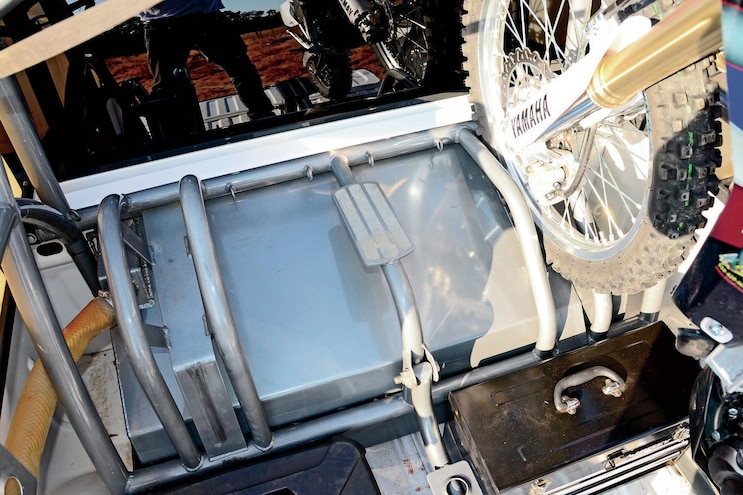 View Photo Gallery | 8 Photos
Photo 3/8   |   Fabrications Unlimited built bike racks that fit cleverly over the 50-gallon tank.
While serving as Workentine’s co-pilot/co-driver was one for the bucket list, Bardonnex always had a dream of sharing the beauty and mysteries of Baja with friends. And there is nothing more personal than experiencing Baja on a motorcycle.
“So my father, brother, and I decided to stop talking about it and make it happen,” he recalls. “Let’s take groups of friends to Baja on bikes.”
Easier said than done, of course. The family floated different ideas around about backpacks and where to get fuel, and if someone breaks or wrecks, what to do. After considering all the worst-case scenarios, they knew they had to build a chase truck that has it all -- and then some.
They started by bolting on a 7-inch Rough Country lift kit to rise above a set of 285/65R18 BFG All-Terrain tires mounted on 18-inch Method wheels (the same brand used on the MWR trophy truck). This lift and tire size gave the truck plenty of room for the chassis to articulate in the rough without rubbing.
Fabrications Unlimited built a bed rack to hold two spare bikes and eight 5-gallon jugs on the sides, along with a 50-gallon tank located at the front of the bed, under the rack. For lighting, they went with seven 8-inch HID lights and six LED work lights that can illuminate the dark desert like high noon. CrabFab fabricated the front pushbar that holds three of the HID lights. All these upgrades were a good start, but something unexpected occurred. 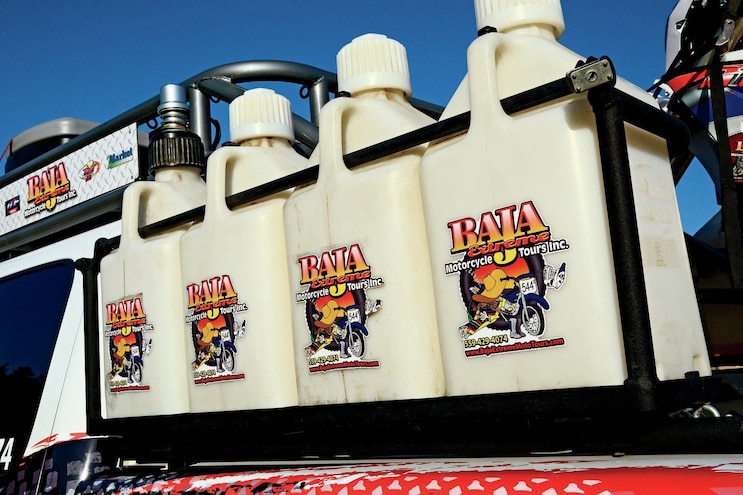 View Photo Gallery | 8 Photos
Photo 4/8   |   You can never be sure where you will find petrol in Baja, so carrying your own is a safe bet.
“After loading the truck, we soon realized how quickly the weight adds up,” Bardonnex notes. With an estimated load weight of 1,800 pounds added to the top of the truck, things got a little tippy—not what you want when scrambling over rocky trails and open wilderness.
To settle down the body roll, the next step was to contact Hellwig for helper springs and a sway bar system. And Melanie White of Hellwig already had Bardonnex’s truck on her radar screen.
“I kept seeing Greg’s truck running around town, and I called him to talk about what he did,” White explains. “When I met and talked to him, we discussed the need for Hellwig support.”
With all the weight Bardonnex’s pickup carries -- especially since it’s so high up -- it needed better stability for the top-heavy weight. “We just did a front bar and helpers (P/N 7685), and a two-leaf helper spring in the rear (P/N 1907),” White adds. “We didn’t do a rear sway bar because he needed off-road articulation capability.” Why not airbags (which are also available from Hellwig)? Again, the Baja desert dictated a different approach.
“We know he gets into some rough off-road conditions, so we didn’t want to give him air as a load support,” White explains. “He needed something much more off-road friendly, like the helper springs. Steel load support is the way to go in rugged conditions.”
Being prepared for breakdowns in Baja is just common sense. “It’s very easy to get lost in Baja, so we equipped the truck with a Lowrance GPS system and Icom radios,” Bardonnex adds. With all this preparedness in place, the truck has grown from family-and-friend rides into one of the main rigs for Baja Extreme Motorcycle Tours, and it is put to the test often. Typical excursions are in northern Baja, lasting four days, with all-inclusive accommodations.
As the main support vehicle for the company, the truck carries two support crew, first-aid gear (including a backboard and all braces), food and fluids for the riders, fuel for all the bikes, spare parts, and bikes. “Anytime a rider goes down and can’t push on with the group, Chevy Chase 1 can get to them for retrieval.” And that’s what it takes to beat the Baja. 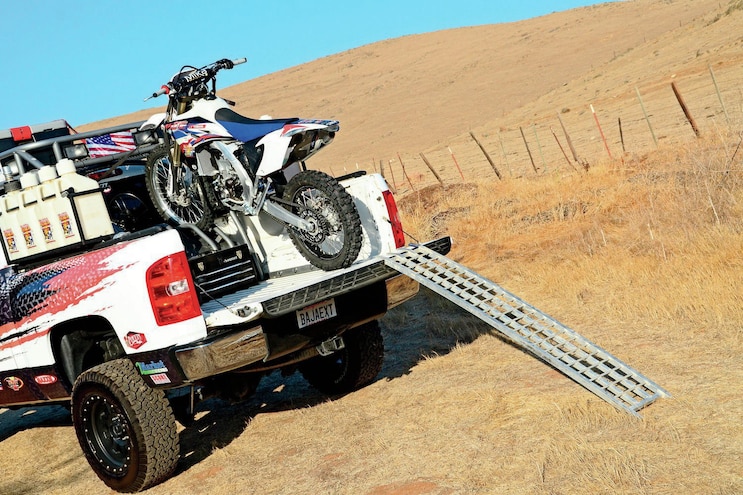