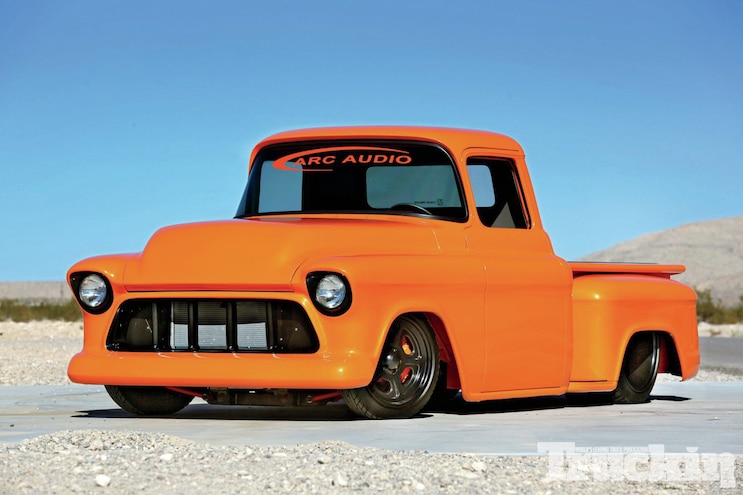 Bright orange and black are colors commonly associated with Halloween. During that day in October, it seems to be the norm to add as much decoration as you can to your house and over-accessorize it to the point of being nearly unrecognizable. Unfortunately, many custom truck owners fall victim to a similar “more is better” philosophy when it comes time to paint their trucks. Graphics, skulls, flames, and custom airbrushing are all well and good when done right, but bodyman and paint shop manager, Carlos Martins of Ceres, California, went the opposite direction and used only two colors to prove less can be more.
The love for our hobby and the belief that simplicity can be beautiful are two of the big reasons why Carlos and his wife, Susan, purchased the 1956 Chevy pickup for $800 back in 2009. That measly sum of money is a tiny fraction of the blood, sweat, and cash Carlos has poured into the classic truck over the last five years. It all began at Cal-Hot Coatings and Fab, in Turlock, California, where Alex Santiago built a new frame from 2x6-inch steel, which uses Mustang II control arms and spindles with QA1 coilovers. Out back, a Comp Engineering four-link and wishbone centers the Ford 9-inch axle and uses matching QA1 coilovers to lower the truck. Powdercoating and Jet-Hot coating are Cal-Hot Coatings’ specialty, so we weren’t surprised to hear Alex went ahead and coated the entire frame, suspension, and even the axle for good looks and lasting protection. Keeping the look totally hot rod, Carlos added 18- and 20-inch Mickey Thompson HR-2 wheels, but not before Alex coated them in satin black for a sinister look. With plans for a healthy big-block to power the Bow Tie, 18-inch-wide Mickey Thompson S/R radials were mounted to the M/T wheels and provide instant muscle-truck credibility. 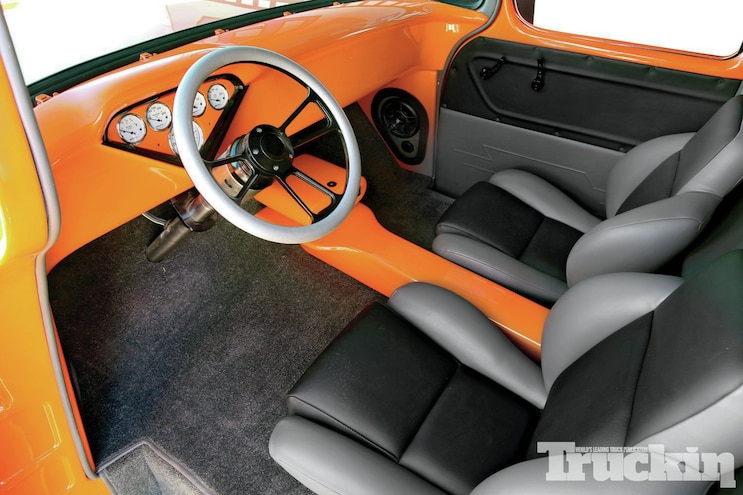 "Guys joke around about getting divorced over these projects, but my wife was my greatest supporter. --Carlos Martins"

Speaking of big-block Chevy engines, Quality Engines, in Modesto, California, assembled the 454 ci using parts that are sure to make the ’56 a stoplight terror. Stock heads were ported and polished to match an Edelbrock Air-Gap intake manifold, which receives its fuel mixture from a Demon 850-cfm double-pumper carb. A Comp bumpstick provides the requisite big-block rumble, and Sanderson headers with a Jet-Hot–coated exhaust ensures everyone hears Carlos coming down the highway. A black powdercoated Shotgun Bill scoop adds racecar good looks, as do the orange powdercoated valve covers and polished BeCool radiator. Black 12-point ARP bolts bring the orange and black theme into the engine bay. Sheetmetal inner fenders and a shaved firewall serve as the backdrop to Eddie Motorsports billet hood hinges.
As a bodyman and paint shop manager, Carlos is no stranger to welding and Bondo, so you can imagine just how many man-hours were involved in smoothing and fabricating the entire one-piece front end (fenders and grille), sectioned and shortened front bumper, the sheetmetal hood, recessed and angled tailgate, and completely smoothed body (no more door handles, wipers, rain gutters, emblems, bed stake pockets, and bed floor). The bodywork is impeccable, which is why Carlos was adamant about the body color. It had to 100 percent match the Prismatic New Tucker Orange suspension and accent pieces found throughout. Prismatic paint was the only source for the New Tucker Orange paint, and Cars Etc., in Turlock, California, handled spraying the pigment. Simple black accents help the orange pop even more and include the open grille and headlight buckets. With the truck nearly complete, it was time to address the interior, and much like the rest of the build, restraint was used inside as well. 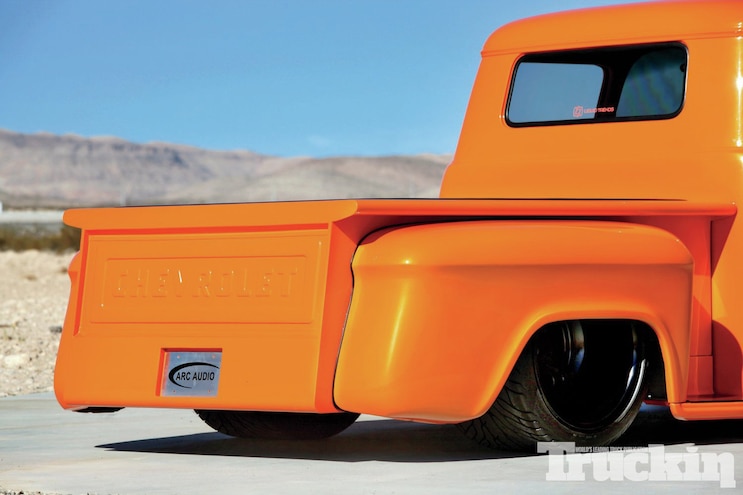 View Photo Gallery | 8 Photos
Photo 3/8   |   1956 Chevrolet Stepside Tail View
After smoothing the dash and installing Autometer classic gauges, Carlos delivered the Chevy to Mendoza’s Unlimited Upholstery, in Turlock, where Honda Prelude seats were wrapped in black and grey vinyl and dark grey carpet was installed. The next stop was to Liquid Trends, in Modesto, California, where Brian Mitchell and his team created a booming audio system. Two 8-inch Arc Audio subs are mounted behind the passenger seat in a custom enclosure, which also houses an Arc Audio amp on the driver side. Brian also built a center console and kick panels for the Arc Audio XEQ and Arc Audio components.
Carlos’ Chevy is the epitome of clean and simple. We preach all the time the importance of a nailed stance, wheel and tire combo, and killer color -- well, it’s clear Carlos has perfected those big mods. He was quick to thank his wife, Susan, for all of her help and trips to the ER (it’s a long but funny story), his bodywork partner in crime Shawn Avalos, Alex Santiago, James Mosad, and Brian Mitchell. 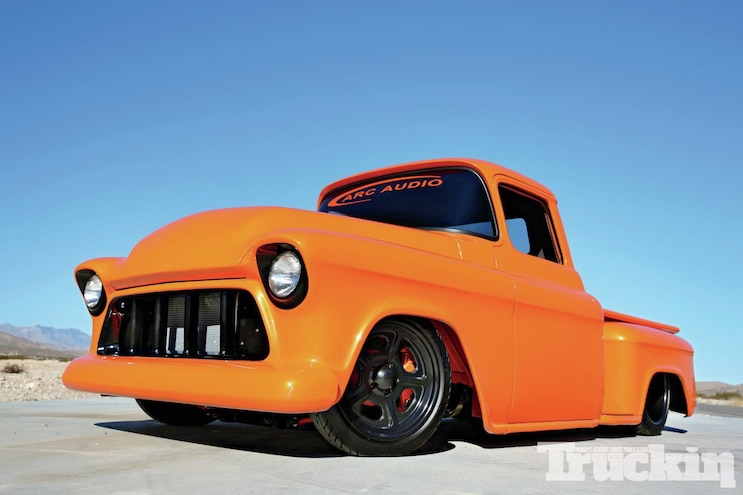 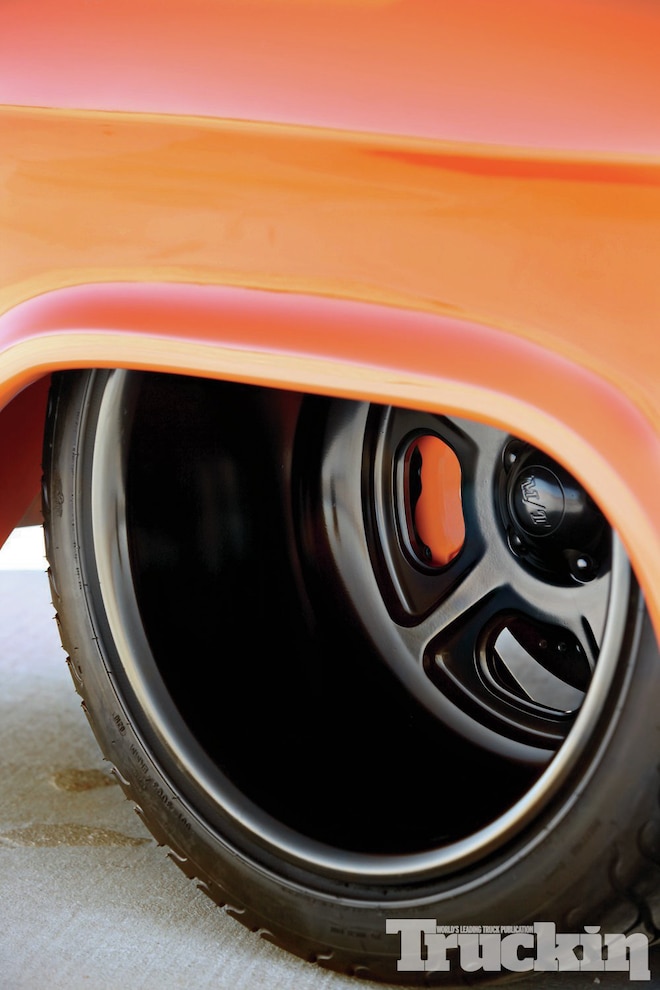