A Slammed Chevy with an Oldsmobile Big-Block at Heart 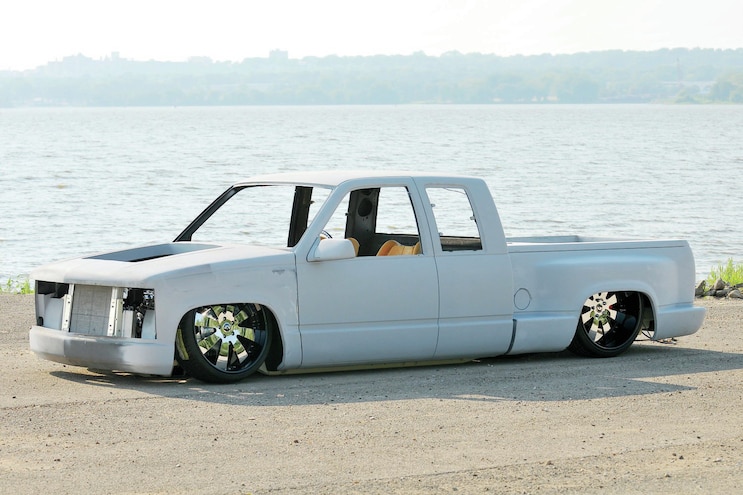 When it comes to swapping a new engine into a Chevy truck, a standard formula has developed over the years. Need something tried and true? A 350ci small-block is the answer. Want something more modern? Pick up an LS V-8. However, a select few choose to think outside the box and get more creative with their engine choices. Chad Moline, of Rock Falls, Illinois, elected to use a 455ci Oldsmobile big-block for his 1994 Chevrolet Silverado project, and the rest of his build proved to be equally creative.
Chad began the Chevy truck project with his friend Josh at their shop, Krupted Rides, in Rock Falls. First, the frame was removed from the truck and boxed with plate steel for strength. It was then C-notched and painted an off-white blend Chad calls Kustard. The front suspension consists of relocated Michigan Metal Works control arms and DJM 2-inch drop spindles, while the rear features a modified KP Components six-link setup. Slam Specialties ’bags and Monroe shocks can be found on all four corners. Wilwood Big Brakes were installed on the new spindles and narrowed rear axle, and a set of staggered 24-inch Forgiato wheels were fit along with Carbon Series tires. 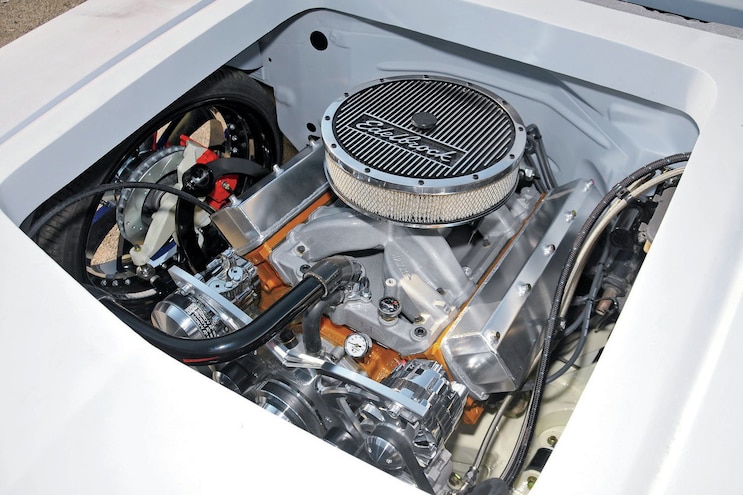 View Photo Gallery | 6 Photos
Photo 2/6   |   1994 Chevrolet Silverado Engine
Satisfied with the stance, Chad and Josh turned their focus to the powertrain. As mentioned earlier, the Chevy is powered by a freshly rebuilt 455ci Olds big-block, which was mated to a built GM TH-350 transmission. The obligatory rumble was added to the motor by way of a Comp Cams cam, custom shorty headers, and a 3-inch exhaust with Flowmaster mufflers. The engine bay is also dressed up by fabricated valve covers, a March Performance billet pulley system, and a relocated battery, among other mods. To top it off, Chad cut an opening in the Chevy’s hood that would allow show-goers to observe the truck’s creative heart transplant.
With the truck running and driveable, Chad began working on the body. The panels have been shaved and welded, from the hood and front bumper all the way to the Sport Side bed’s lights and roll pan. A 15-gallon gas tank was placed in the bed to the rear of the cab, and panels were fabricated to cover it, along with new sheetmetal for the bed floor. The truck’s interior remains mostly gutted, but Chad did drop in a set of bare foam Oldsmobile seats and fabricated a metal dash from a Grant Kustoms roll pan combo. A Forgiato custom-cut steering wheel is also present to tie in with the Chevy’s wheels.
Chad still has a ways to go to get his truck looking like the rendering, but we’re excited to see the completed build. It always pays to think outside the box and reject the status quo, and the amount of attention this incomplete project gets is a testament to that fact. Chad wanted to thank his friend Josh and Team Krupted Rides for helping him make it this far. 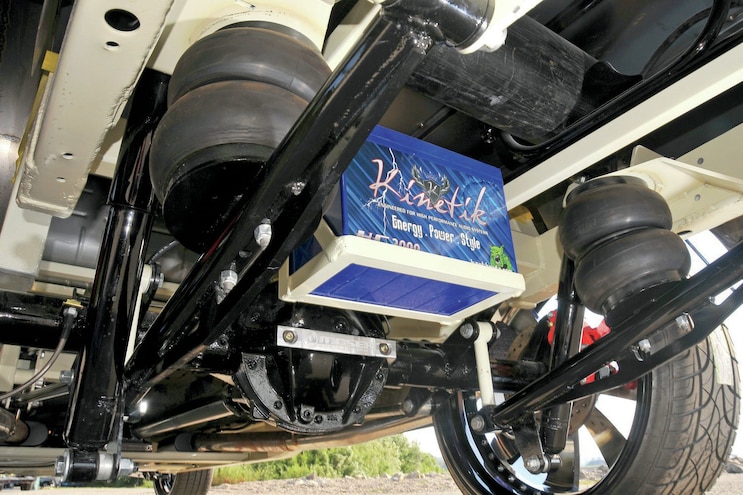 View Photo Gallery | 6 Photos
Photo 3/6   |   Looking underneath the Chevy’s bed reveals a KP Components six-link, relocated Kinetik battery, and narrowed rear axle. Showing attention to detail, everything has been painted in a two-tone scheme of Kustard and black.
Artist Marcus Talamantez created this rendering, which shows what the truck will look like painted in PPG Vibrance Aquamarine. It’s clean, simple, and smooth -- and we’re sure it’ll be a real attention-getter at shows.