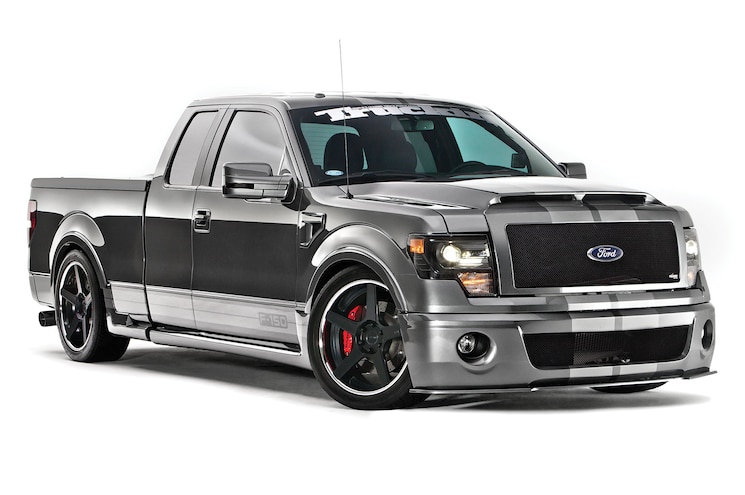 Take a second to think of your favorite Ford performance icons of all time. Cars such as the GT-40, Shelby Cobra, Boss Mustang, and the GT-500 should all be on your list. One of our favorite Ford performance machines is the most recent iteration of the GT. With world-class performance, the specs alone were impressive on this supercar, but sitting in the driver seat and firing up the supercharged DOHC V-8 is surreal. We aspired to meld the race-inspired looks of the GT with Ford’s bold truck styling using our in-house 2013 Ford F-150 FX2 as the starting point. Our criteria was complex, as we wanted a factory-modified-looking pickup, but we still wanted it to be functional as a truck. Oh, and we also wanted it to be fast, handle like a muscle car, and have all the creature comforts of a modern-day Ford F-150. Ladies and gentlemen, we proudly present our Project GT-150. 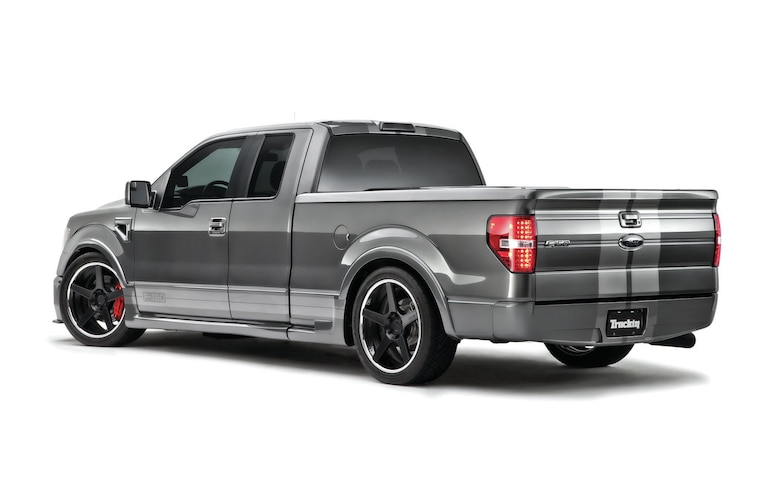 View Photo Gallery | 11 Photos
Photo 2/11   |   2013 Ford F 150 FX2 Rear Three Quarter
As we built this beauty over the course of a year, several companies actually used our EcoBoost-powered F-150 to prototype and build parts off of. That list of components is extensive, so we’ll quit with the banter and get right to the goods. Banks Power knows turbocharged engines. The company has a long history of making big power from turbodiesels and gas engines alike, so when we dropped off our barely broken in EcoBoost to the Banks engineers, we knew something special was going to come out of their shop. Special indeed. Up front, cool, dense air is forced into the Banks Ram-Air intake and sent into the factory turbochargers tuned to 15 psi. Once the air is quickly spooled up, the forced-induction flows through a massive Banks intercooler, which is instantly cooled by a Banks Straight-Shot water-methanol injection system. A smooth-bore Paul’s High Performance throttle body ensures the airflow gets sent to the EcoBoost intake manifold. A custom tune by the Banks team is controlled by a Banks iQ 2.0 Man Machine and makes the most out of the Ford’s 213ci V-6. Helping the exhaust flow as freely as possible, Banks 3-inch down tubes feed air into a 3-inch Banks Monster exhaust with a satin black tip. Add up all the go-fast parts, and the 3.5L is good for a whopping 397 rwhp and 463 lb-ft of torque.
Power was available in spades, but much like the Ford GT that inspired our truck build, we needed to do more than just go fast in a straight line. A complete sport suspension from Belltech did more than simply lower the truck -- it also upgraded the front struts and rear shocks with performance units. With the hunkered-down stance, we added incredible 22-inch three-piece DUB.FIVE wheels from DUB.1/MHT. To help us achieve the look we desired, Eddie Motorsports handled powdercoating the centers in satin black. The five-spoke wheel design on a six-lug truck looks exactly how we hoped it would: stunning. Keeping with the performance theme, we added 285/40R22 Nitto NT420S tires. An extra-large front sway bar from Hellwig controls body roll and helps the truck handle more like a sports car than a pickup commonly found in the Home Depot parking lot. At this point, we had plenty of go, but we still needed more whoa. Stopping chores are handled by big 15-inch Baer rotors, which are clamped by six-piston Baer calipers. Now things were getting interesting.
A factory-modified pickup has a certain concept look that screams “unattainable” with a subtle undertone that whispers “but don’t you wish you could have it.” The exterior look was vital to the project’s success, as the GT has a couple of color combinations that are undeniably modern while still paying homage to their classic predecessors. Sterling Gray is the perfect basecoat for a set of slightly lighter gray racing stripes. We can handle a lot of mods at our Eastwood Tech Center, however, we don’t do our own painting. That important task was handled by the pros at LGE*CTS, in San Dimas, California. Star painter Theresa Contreras masked off the signature stripes running from the roof, down onto the Striker Trucks fiberglass hood, Striker Trucks front bumper cover, and back down the Striker Trucks/Gaylord fiberglass tonneau cover. A Street Scene roll pan and hidden hitch with flip-up license plate cleans up the rear view, while a set of Striker Trucks fender vents gives the F-150 a hint of concept truck flair. Perhaps two of our favorite exterior mods are the black mesh grille from Paramount Restyling and the factory HID headlights from a Raptor with vehicle-specific wiring harness from RaptorRetrofit.com. Body man extraordinaire Miguel Estrada, also from LGE*CTS, handcrafted the Paramount Restyling mesh grille for the lower bumper cover. The fit and finish is flawless. Keeping the truck functional, we partnered with Auto Customs to add a BedRug to protect the bed.
Inside the Super Cab, Roadwire two-tone perforated leather seats add style and comfort. A full audio system from MTX was installed by Audio Innovations in Glendora, California, and includes an application-specific Thunder Form subwoofer enclosure under the rear seat. Powering the audio, an Interstate AGM7 battery never runs low on juice. 3M security window film prevents thieves from smashing and grabbing, while also keeping the sun out of our eyes when racing around the track. Other trick items include the Banks iQ 2.0 Man Machine touchscreen-controller/gauge monitor and Banks Straight-Shot gauge in a Roush A/C vent pod. Performance and style -- a combination we always enjoy.
We’re thrilled with the final result. Ford Motor Company also enjoyed the fruits of our labor as the company used the F-150 in its booth at the SEMA show -- an honor we don’t take lightly. The Ford GT was a no-holds-barred street terror that pushed the limits and was a genuine trendsetter. Our hope is this EcoBoost-powered FX2 will be viewed similarly and maybe one day we can look back and say Truckin had a role in future builders creating performance trucks. 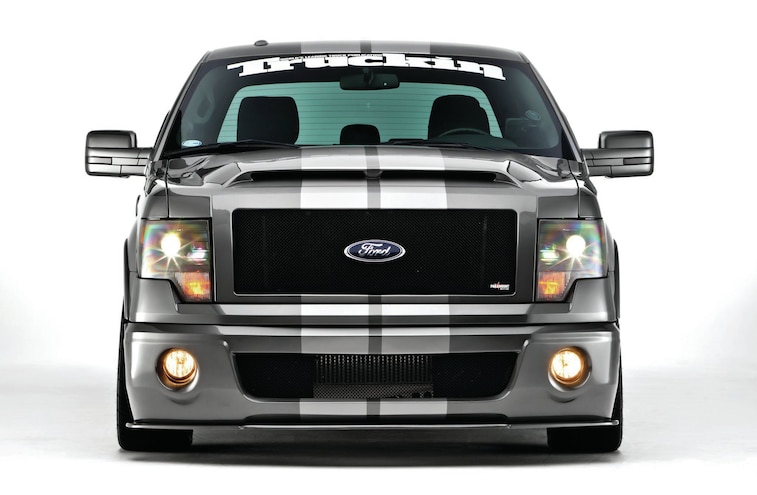 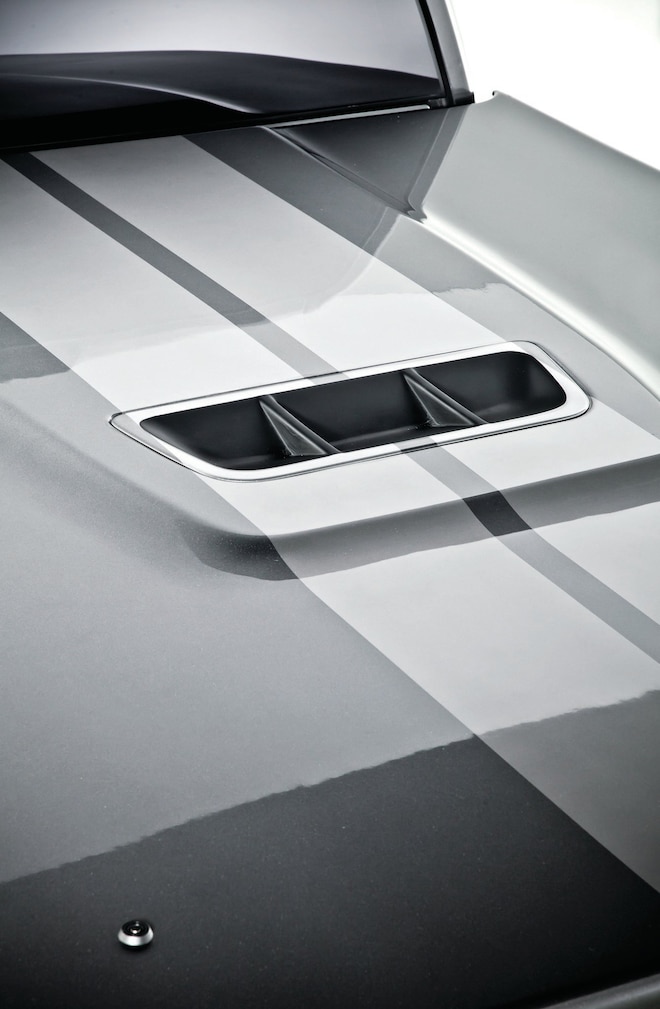 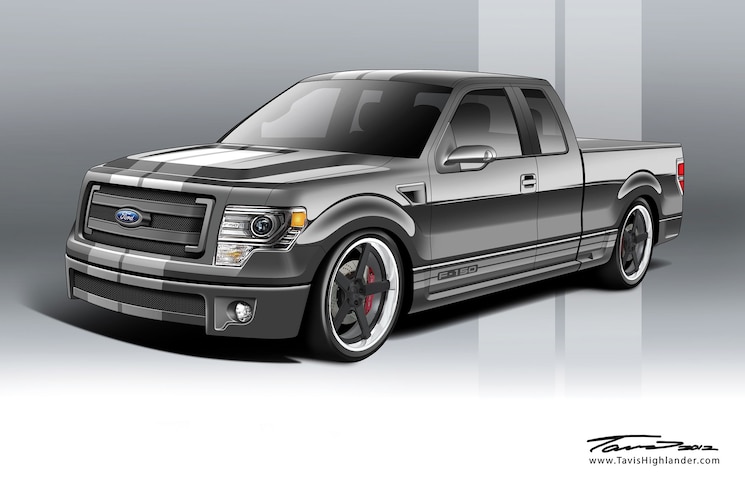