Massaged Metal: Not your typical ’66 GMC with a 6.7L HO Cummins diesel engine 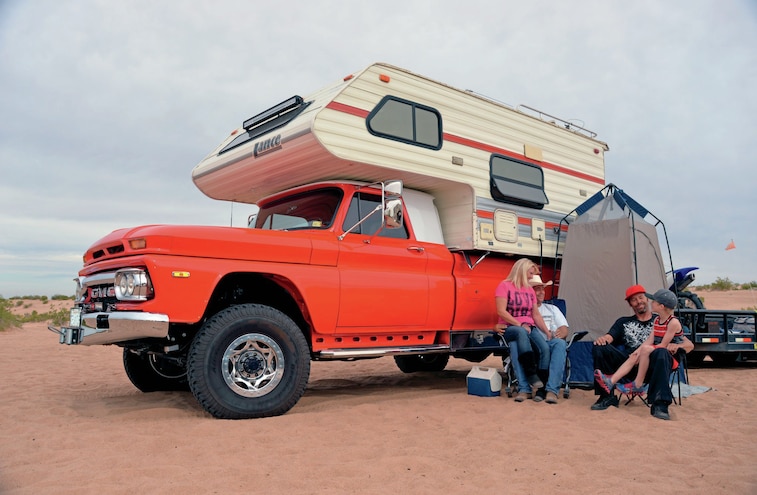 “What is wrong with you!?” exclaimed Todd Lemke’s Lakeside, California, suburbanite neighbor. She was disturbed by the noise he was making in his garage while cutting up a pristine running and driving 1966 GMC truck and a brand-new 2012 Ram 3500 dualie.
What she didn’t know is that Todd, a self-proclaimed heavy equipment oiler, and his father, Dick, had a plan to take the best of both trucks and meld them into one. If you saw Todd’s GMC camper from afar you’d think it was an extremely clean and meticulous restoration. Upon closer inspection you’d hear the unforgettable clamor of a Cummins diesel and think he did an awesome engine swap too, but you still wouldn’t fully know what you were looking at. 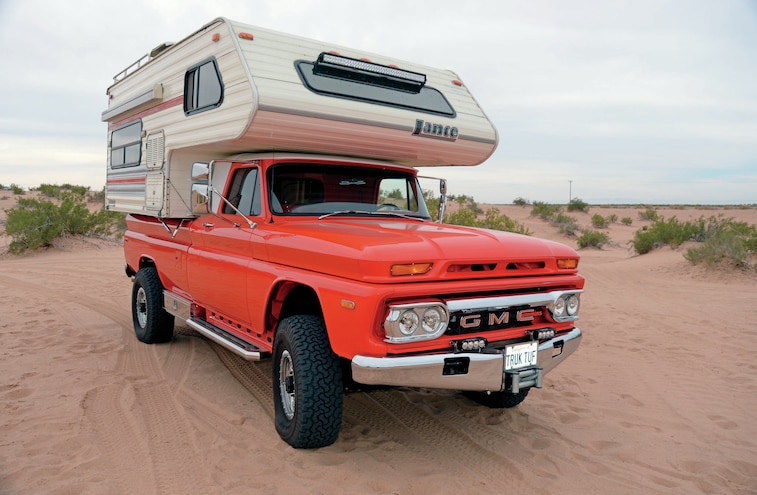 View Photo Gallery | 17 Photos
Photo 2/17   |   Todd Lemke wanted a functional do-all camper and tow rig wrapped in a cool-looking vintage shell. A ton of bodywork was done to graft the ’12 Ram and ’66 GMC trucks together. Once the bodywork was completed, the whole thing was hosed in PPG Concept Sunset Red single-stage paint.
It started off simply enough. Todd used the 1966 GMC truck for camping and towing. He had owned the truck since the late 1990s and it had a fuel-injected tall-deck 427ci big-block and TH400 transmission. But the brakes weren’t really good enough, the frame was too weak, and Todd wanted a real truck engine under the hood. A few trips with a tape measure to the local Ram truck dealer confirmed he could mate his running and driving truck with a newer truck to build one heck of a custom camper/tow rig. He ended up purchasing a brand-new, standard-cab longbed Ram 3500 HO Cummins dualie 4x4 from a dealer in Arizona, and interestingly enough, planned to tow it home with the GMC. The idea was to cut up the zero-mile 4x4. The plan quickly went out the window when the dualie Ram wouldn’t fit on the trailer and the GMC smoked a transmission on the way home. Then, when maneuvering the ‘66 up onto the trailer for the new dualie to tow, the GMC’s steering box sector shaft snapped, further confirming that the truck was ready for a mechanical makeover.

"“Anything that was welded, fabricated, or modified was done in the Lemke garage over a period of eight months time.”"

Todd and his father are meticulous metalworkers. Most people wouldn’t recognize the work put into the truck. GMC fanatics however, will quickly see that it’s not just your typical old body swap on a new truck frame. The fenders, hood, and even the cab have been stretched and massaged to completely graft the‘66 GMC to a 212 Ram 3500.
The Ram was backed into the garage where it was dismantled and the top portion of the cab was unceremoniously lopped off, leaving the floor, firewall, and rear bulkhead. The ’66 GMC pickup cab was then cut to match what was left of the Ram cab. Countless hours of custom bodywork filled in the gaps to maintain a factory look. A total of 13 inches was added to the GMC cab and another 8 inches were added to the hood and fenders to make the ’66 GMC pickup fit the unmolested Ram frame. Todd and his dad worked on the truck on weekends and for a couple of hours every night after work. Anything that was welded, fabricated, or modified was done in the Lemke garage over a period of eight months time. 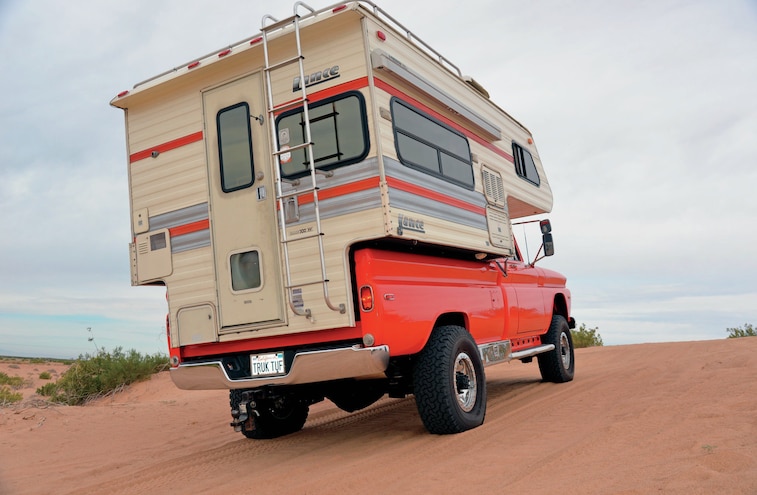 View Photo Gallery | 17 Photos
Photo 6/17   |   The rear bumper is from the ’12 Ram, but it has been modified to match the GMC bodylines. Todd plans to restore the ’92 Lance camper, but thus far has been unable to locate a company that specializes in that kind of work. 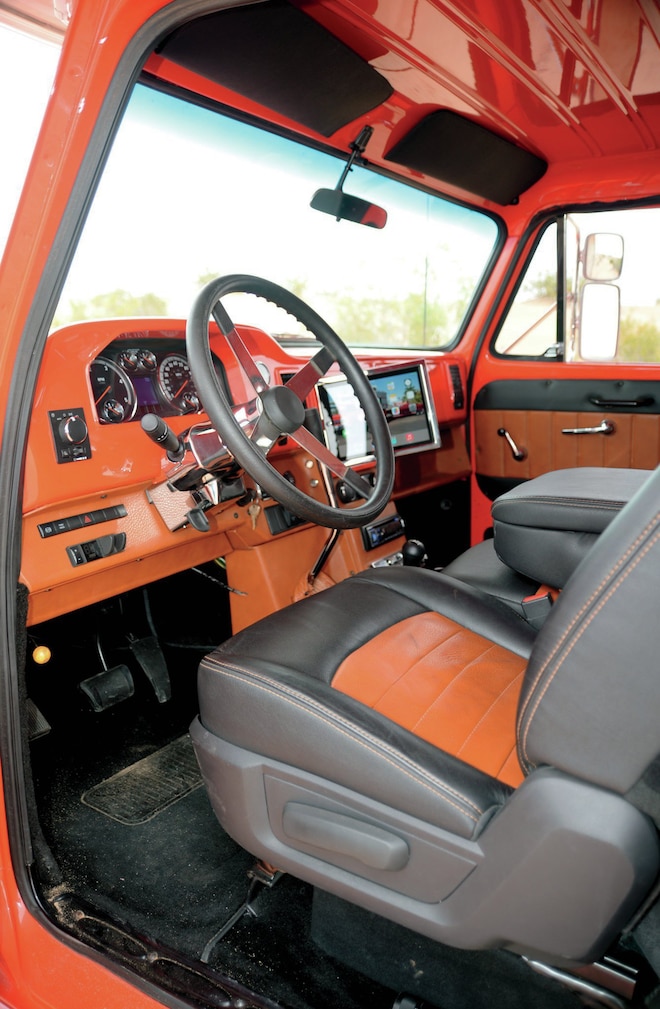 View Photo Gallery | 17 Photos
Photo 10/17   |   Custom 1966 Gmc Pickup Interior
The leather Ram truck seats were retained. All of the Ram’s instrumentation has been set into the original steel GMC dash. An iPad was added to the center and it flips out so the driver has better visibility. The old sprint car steering wheel from the ’66 was reused and attached to a hand-formed stainless steel steering column. The factory Ram steering wheel controls and other switches were put into the lower dash and wrapped in one full cowhide. 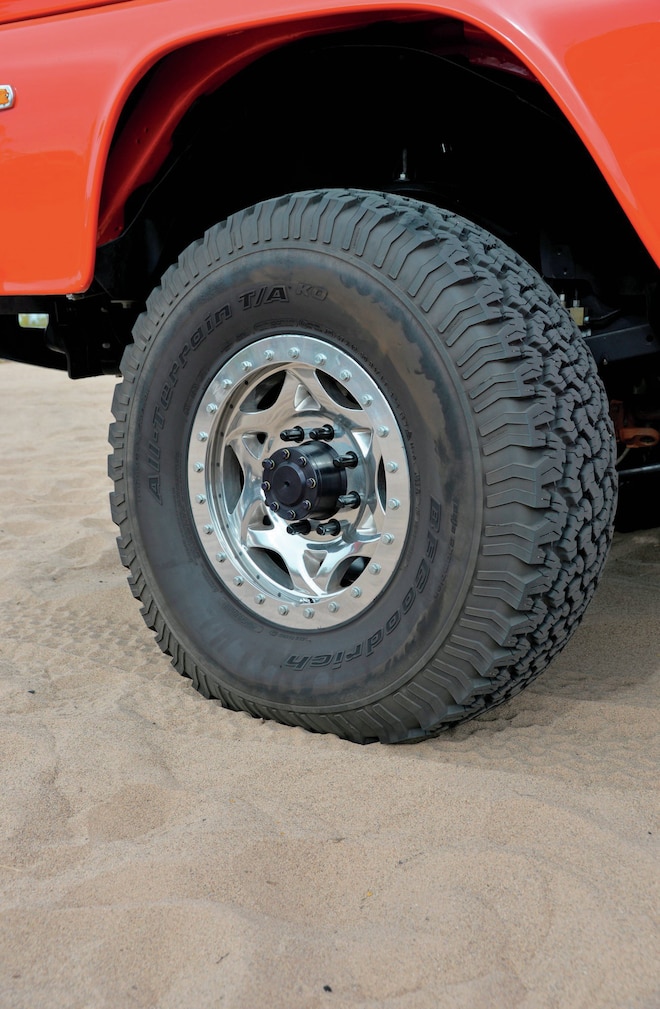 - OF
By John Cappa
13 Articles