A Neon Orange Raptor that Packs a Punch

In the animal kingdom, a display of bright fluorescent colors typically means only one thing: stay away. Whether it’s a frog that secretes powerful poison from its skin or a snake that can kill a man with a single strike, if you don’t take these brightly colored warning signs seriously, you’re going to have a bad time. This principle also holds true for Jordan O’Krinsky’s 2012 Ford F-150 SVT Raptor. It’s tough, capable, and covered in a bright orange hue that warns bystanders of its potency.
The build began with a bone-stock 2012 Ford F-150 SVT Raptor, which Jordan promptly drove to his family’s shop, Extreme Offroad & Performance, in Katy, Texas. Extreme has built many Truckin cover and feature trucks in the past, so transforming an ordinary Raptor into something over-the-top would be a simple affair. First, the already-impressive factory suspension was removed and replaced with something even more capable: a set of King 3.0 remote-reservoir coilovers up front and 3.0 bypass shocks in the rear. These adjustable dampers make sure the Raptor can handle tough terrain at high speeds, and they serve to smooth out the ride on the highway as well. Baer Extreme+ six-piston Big Brakes improve stopping power. To further improve off-road performance, a set of 35-inch General Grabber tires was mounted to 20-inch Fuel Maverick wheels and bolted on. 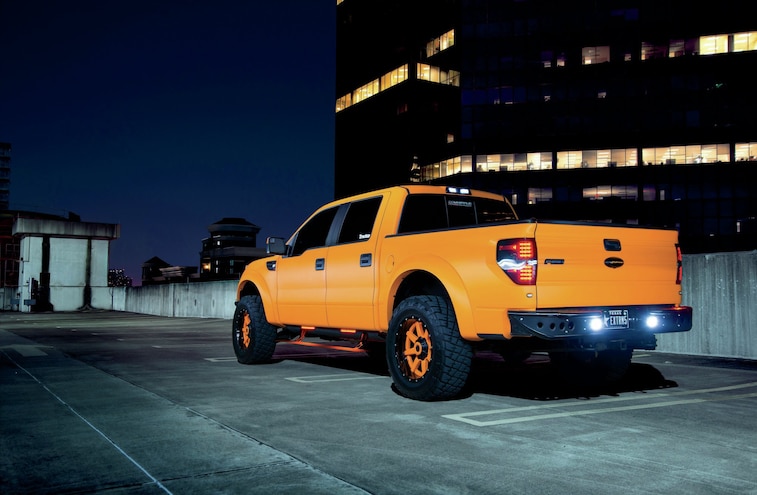 View Photo Gallery | 7 Photos
Photo 2/7   |   2012 Ford F 150 SVT Raptor Rear
With the stance dialed in, it was time to add some power to the 6.2L SVT mill underhood. That power comes by way of a 2.9L Whipple supercharger, which pushes 8.8 psi into the motor for a total output of more than 560 rwhp. The added boost was compounded by the addition of American Racing Headers long-tube headers, as well as a custom exhaust system that terminates in a spinning Gatling-gun tip. These bolt-on modifications are more than enough to propel the SVT Raptor down trails at breakneck speed.
Now that the Raptor’s capabilities had been upgraded, it needed a new look that represented its new potential. The entire truck was wrapped in Lamborghini matte orange, including the Fuel Maverick wheel faces. Plain an Simple by Design added orange LED strips in the projector headlights, while orange puddle lights for the AMP Research PowerSteps tie in the theme. Even the Ford badge on the tailgate was replaced with a custom orange “Extreme” logo. Gloss black Addictive Desert Designs bumpers provide additional ground clearance, and their integrated Rigid LED lightbars illuminate the road in front of and behind the truck. Finally, Jordan hydro-dipped many accents throughout the truck in a black and orange pattern that resembles a cross between honeycomb and digital camo. These accents can be found under the hood, inside the cab, and even under the truck’s tonneau cover.
Jordan unveiled his newly completed SVT Raptor at the 2013 SEMA show in Las Vegas, along with several other projects Extreme finished for the show. If you come across this brightly colored Raptor in its native habitat of Katy, feel free to look, but don’t forget the serious capability that lies beneath its shocking exterior. 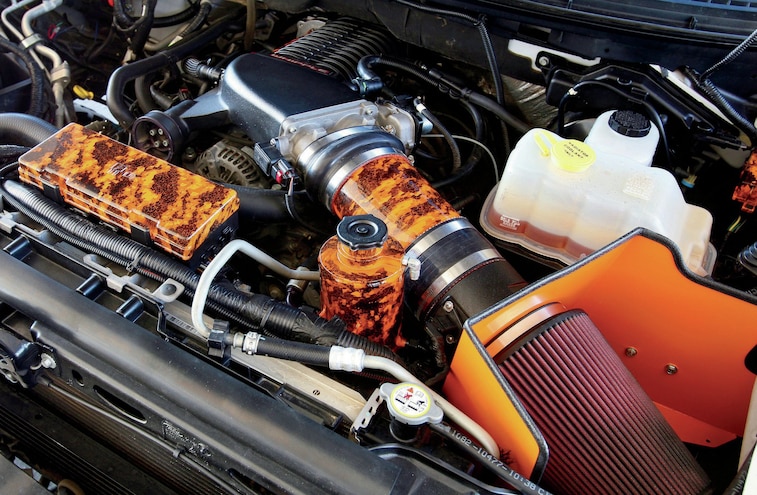 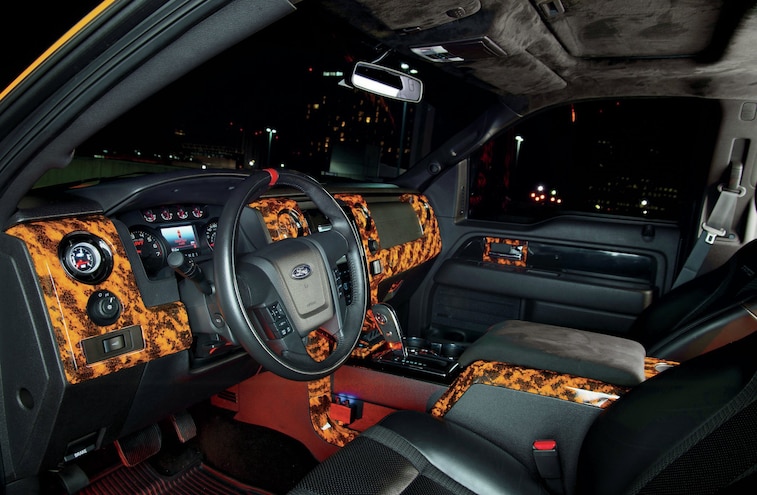 View Photo Gallery | 7 Photos
Photo 7/7   |   2012 Ford F 150 SVT Raptor Interior
Jordan is Extreme Offroad’s resident hydro-dipping expert, and he disassembled the Raptor’s interior and coated as many pieces as he could in orange and black digital camo.