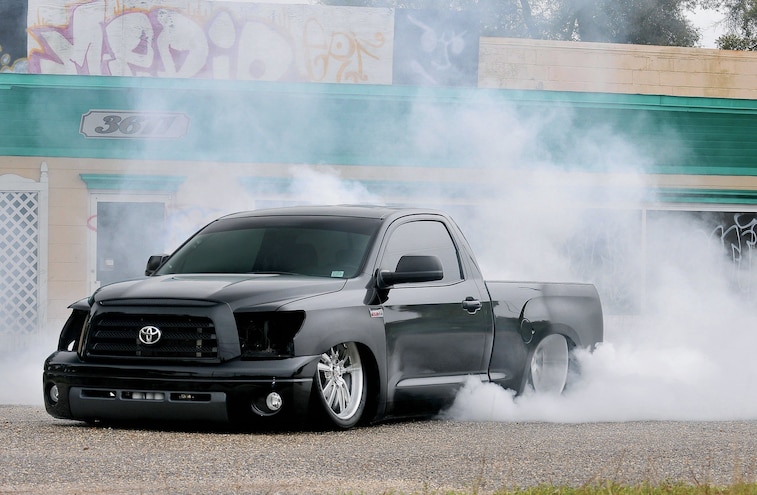 If there’s ever been a make and model that gets the custom truck community up in arms, it’s the Toyota Tundra. Whether people are claiming it’s poorly made foreign junk or simply not as strong as the Big Three’s offerings, naysayers seem to appear out of the woodwork when you roll up in a custom Toyota. Knowing this, Robbie Floyd of Mobile, Alabama, chose to build a Tundra that would shut these dissenters up once and for all. So, he picked up a 2008 Toyota Tundra regular cab truck and teamed up with Mike Hathaway of Pensacola, Florida’s Hathaway Designs to create something that’ll make your jaw drop—and it’s not even finished yet.
The build began by pulling the body off the frame and starting from scratch with a fully custom frame built in-house at Hathaway Designs. This helped bring the ride height down considerably, but for an even lower appearance, the body was dropped 5 inches. This required lowering the 5.7L V-8 engine and steering rack 2 more inches for clearance. Next, Mike Hathaway built a killer suspension setup for the truck, including custom spindles, a fabricated four-link with Watt’s linkage, Slam Specialties ’bags, QA1 shocks, and AccuAir lines and valves. With these modifications, the Tundra is able to tuck 24x9 and 24x12 billet Raceline wheels under its fenders at the flip of a switch. 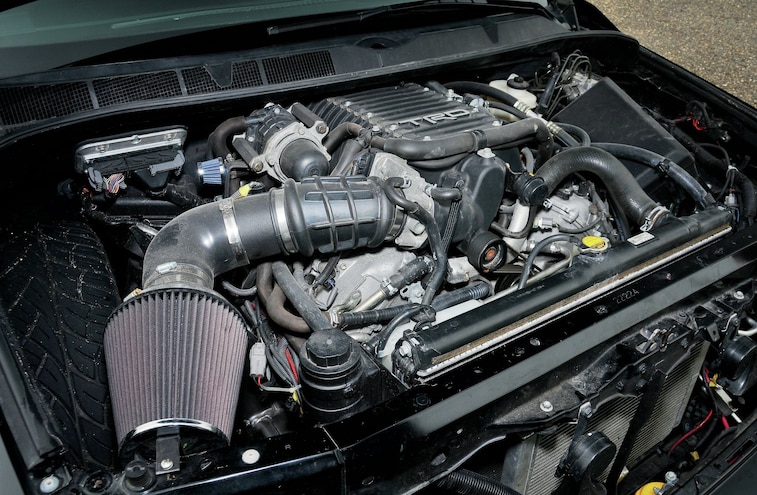 View Photo Gallery | 4 Photos
Photo 2/4   |   It may not look like much to the untrained eye, but this Tundra’s factory-option TRD supercharger kit boosts the engine’s power output by more than 120 hp.
Robbie’s Toyota Tundra now had a stance that snapped necks—but that wasn’t enough for him. He wanted enough power to obliterate the wide Nitto rear tires and leave the line like a bat out of hell. Therefore, the truck’s 5.7L V-8 was fitted with a TRD supercharger kit, including an Eaton TVS blower, cold-air intake, high-flow injectors, and air-to-water intercooler. A custom exhaust with MagnaFlow muffler was also added. These modifications took the Tundra from its factory 381 hp and 401 lb-ft of torque to a whopping 505 hp and 550 lb-ft of torque—more than enough to show the trash-talkers what’s up.
The truck’s exterior remains unfinished, although Cadillac vertical taillights and a roll pan have been molded into the rear for a smoother look. Inside the cab, Katzkin two-tone leather seats, suede-wrapped door panels, and a smoothed and painted dash give an upscale feel. Boost and oil pressure gauges also help Robbie make sure the engine is at its best. There’s still plenty of work to be done but, as it stands now, this Tundra never fails to draw a crowd. Robbie tells us, “I just wanted my truck to be unique,” and we’d say he has already met that goal. 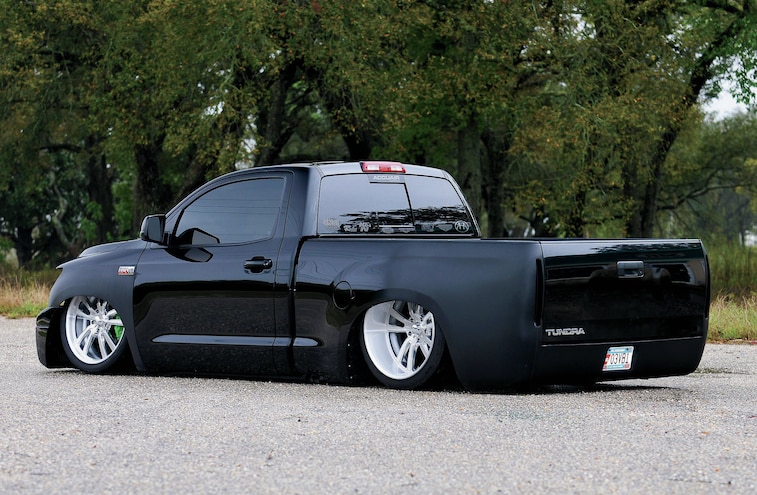 View Photo Gallery | 4 Photos
Photo 3/4   |   A 5-inch body drop and frenched Cadillac taillights give the Toyota a distinctive look that immediately stands out at shows. 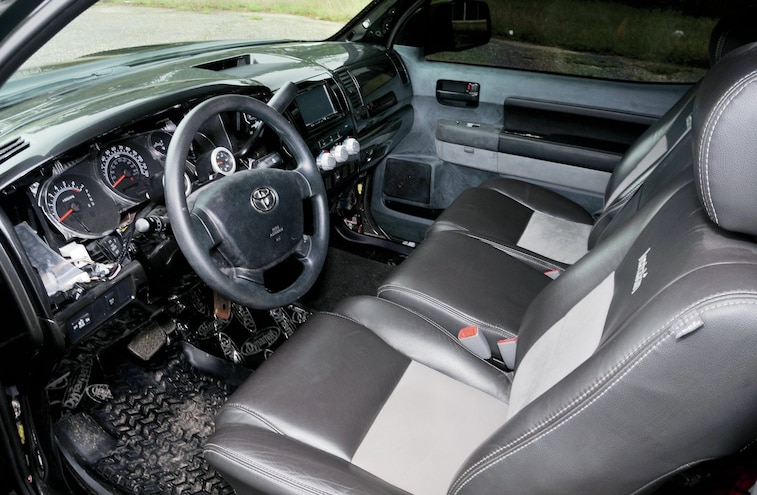