Recently, we had the pleasure of getting out of the office and into the desert outside Las Vegas to check out the latest offerings from Toyota Racing Development. The new TRD Pro package is available on the Tacoma, 4Runner, and Tundra, and we’re going let the cat out the bag early and tell you the coolest part right up front: all of the components that make up a TRD vehicle are available á la carte through your local Toyota dealer.
The TRD Pro can trace its roots back to 1983, when Toyota began to sponsor Ivan “Ironman” Stewart in Mickey Thompson’s Stadium Truck series. He ended up winning 17 stadium races with TRD, along with three Baja 1000 wins and four SCORE championships. If you are anywhere near our age, you no doubt spent countless hours playing Ironman’s Super Off-Road -- the graphics inside and out were TRD through and through. Ivan, along with the TRD engineers, was our host for an entire day of thrashing on the culmination of TRD’s 30 years of off-road experience. 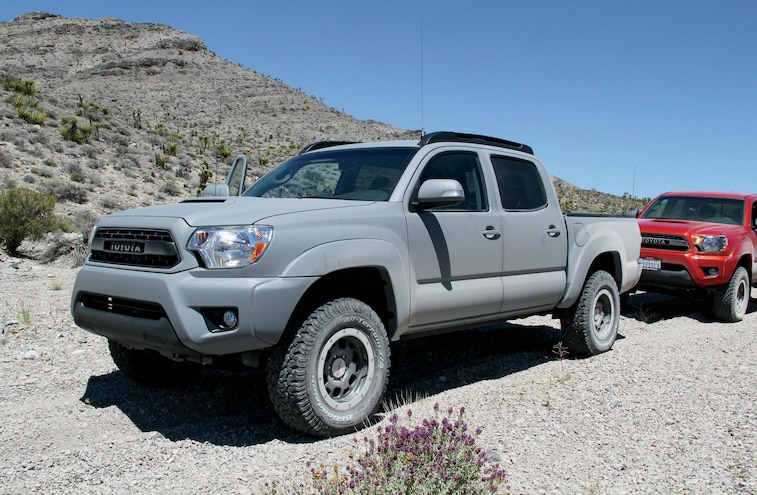 View Photo Gallery | 12 Photos
Photo 2/12   |   The engineers drove identical TRD Pro trucks, except theirs had this badass-looking flat-gray wrap on them. We ordered ours in that color, and it was a no-go.
We began our day atop the parking garage of the Hard Rock Hotel, where we photographed the trio of Inferno Orange trucks (the other offerings are black or white) before they were filthified and got to walk around with the engineers. One of the main themes we immediately started to pick up on was these trucks were not built with a bunch of bolt-ons as an afterthought. Most easily noticeable was that each truck has its own unique wheel design, albeit in black, and features a different tire line to complement each of them. These TRD Pro trucks were developed by TRD engineers working alongside Toyota engineers to get the absolute most from the factory design. On the Tacoma, for instance, they explained that the brake line mounts were modified for extra droop and upstroke, and that the suspension was built around the steering gear and drive axles. We also learned that each of the Bilstein remote-reservoir shocks and Eibach coils were custom-built and heavily tested for each application. Since travel has been maximized within the stock packaging and geometry, you can now buy a factory off-road package on a Tundra, 4Runner, or Tacoma that has been thoroughly engineered and tested to work together -- and it’s all covered by a three-year or 36,000-mile warranty.
Soon we were on the road, caravan style, out to the Pioneer Saloon in Good Springs, Nevada. Built in 1913, the saloon is world famous thanks to the countless movies it has been featured in and would serve as our home base for switching out trucks as well as a great place for a barbecue lunch. We took each truck out for a good couple of hours of off-road driving. At first, we thought we were going to be paced by the engineers, since they were leading us in groups of five on the trails, but we were stoked to see them take off like a bat outta hell in the fast sections -- and believe us when we tell you we were moving! In the Tundra, we were running at 65 mph on the power line roads on a regular basis and were comfortable every minute of it. The Tundra easily picked up our “suckin’ up the bumps at high speed” award. We were also presented with a whole assortment of technical sections, some of which even required some basic crawling skills. Here the award went to the 4Runner. It seemed to twist and roll over any obstacle we put in front of it.
By the time we had cycled through all the trucks and took a wild ride with the Ironman himself, we were sold on the fact that these factory offerings are some of the best Toyota, or anyone else, has dropped on the showroom floor. Price points and quantities have yet to be released, so only time will tell if the TRD Pro lineup will strike a chord with consumers like some other recent off-road packages have. Now, if we could only get them to offer the TRD supercharger as standard equipment! 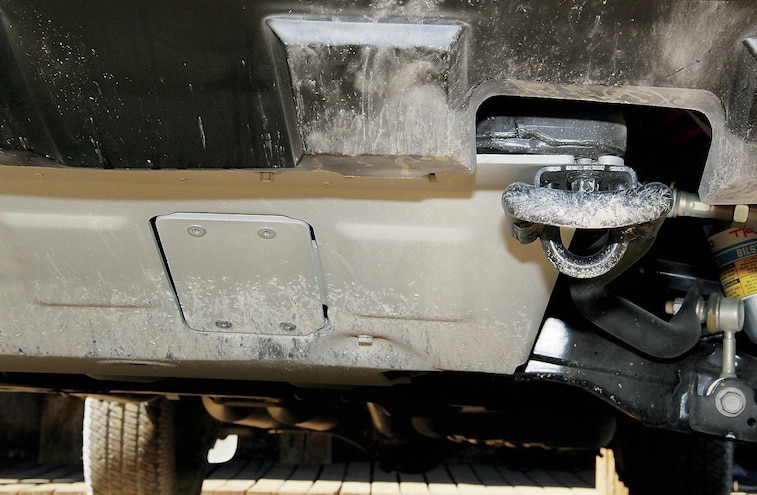 View Photo Gallery | 12 Photos
Photo 6/12   |   Here’s our Tundra’s functional TRD skidplate after our desert session. Like we said, we gave these Toyotas the business! 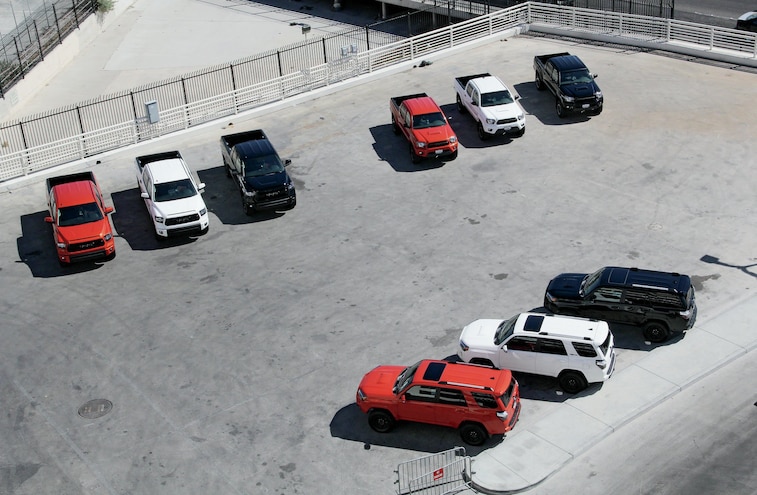 View Photo Gallery | 12 Photos
Photo 10/12   |   Atop the parking garage of the Hard Rock Hotel, where we photographed the trio of Inferno Orange trucks. 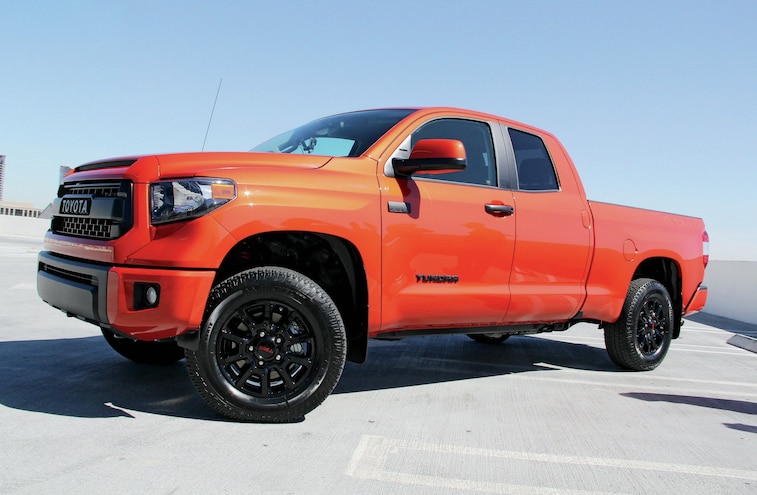 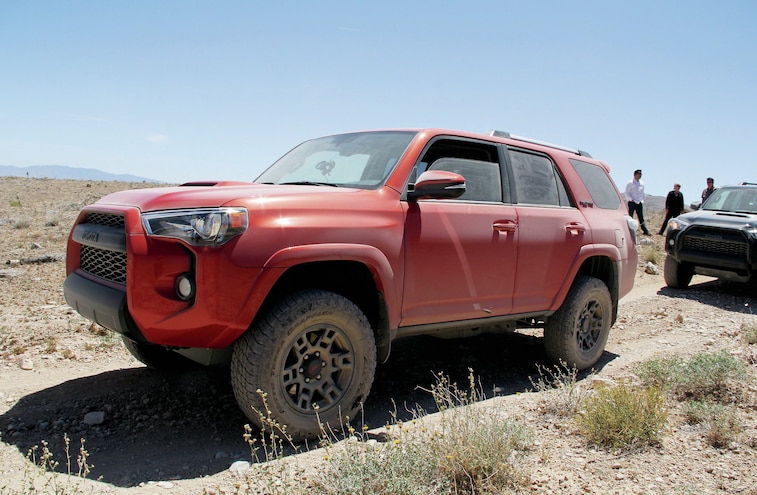 Truckin
Truckin
Toyota Tundra Suspension Lift with BDS, Fox & Fuel
We don’t get to do a lot of Toyota tech around here. It’s not because we don’t want to. We lov...
Jeremy Cook – Jul 6, 2020
Truck Trend
Truck Trend
Daily Driven: 2018 Toyota Tundra Limited
If ever there were a vehicle in need of an overhaul Toyota’s Tundra would be it. With its last maj...
Jason Gonderman – Jul 12, 2019
Truck Trend Network
Truck Trend Network
Toyota to Base Next-Generation Tacoma and Tundra on the Same Platform
Toyota will base the next-genTacoma and Tundra on the same platform—cod...
Brett T. Evans – Apr 8, 2019
Truck Trend
Truck Trend
Adventure: 2019 TRD Pro Family Drive On The Rim Rocker Trail
We head out to conquer the Rim Rocker Trail with the folks of FJ Summit a...
Sue Mead – Nov 16, 2018
Join Our FREE Truck Trend Network Newsletter