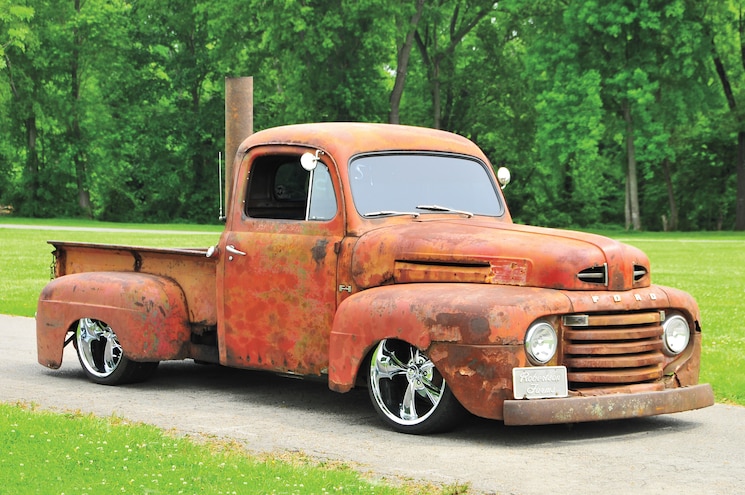 Matt Robertson, a farmer from Olmstead, Kentucky, watched this old, 1950 Ford F-1 pickup truck rot away for years next to his neighbor's barn. The truck belonged to the neighbor's dad, Bill Glenn, who thought one of his grandkids might want it someday, so it wasn't for sale.
Bill bought the 1950 Ford F-1 brand new from Todd County Ford and used it on his farm until buying a new truck. The 1950 sat outside for the next 30 years. 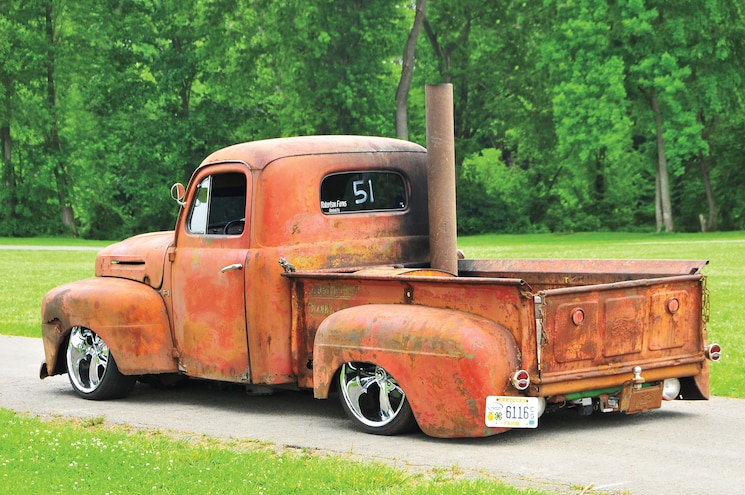 View Photo Gallery | 12 Photos
Photo 2/12   |   Nothing was done to the patina of the truck. This is exactly how it looked when it sat in a field rusting away. At the dragstrip, Matt’s truck has covered the quarter-mile in 13 seconds.
When Matt started pestering Bill about the truck, the grandpa asked each grandchild if he or she wanted it. However, after none of the kids expressed any interest in taking the old Ford, he sold it to Matt for $500. The purchase price was pretty fair considering the condition the truck was in. The original flathead V-8 was still in place, as was the original interior, or what was left of it. But on the outside, the truck's body was badly deteriorated. Matt didn't care what it looked like. In fact, he decided he loved the way it looked and would do all he could to keep it looking that way while making it roadworthy (well, at least farmworthy).
In 15 short weeks and about $16,000 later, the truck was restored to the level you see here. We can't say it's "done," because there's no doubt Matt will find some more things to add or change in the future. Matt says it was a fun 15 weeks but it was tiring, too. "It was all I focused on," he says. Now they get the chance to take the 1950 to car shows and show it off, or just drive into town for some fun.
Electing to install a diesel engine in his project truck was one of Matt's first decisions. "I knew I wouldn't get as much enjoyment out of it if it had a gas motor in it," he said. With a revolving crew of help from his father Roy, brothers Glen and Mark, friend Erik Castile, and girlfriend Jamie Wilson, the job was completed (anyone who happened to swing by the farm to visit was often pressed into service as a welder, grinder, wiring expert, or what have you). 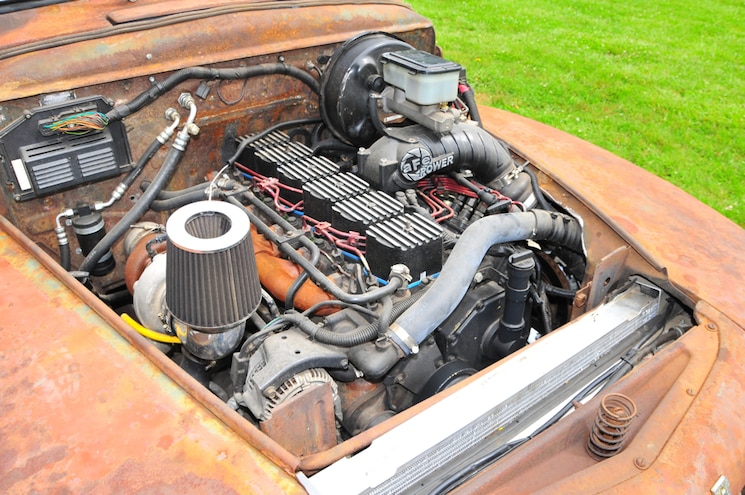 View Photo Gallery | 12 Photos
Photo 3/12   |   The 5.9L 12-valve Cummins engine has an Industrial Injection PhatShaft turbo, AFE intake, and a custom exhaust.
The first order of business was to remove the body from the frame and take off the front and rear axles. Once this was done, they fully boxed and plated the frame to prepare for the heavier diesel engine. Matt points out that Jamie did a lot of the welding. The crew installed a Mustang II front suspension on the pickup, along with a Dodge Ram steering column to control the power rack-and-pinion steering. A Wilwood adjustable proportioning valve helps control the stock Dodge master cylinder and disc brakes. Braided stainless steel brake lines help ensure firm braking.
The pickup's frame was C-notched at the back, and an 8.8-inch Mustang rearend was installed with a custom-triangulated, four-link rear suspension system with Classic Tech airbags. Matt put an UPR billet differential cover on the rear end. With the frame and suspension properly set up, Matt purchased a set of 20-inch Ridler 695 wheels and Nitto NT555 tires (285/30ZR20 in the rear and 235/35ZR20 up front) for the truck. That's pretty much the end of the pretty stuff—unless you count the two Optima RedTop batteries that are not visible on both sides of the frame, and the air tank and dual compressors mounted between the rear framerails.
The 5.9L 12-valve Cummins engine and 47RE transmission were taken from a 1994 Dodge Ram Matt found on Craigslist. He used the engine and transmission, and then parted out the rest of the truck. Matt built the engine oil pan himself and added two 12-inch Rapid Cool electronic fans to keep the truck running cool. A radiator out of a 1998 ½-ton Chevy was used. 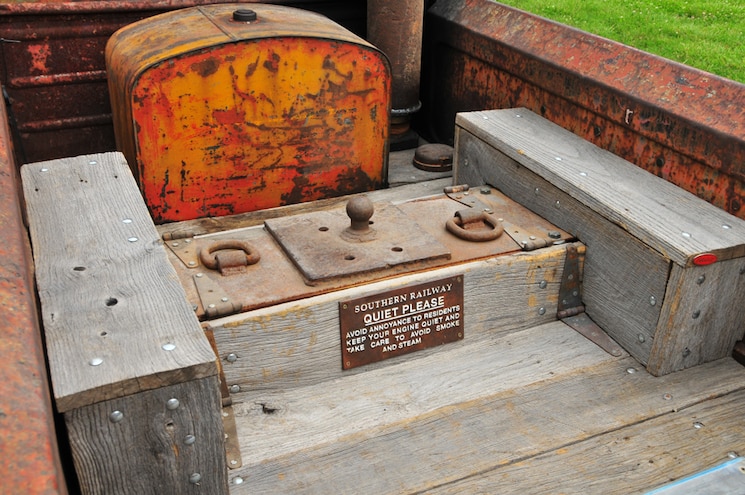 View Photo Gallery | 12 Photos
Photo 4/12   |   Matt used a lot of parts for this truck that he found lying around the farm. The bed floor and inner fenderwells were built out of barn wood. Even the Southern Railway sign was found on Matt’s farm. The fuel tank is from a combine.
Providing more air is an Industrial Injection PhatShaft 64/14 turbocharger. To complement the increased airflow, Matt added a cut fuel plate and 191 delivery valves to the P7100 injection pump, which was bumped up to provide 16 degrees of timing. When it came time to design the exhaust system, Matt used his ingenuity and crafted a set of screw-on stacks, which can be removed and capped off, and then the exhaust blows out the rust hole in the side of the bed.
The fuel tank at the front of the bed is a metal 1950s combine tank, which holds about 15 gallons. Matt found the tank just lying around the farm, and that's pretty much how he found a lot of the other "decorations" on this unique truck. Like the railroad sign he nailed to the wood bed, for example. The bed is a flip-up barn wood floor and the inner fenders (also made from barn wood) are removable. The entire bed can be removed after taking out four clip pins, which makes removing or installing the rear wheels and tires possible.
In the continuing fashion of using new and old parts, the headlights are modern HID units while the rear taillights are old Duo lamps (they say "STOP" on the glass). The diesel fuel cap is from a farm tractor and is in the original spot on the cab, but it is for looks only. Matt cut the running boards off with a blow torch and replaced all the window glass with new units from LMC Truck. 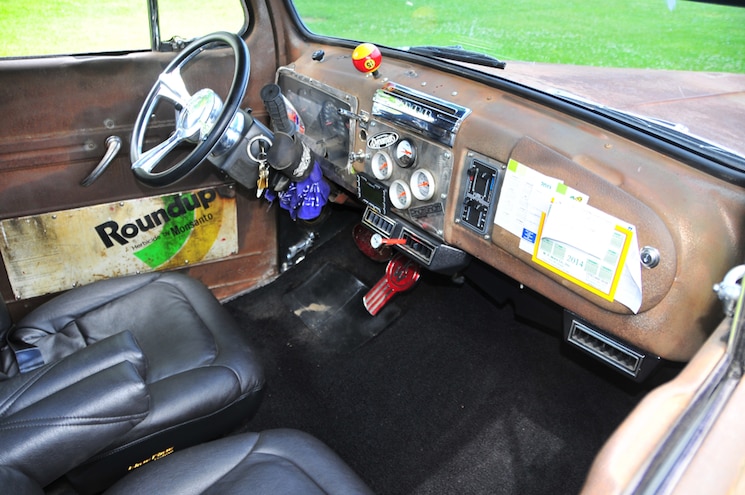 View Photo Gallery | 12 Photos
Photo 8/12   |   All kinds of trinkets and doodads adorn the interior of the truck (notice the number 15 pool ball representing the 15 weeks it took to complete the build?), but the Billet Specialties steering wheel is top of the line.
LMC Truck also provided the carpet for the interior. Matt and Jamie did their own upholstery work on the black leather Bostrom Air Ride seats. A Vintage Air air conditioning unit keeps the occupants chilled in hot weather and the RideTech digital control panel allows for infinite adjustments on the air-ride suspension. This truck may look like it's only built for cruising and posing, but Matt actually uses it around the farm to tow his industrial farm pressure washer and water tank.
You may or may not appreciate the rat rod revival that's growing in the diesel truck scene, but one thing's for sure: You have to appreciate Matt's love of the old and the new—and the way he pulls things together. This farm truck is an amalgamation of parts and help from friends that looks like no other. And that's just what Matt was looking for. 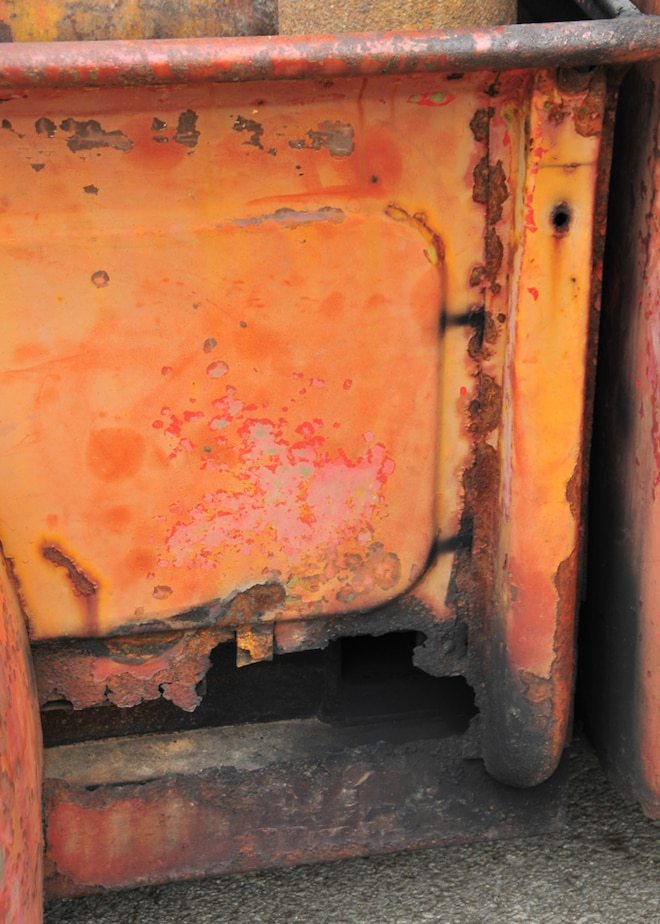 View Photo Gallery | 12 Photos
Photo 9/12   |   When the exhaust stack is capped off, the diesel engine’s exhaust runs out this rusted hole in the bed. 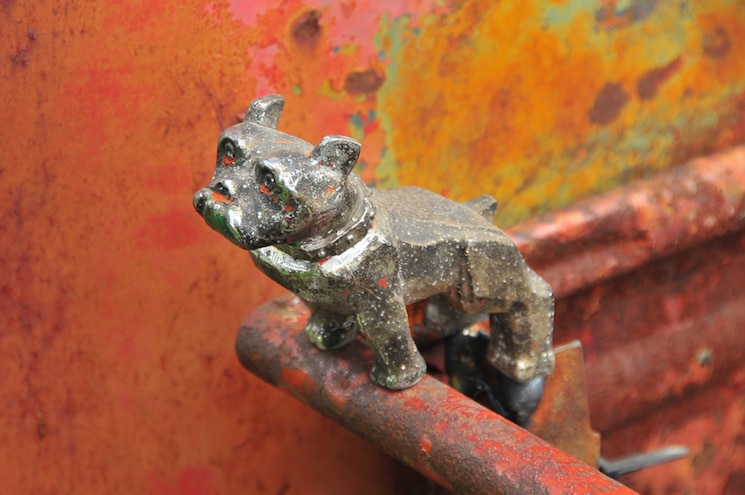 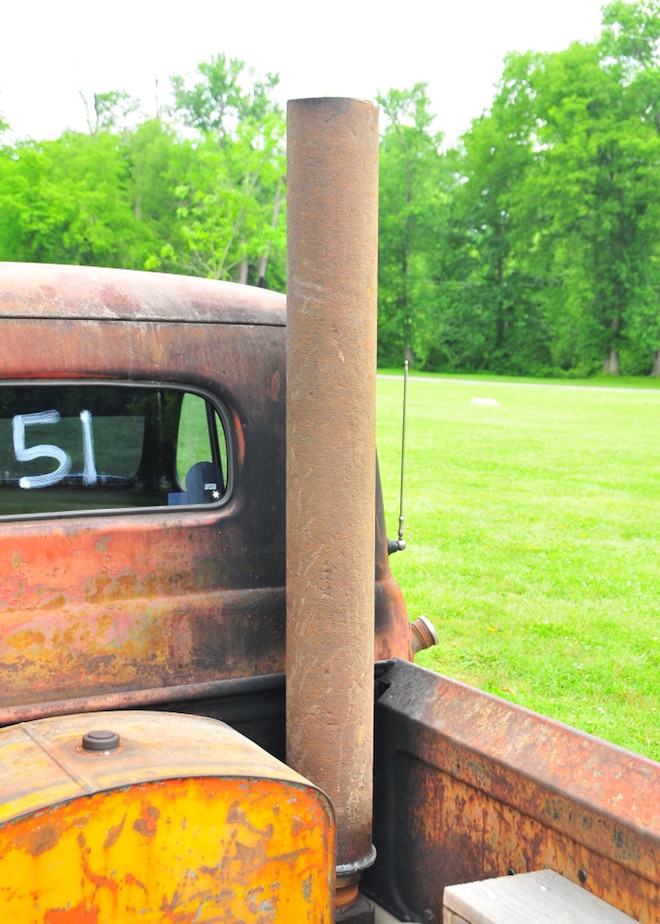 View Photo Gallery | 12 Photos
Photo 11/12   |   Matt built the exhaust stacks out of well casings. They can be screwed off and capped. 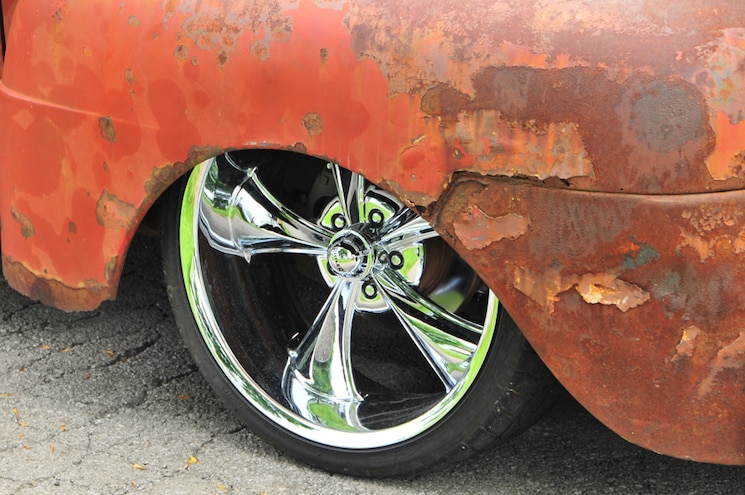 View Photo Gallery | 12 Photos
Photo 12/12   |   With the airbags deflated, Matt Robertson's 1950 Ford lays out pretty low. He blew off the running boards with a torch.