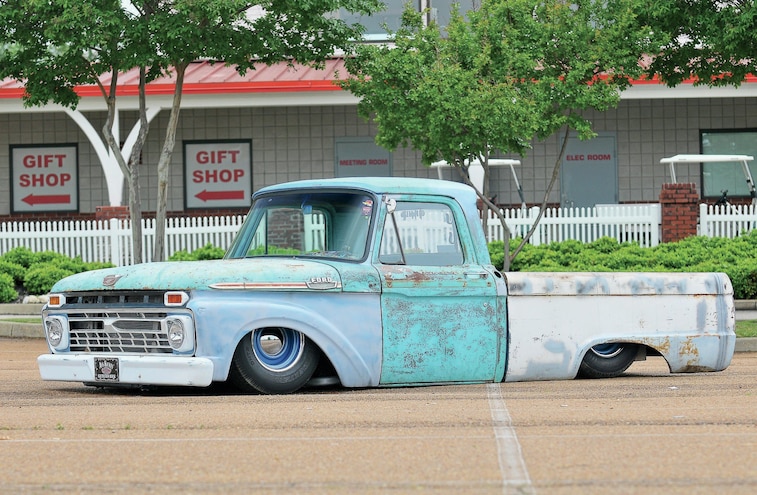 When 32 year-old Jason Danos of Raceland, Louisiana, decided it was time to build a custom truck, he went all out. His choice was to make a one-off custom 1964 Ford F-100, but in order to pull off the perfect build Jason needed a parts truck. However, instead of doing the standard purchase of a second truck, Jason kept buying and building parts. As more and more scrap metal began lying around the yard, his parts truck began to take an unusual form.
Once the build was complete, Jason did the unthinkable. He began piecing together all the parts of metal that were discarded into something he could use. Because Jason had an 1985 C10 front clip in the yard along with the rear end, he made a bold decision. As one of the only purchases Jason made for his new parts truck, he picked up a small-block Chevy crate 350 with a TH350 transmission. An Edelbrock carburetor and electronic ignition were added along with a homemade mason jar overflow jug. 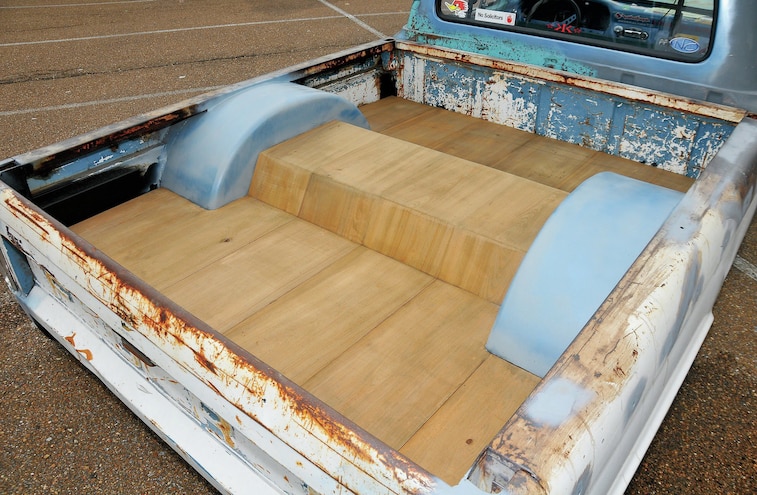 View Photo Gallery | 5 Photos
Photo 2/5   |   The homemade bed floor and bare-bones interior are as simple as they come. The Auto Meter gauges were added to monitor the new small-block and the gun rack deters any would-be thieves.
In order to make this new Frankenstein-styled truck even more unique, Jason decided to bring the old Ford body down to the ground. Using old Mustang parts, he added front suspension as well as a rack-and-pinion steering setup. Upper and lower A-arms were handed down from a friend and slightly modified so the truck could sit even lower. Firestone airbags were added all the way around. A brake booster from an ’81 Corvette was added for stronger stopping. A custom handmade two-link with a Panhard bar was built from scratch. The air supply is straight from compressed nitrogen.
For the cabin of the F-100, Jason kept most of the stock parts, but was able to find the seat and gun rack from an old Ford graveyard that he generally uses to find parts. He added a steering wheel that had been around for years and a set of Auto Meter gauges so the temperatures and volts could be determined. The front half of the floorpan was completely rusted and had to be replaced with all-new sheetmetal. Every inch of the steering was custom-made without using one aftermarket part.
As a member of Negative Camber, Jason maintains an elite level of custom creativity and is always motivated to think outside the box. Although he has many more plans for Frankenstein, the path he took -- and is still headed in -- has enormous potential. A special thanks goes to the Negative Camber family as well as all other family members and friends for all the help and support throughout the project. With the motivation they have given him, a completed Frankenstein is right around the corner. 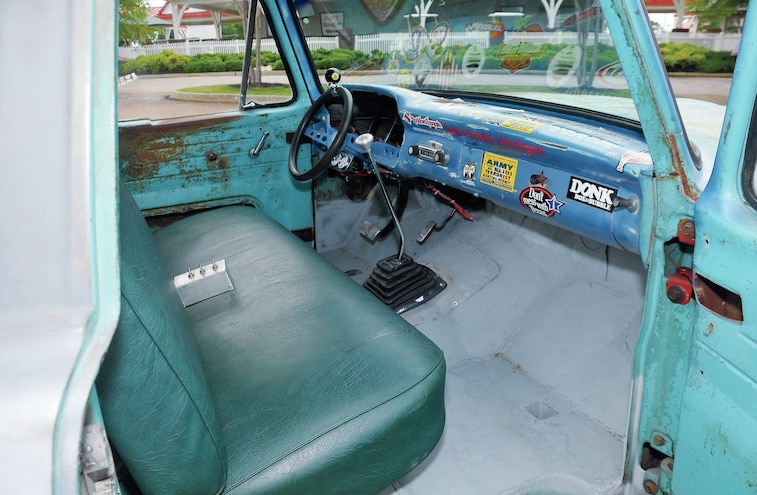