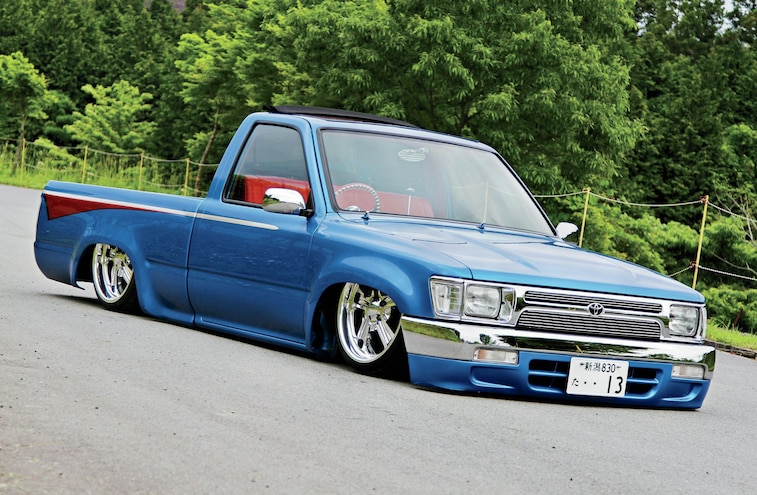 When it comes to building the perfect mini-truck, the beauty is that there really is no “right” or “wrong” way. There is just your way; the way that makes you happy. And the best way to build the perfect mini-truck for yourself is by knowing what you want most out of the truck, and then build it the way that makes the most sense for your own personal wants and needs.
If your goal is to build the baddest full-custom showstopper that cleans out the “Best Of” trophies nationwide then, by all means, go for it! If you’re looking to one-up the paint and body world by going wild on the craziest candy and flake paint combo you can imagine, then make it happen! If you have a fascination for badass suspension and metalwork and want to take custom frame-building to another level, then please do! But if you’re goal is to build the nicest and cleanest little mini that can also serve as a reliable daily driver and take you to shows both near and far, well then listen up, because the guys building minis over the pond in both directions have got this recipe down pat! 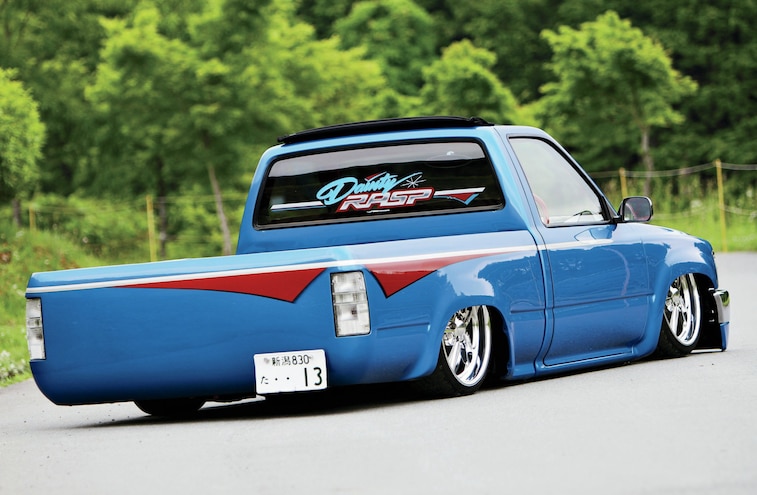 View Photo Gallery | 8 Photos
Photo 2/8   |   1996 Toyota Hilux Rear
In Japan they have a couple things that both help and hurt the custom truck scene. Their safety vehicle laws are pretty stringent over there so if you “customize” the suspension or frame of a vehicle you have to get it inspected. This helps keep things fairly safe, but it also adds to the overall cost of building modified custom vehicles. Another thing is the trailer laws are very different than what we have here in the States. Most of the cities and downtown areas of Japan are packed super tight and have “no trailer” laws on both the highways and streets. This forces most of the guys who live in the city to either rent a flatbed hauler for transport or make sure they build their trucks to drive!
When Akira Tanaka set out to build his very first custom truck he knew three things. He wanted a truck that would be worry free and allow him to drive to shows both near and far. In Japan they make every effort to attend shows that are all over, some as far away as 10 hours, and they drive their trucks (unless it’s a high-end show truck) because of the aforementioned trailer laws. Second, Akira set out to pay homage to the “U.S. style” mini-truck with a clean paintjob and billet wheels that sat flat on the ground. And last but not least, he knew he wanted his canvas to be his favorite truck of all-time: the ’90s Toyota Hilux. So with this plan, he spent the next six years slowly bringing his truck to life. View Photo Gallery | 8 Photos
Photo 6/8   |   1996 Toyota Hilux Suspension
Akira also wanted to do as much of the work on his truck as possible with the help of some close friends, so he did it slowly but surely while still driving his truck. Renting small garages to do the work, since he lives in a small apartment with no garage, is one of the things that he mentioned when asked why it took him so long to finally complete the truck of his dreams. But sticking to his guns and relying on some good friends he was able to finally realize his dream and turn a completely stock ’96 Toyota Hilux into the daily driven masterpiece you see here.
We definitely need more guys like Akira Tanaka and the rest of his crew from his Dainty Rasp car club in our mini-truck community. They are the epitome of respect and dedication and they practice what they preach. Akira had this to say to us: “I am wanting to tell you that it is still unbelievable that my truck will be in U.S. Truckin magazine; it is like a dream! I would like to express my deepest gratitude to all those who made this possible.” Stay tuned for our next adventure overseas to see more of the custom truck culture from around the globe!