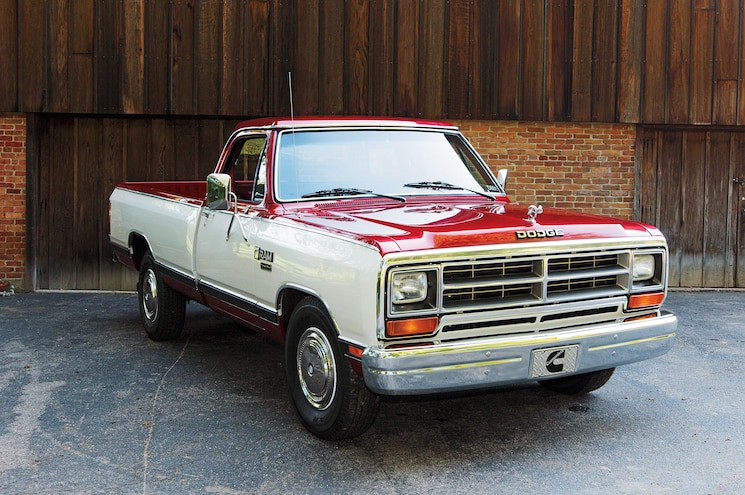 The relationship between Chrysler and Cummins is one that has a rich history -- and it all began with a simple 1985 Dodge Ram D350 Prospector. This two-wheeldrive, single-cab, longbed pickup started its life with a gasoline V-8 engine, and no one knew when it was built that it was destined for greatness. Once in the capable hands of the engineers and mechanics at Cummins, the original powertrain was tossed aside in favor of a 12-valve, rotary-pumped, inline-six diesel engine. The rest is, as they say, history.
If you wanted to buy a diesel pickup in the early-to-mid-1980s, the options were pretty slim. You either got a Chevy or GMC with a naturally aspirated indirect-injection 6.2L V-8 that labored to produce 130 to 143 hp and 240 to 257 lb-ft of torque or -- if you were a Ford fan -- you could have an International Harvester -- sourced 6.9L V-8 that made 170 hp with 315 to 338 lb-ft of torque. However, if you were looking to do some heavy hauling, it was far more likely that a big-block gasser was the truck choice. “What about Dodge?” you ask? At the time, it was sitting on the bench all alone, with no diesel or big-block gas engine options to speak of.
Correspondence between Chrysler and Cummins began as early as 1983. In 1984, Cummins delivered a nonworking mock-up engine to Chrysler for its engineers to test fit, and shortly thereafter the truck now known as D001 arrived in Columbus, Indiana, for Cummins to install a running version of its 6BT engine. Fitting the diesel engine was no small task. The radiator had to be moved forward 4 inches, the fuel system was completely changed, a stronger drivetrain was installed to handle the increased torque, a heavier front suspension was put in place to support the added weight, and the list goes on. Cummins had the first of the original six prototypes repowered by May 1985, and five of the six running by October. 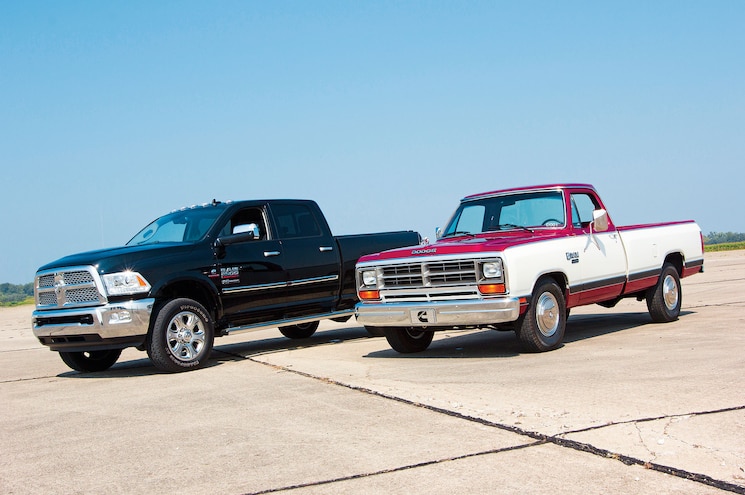 View Photo Gallery | 17 Photos
Photo 2/17   |   Ram and Cummins have enjoyed a partnership that has lasted more than 30 years with no end in sight. Both engine and vehicle technology have come a long way since the first inline-six diesel was shoehorned into an 1985 Dodge Ram D350. The 2014 model year marks the 25th anniversary of when the first Cummins-powered Ram was offered to the public in 1989.
Unlike many of today’s prototype vehicles, which are often sent off to an untimely end at the hands of a crusher, D001 and many of the other original mules lived on long after their projects had concluded. For more than 20 years, D001 was used as a parts runner among Cummins facilities and as a shop truck for the Cummins Technical Center. Most of its life has been spent roaming the highways in and around Columbus, Indiana. While a few of the original six mules have left the company through various means (a couple of the trucks were sold and one was stolen), the original has remained.
After sitting idle in the courtyard of a Cummins facility, the decision was made in 2012 to restore D001 to better-thannew condition with a full, frame-off restoration. When the Cummins restoration team first met, it had been more than five years since the original development truck had ran. A new battery was installed, and with the tank full of old diesel fuel, the truck fired on command, true to form for a first-gen. The decision was made early on not to touch the internals of the engine, only to clean and dress the exterior with new paint and accessories.
Cummins employees Thomas Sallee and William Crawhorn completed the majority of the restoration. Jared Combs, Joshua Barringer, and Dale Wemmer also pitched in at various times throughout the project. To restore the body and interior, these guys spent countless hours tearing the truck down to the frame, which was then sandblasted, primed, and painted. Next, the suspension and steering were completely rebuilt, and the cleaned-up engine and transmission were dropped into the frame. While the chassis and drivetrain work were underway, the cab and bed were also being restored to mint condition. 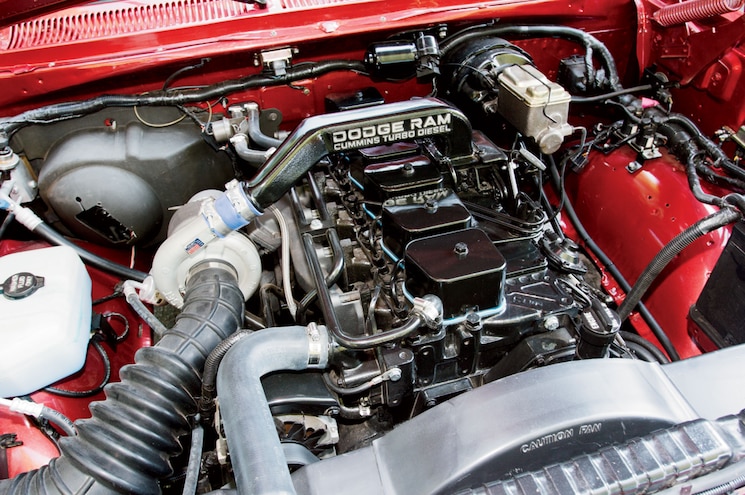 View Photo Gallery | 17 Photos
Photo 6/17   |   While not the original prototype engine (at least two were removed for various reasons early in testing), what is seen in the truck today is still of 1985 vintage. The restoration crew decided to leave the engine’s internal parts alone (as it was running fine) and instead focused on cleaning up the exterior. The block and accessories received a fresh coat of paint and new accessories, such as an alternator, A/C pump, and starter.
As the project progressed, the cab was placed on the completed chassis, and the dash, heating, and cooling components were attached. Body and paint work were completed by Rich Ferrenberg, the headliner and bench seat were upholstered by Kelley’s Auto Interiors, and Dennis Barnett of Classic Molding Restoration cleaned and polished the original exterior trim pieces and hub caps. After a year of hard work, the fully restored 1985 Dodge Ram D350 Prospector made its public debut in June 2013 at the Turbo Diesel Register’s annual rally.
Driving this beauty is like taking a step back in time. And with less than 500 miles on its odometer since the restoration was completed, we were very fortunate to be given a chance to get behind the wheel. When the production turbodiesel Ram made its public debut in 1989, the engine’s performance rating was a then-impressive 160 hp with 400 lb-ft of torque -- less than half of what the output for a Cummins-powered Ram is now, 25 years later. However, despite this fact, the little red-and-white pickup gets out of its own way in a decent hurry and can still burn rubber with the best of them.
The engine is a bit louder and less refined than its younger brethren, but that’s what we love about 12-valves. Going down the road, we noticed the front suspension seemed a bit soft, just how people liked it in the 1980s. Overall, there’s not a single thing we dislike about this wonderful truck, and the most difficult part of all was giving the keys back to its rightful owner.
At the end of the day, it’s quite refreshing to know there is a company out there that takes pride in its history. Cummins’ restoration of D001 shows it not only cares about its past as a company but also the relationship it has built over the past 30 years with Chrysler and Ram. Cummins can be proud of the care that went into the restoration of this important artifact. This truck was the genesis of the Cummins-Chrysler partnership and truly is a living legend. 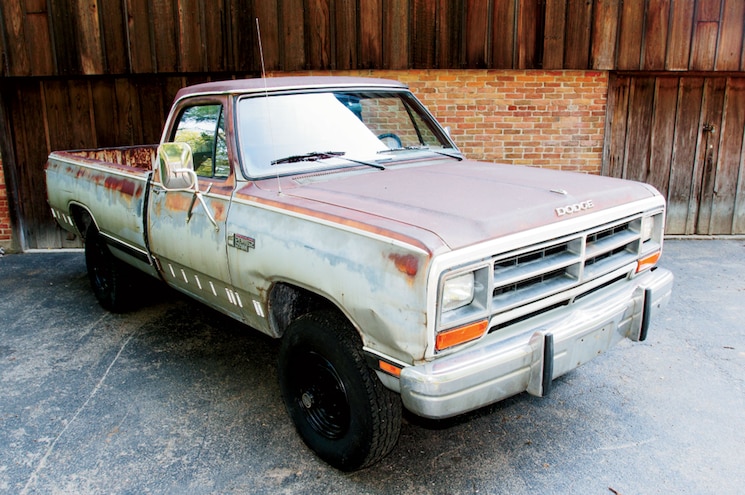 After D001, came D002 -- an 1985 Dodge Ram W350 4x4. Much like the first test rig, this truck spent its life working as a parts runner and shop truck and occasionally got tasked with moving duties when an employee was in need of a pickup. The truck was parked in 2008 in the basement of a Cummins facility in Columbus, Indiana. Not having the best luck, the truck spent three days partially submerged when the White River crested its banks and flooded the basement storage facility. It remained mothballed until the week before our visit, requiring only a can of wasp spray and a new starter to bring it back to life. Even after sitting idle for so many years, this truck fired right to life and drove like nothing had ever happened. 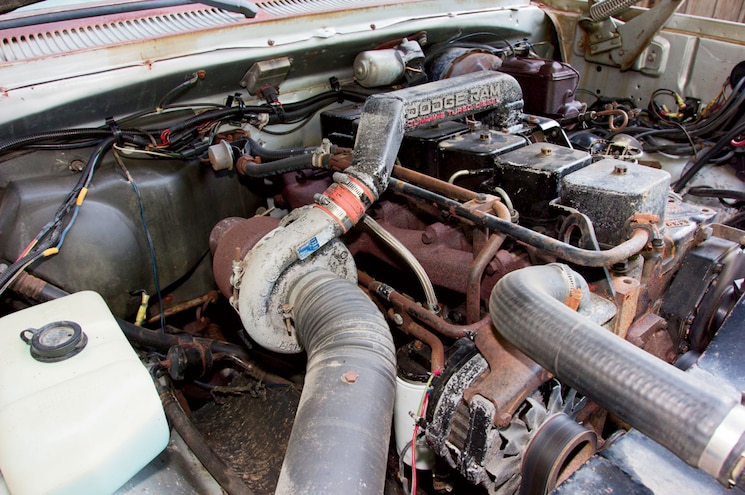 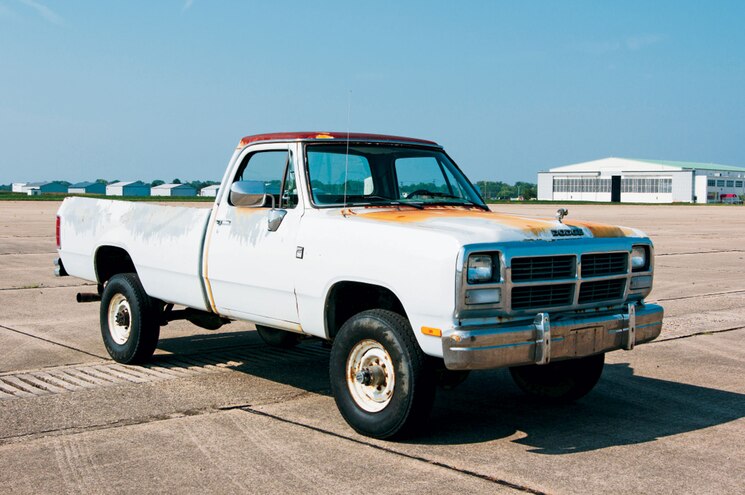 The D006 mule is an ’89 Dodge Ram W350 4x4 and has lived a very similar life to D002. This truck is the first to ever be equipped with a charge-air cooler (intercooler) and Bosch P7100 injection pump. 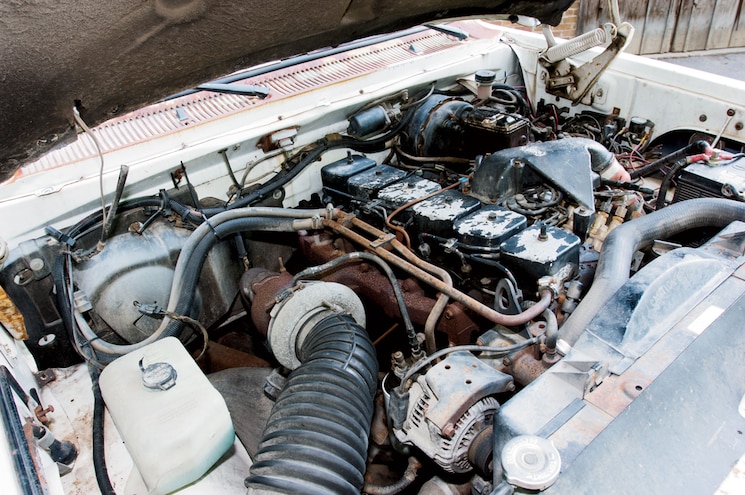 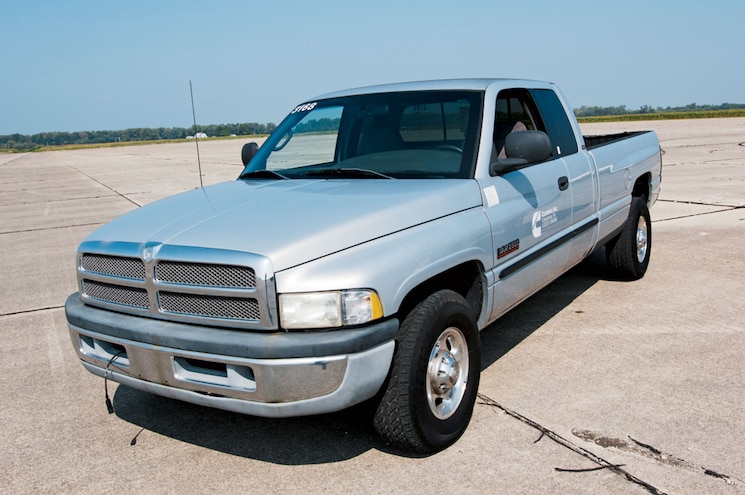 High-pressure, common-rail fuel injection was introduced on 2003 model year engines, but the first truck to receive such treatment was this 2001 Dodge Ram 2500. This two-wheel-drive SLT extended-cab longbed second-generation pickup really gets with it when you apply pressure to the skinny pedal thanks to 325 hp and 610 lb-ft of torque. Those are the factory output numbers; really, there’s no telling what levels the guys at Cummins have tuned this particular specimen up to. 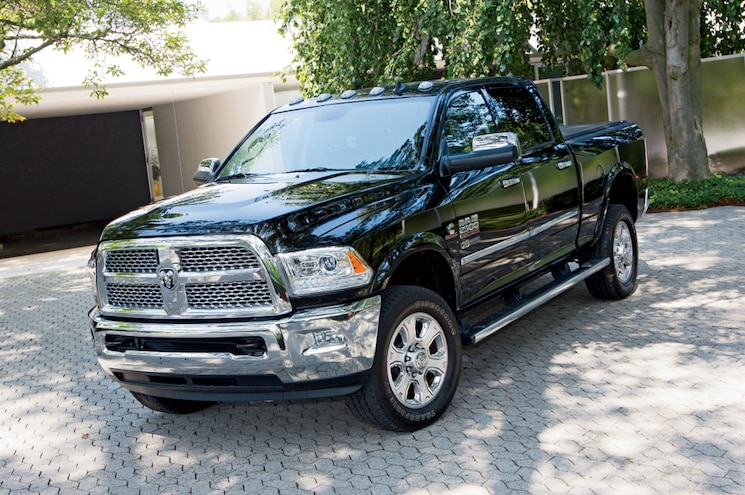 To commemorate the 25th anniversary of the Cummins turbodiesel engine being offered in the Ram Heavy Duty truck lineup, Cummins has teamed up with the Turbo Diesel Register and Geno’s Garage to offer a special 25th Anniversary upfit package for 2014 Ram 2500 and 3500s. 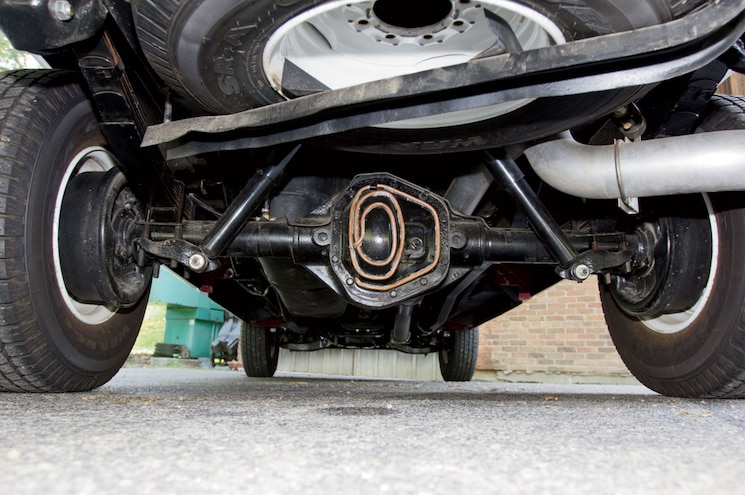 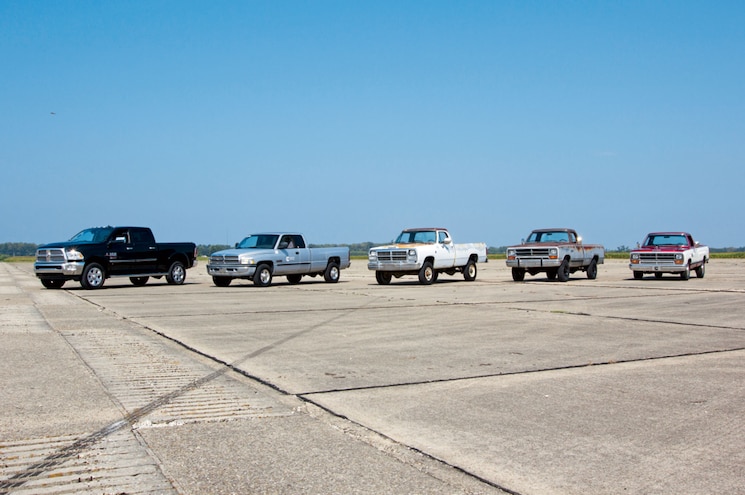