You always remember your first 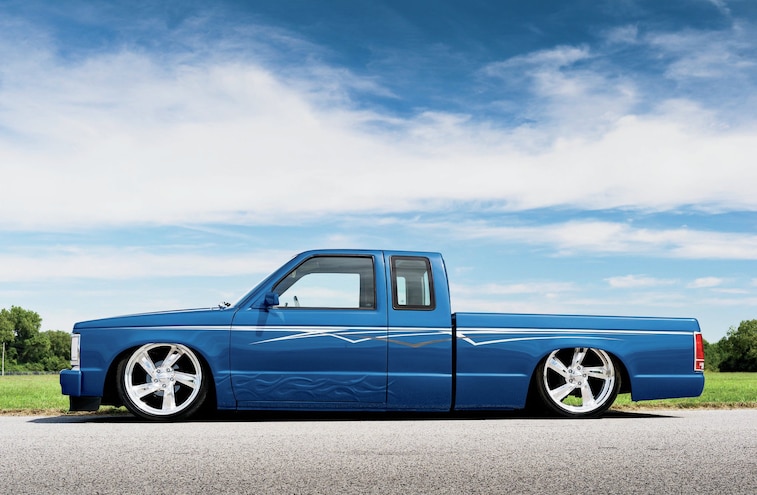 In a small town in Iowa, Justin Graber found himself enthralled with the mini-truckin’ lifestyle. As a young boy, Justin would watch his dad build and show custom trucks in the 1970s. This set the tone for Justin’s way of life as he grew up into a teenager deciding on his first vehicle. Choosing what to purchase was not hard; he had always had an eye for the first-gen S-10 pickups.
Soon a 1988 extended cab was purchased and Justin went right into giving it a proper stance with a 4-inch static drop and some looks with custom blue base paint wrapped in graphics around the entire truck. A set of 17-inch wheels replaced the stock rollers. 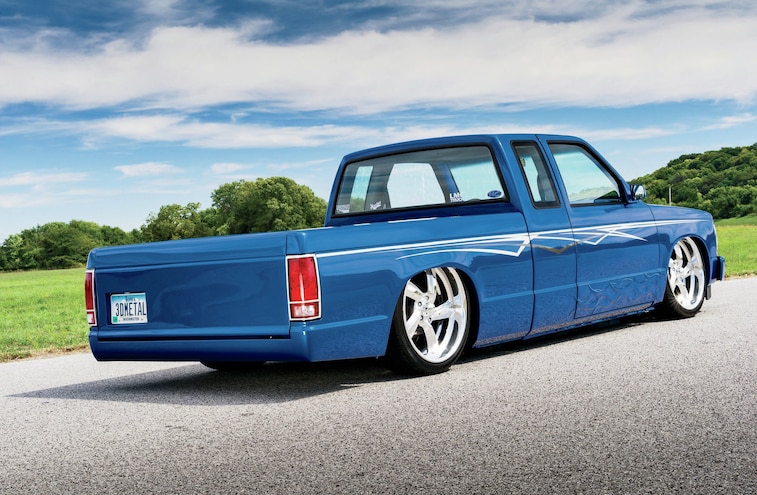 View Photo Gallery | 7 Photos
Photo 2/7   |   1988 Chevrolet S 10 Pickup Rear View
While Justin was cruising the local strip he was involved in an accident that caused his beloved S-10 to get T-boned. After hauling his truck back home he was given the awful news from his insurance agent that the truck was totaled. Most people receiving this news would just move on and go buy another vehicle, but not Justin. His love for this S-10 did not let him give up on it, and he purchased it back from the insurance company to bring his truck back to life stronger and better than ever.
Justin’s truck went under the knife by installing a set of modified stock upper and lower control arms up front. Out back a triangulated four-link replaced the factory leaf springs. Firestone airbags and ½-inch SMC valves connected to ⅜-inch stainless steel hard line was hooked up to a Chassis Tech compressor to power his air-ride setup. Next, 20x8.5 Raceline Explosion 5s were mounted up to some 245/35/20 Hankook tries to complete the updated look. 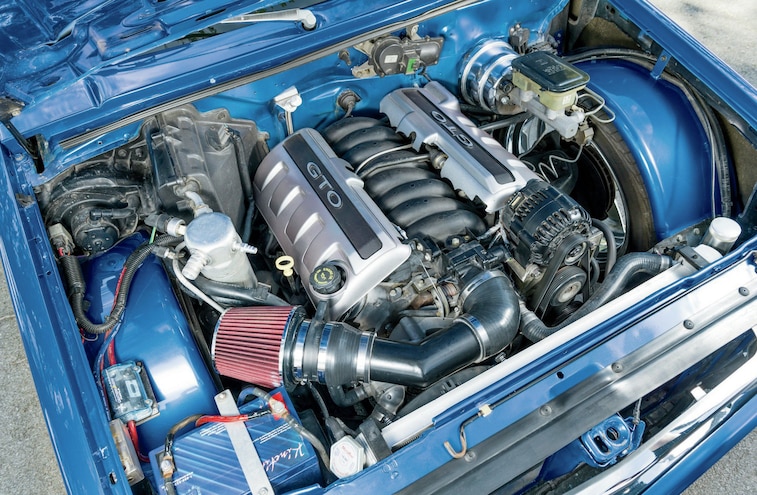 View Photo Gallery | 7 Photos
Photo 3/7   |   1988 Chevrolet S 10 Pickup Engine View
After reading a tech article, Justin began making 3-D metal flames. First, the flames were drawn on a piece of 16-gauge sheetmetal. Next, a plasma cutter was used to cut out the shape of the flames. This would have been good for most, but Justin wanted to give the look a more three-dimensional look, so the edges received treatment from a roller that allowed them to gain some height. The flames were then welded onto the hood and the bottom portion of each door. The door handles, locks, gas door, front bumper, and wiper cowl all received the shaved treatment to clean up the lines. Out back Justin called Grant Kustoms for their roll pan and tailgate skin while the front end received a 1993 GMC S-15 front end swap. Going back into the bed, Justin gave the bed floor a little something different by keeping the bed floor ribs over the notch. With the aid of his friend Blaine Gill, the truck was primed before it received a beautiful DuPont Starry Blue coat of paint. Jim Hetzler of Hetzler Studio was called in to lay down the graphics that KP Concepts had designed.
While his truck was down, the original 2.8L V-6 was pulled and replaced with a healthy LS3 transplant. This task didn’t go so easy though; Justin had to make his own wire harness, which took about three weeks to complete. Believe it or not, it started on its first try and was sweet music to his ears.
To match the massive changes to the exterior, Justin moved inside and reworked some Honda Civic seats, re-covering them in light and dark gray leather. All the interior trim pieces were either painted or wrapped in gray leather. The factory dash was smoothed and painted, and the stock steering was replaced with a B.A.D. Wrath half-wrap wheel. Quinn Nissen handled the audio install, and between the seats is a custom fiberglass console that houses the Alpine 12-disc changer, airbag switches, and Alpine alarm display. Behind the seats now resides a fiberglass enclosure that houses three Xtant 12-inch subs and a floating amp rack for the Xtant amps. The 6½-inch Focal components now reside in the factory door panels, which have been modified with 3-D flames on the lower portion of the door panels to keep the flow of the overall design throughout the truck.
For the last 10 years Justin has seen his beloved S-10 go through some major changes and he could not be more pleased to still have it with him. He would like to thank his parents for all their support and garage space to build his gem, his wife and daughter for all their patience and understanding during all those long nights working on the truck, and a big thanks to all of his Negative Camber family; Justin could not have done this without you.