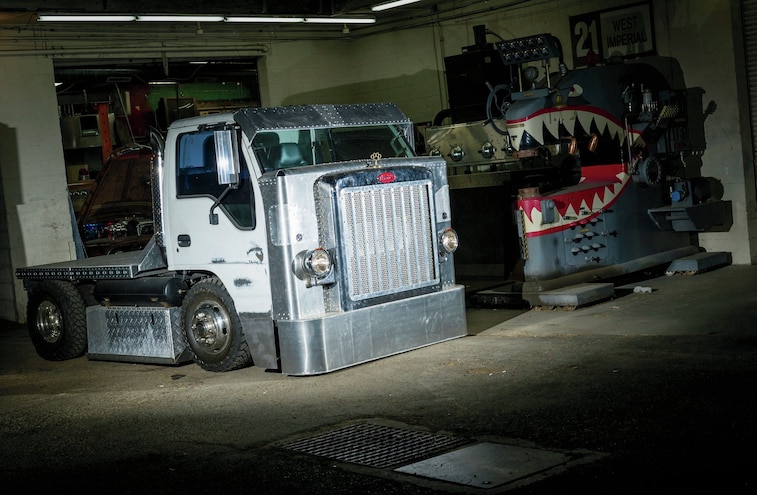 Everyone’s gotta go to work. Unless daddy’s fat pockets are deep enough to mooch from for the rest of your life. If that’s the case, well, good for you. The rest of us schlubs are in for a lifetime of backbreaking, brainwashing labor but we’ll always make sure to take the time to talk about you and curse you behind your back. Don’t be mad, bro. It’s just what hard working, blue-collar ’Muricans do.
In any event, this Isuzu NPR work truck belongs to a guy who has purposely tucked himself into an unseen corner somewhere just beyond the glow of the Vegas strip lights. Finding him was purely accidental and unplanned, which made the encounter all the more fateful -- eerily fateful. Just after nightfall in the city of a trillion sins as we were looking for a gritty spot to snap a few pics, we heard the sound of metalworking in no-so-far-off distance. What we stumbled across was no multi-million-dollar illegal chop shop, but a humble little shop stuffed full of kooky trucks, and a retractable metal bed dangling from the ceiling, and some other stuff that really caught our eye. The interesting sleeping quarters and this mini semi truck looking thing were enough, however, to keep the peepers from peeping anywhere else.

"The rest of us schlubs are in for a lifetime of backbreaking, brainwashing labor …" View Photo Gallery | 8 Photos
Photo 2/8   |   2001 Isuzu NPR Dash
Gabriel, the dude who works and possibly resides in this cave of coolness, was surprisingly welcoming considering we were a group of 10 with an arsenal of photo gear. Upon questioning his reasoning for creating such a beastly vehicle, he told us, “I just needed a good work horse that could do everything my 1999 F-150 couldn’t. I also made a list of things I hated about driving my long, tall Ford and made sure none of those things were a part of my new build.”
In just a year’s time, this workingman fabricated a piece of machinery that met his specs down to its appearance. “I got the truck from a guy who said the motor was toast. I was able to get it running again without much of a headache. I scored there. I ditched the box bed, cut the frame down, build the rear suspension, and modified the front. The rest of the recipe for a badass truck was easy -- add obnoxiously loud air horns, get rid of the old ugly front grille, piss off the cops. It’s been fun, and this thing turns on a dime too!”
For those who say the working class man is a sucker -- suck on this. Gabriel bought and built this Isuzu NPR without going over a budget of 10 Gs. But just like with everything else, there’s always an aftershock (even if just a minor shake) that accompanies a windfall. “During the build time, I broke up with a girlfriend, lost a tooth, and got to experience the worst death wobble ever before I got the front suspension and steering dialed in.” In hindsight, things could be worse.
Special Thanks From Owner
“I would like to thank all the homeless guys who didn’t try to steal my aluminum bed for scrap metal. Also a shout out to my upstairs neighbor who constantly reminds me how loud my truck is. Oh, and to all those who aren’t afraid to take a perfectly good running vehicle and cut it to sh*t hoping that it will still work when it’s done.”