Sunshine in the Northwest 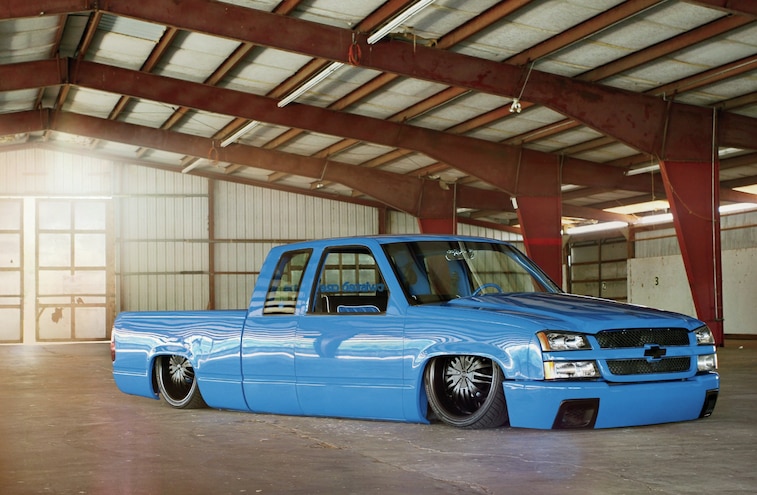 There are two constants in the custom truck world. One, trucks laid flat on the ground are nothing short of amazing, and, two, nicknames. That’s right—nicknames. This amazingly modded ’94 Chevy you see featured here is owned by Erwin “Werm” Hahn. Not only is Werm the proud owner and builder of this beautiful creation, but he also wears the nickname in honor of the traditions of his fellow slammed brethren from his truck club, Twisted Creations.
That’s another great tradition in the tight-knit community of custom truck fanatics: truck clubs. With truck clubs inevitably comes a nickname, either given as a loving token or gesture of friendship—or simply because your drunk club buddies are tired of calling you names like Billy, Erwin, Mike, Randal, and John. Once said nickname is given and it sticks, yup, you’re pretty much stuck with it. So Werm, a proud member of Twisted Creations, surely lives up to this time-honored tradition and wears his badge proudly.
Werm has been in the process of building his dream truck for the last seven years. Wanting to do as much of the work himself as possible, he slowly cut his teeth learning the tricks of the trade along the way. Welding, grinding, bodywork, sanding until his fingers bled, he truly poured his heart and soul into his ’94 CK until he was finally proud of what he had created. 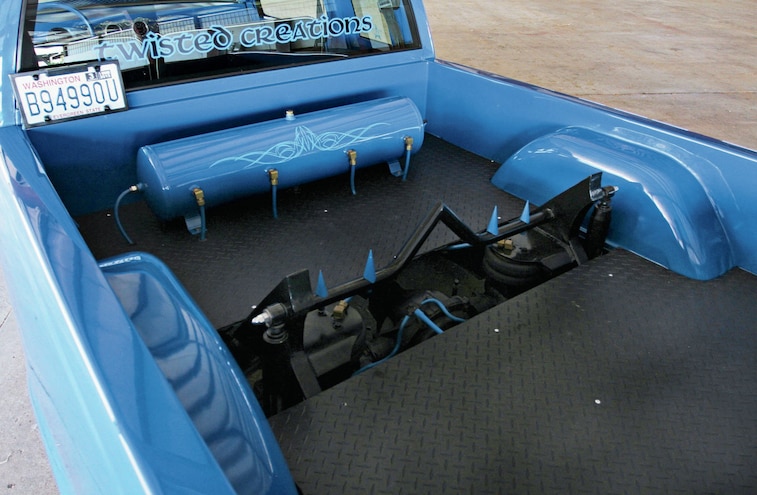 View Photo Gallery | 9 Photos
Photo 2/9   |   1994 Chevy C1500 Bed
Wanting something truly unique, Werm took a complete ’04 Silverado front end and grafted metal until it was a seamless fit. Not able to stop there, he wanted to continue the subtle surgery that makes his truck standout from the rest. He shaved the door handles, antenna, gas door, and every factory annoyance there was, yet something still wasn’t quite right in the proportion department. Werm measured and measured and began to cut 2.5 inches out of the longbed to give it a truly custom look and feel. This was the definite touch that would make this truck just different enough to stand out, yet the irony is that very few people would even notice the mod. Perfectly executed, Werm was now proud to see his truck ’bagged, bodied, and sporting body mods galore. The finishing touch on the bed was grafting the Colorado taillights to flow seamlessly with the body lines.
Although the body mods happen to be Werm’s favorite part of the build, he also mentioned that his truck was built to drive! The weather in the Northwest isn’t always the friendliest to lowered vehicles, but Werm built a reliable 350 engine, an air suspension system that would withstand whatever he could throw at it, and coated the truck with PPG Mariner Blue to protect it from the elements. So after six long years, with some trips in between (and, of course, life’s curveballs), he could finally enjoy the fruits of his labor. His club mates also gave him a hand along the way. The main motivation to see this build through to the finish—besides for driving one killer-bodied Chevy—was to have something he could be proud to show alongside his club mates.
Cruising and showing with his buds, Werm is a fine example of what makes the custom truck community such an amazing group of friends and family. His crew and everyone else in the Northwest show that community, hospitality, and respect is alive and well in the truck scene. We can’t wait for our next trip up that way to check out some more killer rides! 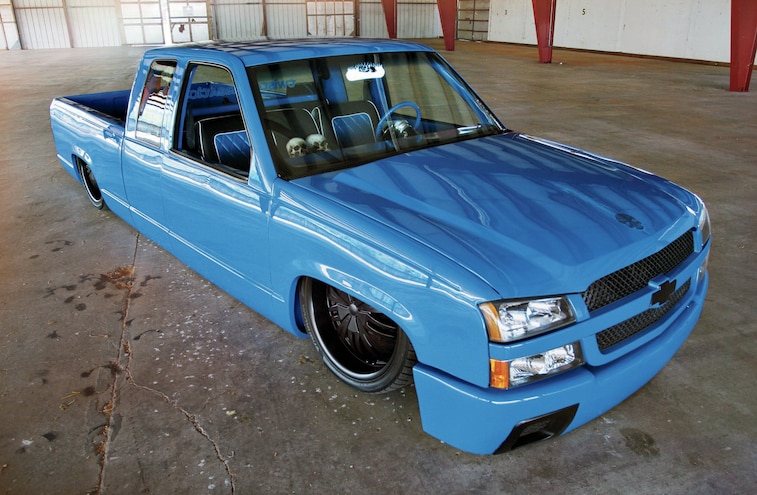 Truckin
Truckin
Busted Knuckles - 1997 Chevy C1500
This installment of Busted Knuckles features a 1997 Chevy C1500 built by Dylan Dirickson.
Grant Cox – Jan 18, 2016
Truckin
Truckin
1989 Chevy C 1500 - Engineered to Win
We wanted to do something a little different for this special feature, so rather than interviewing a...
Mike Alexander – Jan 26, 2015
Truckin
Truckin
1994 Chevrolet Silverado 455ci Big-block - Korrupted
Chad Moline, of Rock Falls, Illinois, elected to use a 455ci Oldsmobile big-block for his 1994 Chevr...
Patrick McCarthy – May 28, 2014
Truckin
Truckin
Truckin` Magazine THROWDOWN At LS Fest 2013
We selected 12 lucky guys to bring their trucks out and compete at THROWDOWN LS Fest 2013. The only ...
Maxwell Matthewson – Apr 18, 2014
Join Our FREE Truck Trend Network Newsletter