A Shop Truck That's At Home On The Strip And Street 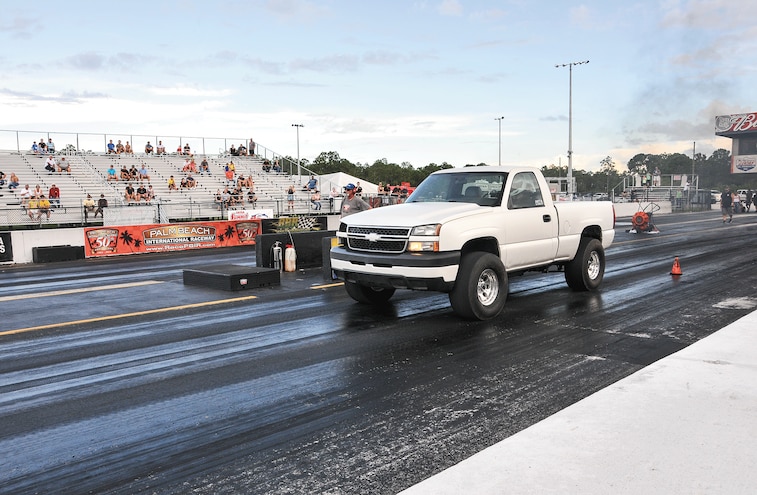 If you’ve been shopping for a truck lately, you know manufacturers go to great lengths to give you an endless variety of choices: two-doors, four-doors, regular cabs, extended cabs, crew cabs, longbeds, and shortbeds combined with multiple powertrains and dozens of interior and exterior options. Every now and then, however, there is the urge to create something unique.
That was the approach Adam Pela took when it came to his ’06 Chevy Silverado 2500HD. As the owner of Pela Motorsports, Adam is a mechanical design engineer by day and a performance guru after-hours, specializing in the Duramax. His vehicles have appeared in our sister magazine 8-Lug, as they combine good looks with Adam’s trademark techniques of squeezing out considerable extra power.
Adam knew that from a business standpoint, nothing better displays your talents than your own shop truck, so he decided to combine the best of both worlds, via the purpose-built Silverado you see here. The Chevy’s transformation took six months, resulting in a regular cab shortbed with an engine potent enough to make it a dragstrip screamer and reliable enough to be an air-conditioned daily driver in his hometown of Jupiter, Florida. 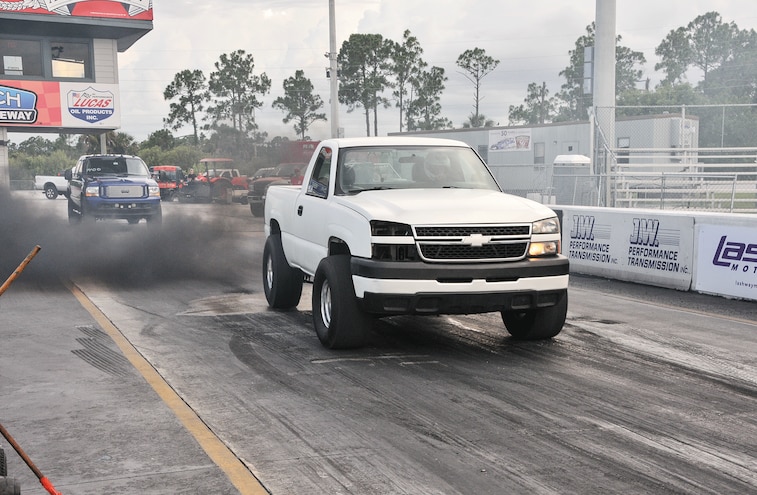 View Photo Gallery | 19 Photos
Photo 2/19   |   The passenger-side headlight on the ’06 Silverado is removed at the strip to allow increased airflow to the compound-turbo setup. It goes back in for highway use. The shortened Silverado sports a flat pearl wrap finish.
Performance is always high on the list, and the engine upgrades began with a .020-inch overbore of the factory LBZ block. The balanced factory crank uses Carillo connecting rods, delipped LML pistons, Clevite bearings, and a SunCoast billet flywheel. ARP head studs and main studs keepeverything securely in place. Aspiration modifications began with a custom compound-turbo package from Pusher Intakes that uses a Garrett PowerMax GT4094 turbocharger as the primary. Adam chose the Stage 2 version for its larger compressor trim as well as the larger GT40 turbine wheel and vanes over the Stage 1 unit. It’s paired with a BorgWarner/Airwerks S475 T6 turbocharger with an 88mm compressor wheel. Fuel needs are met with 100-percent-over nozzles built by Exergy Performance, augmented with a Nitrous Express 150hp kit and a Sinister Diesel billet fuel sump. The nitrous is used more for cooling at the end of the track than for additional horsepower.
Exhaust upgrades include PPE manifolds and up-pipes feeding a 4-inch-diameter exhaust with no muffler. An Edge Insight CTS monitors vital engine functions while Adam’s EFILive tuning controls the engine and transmission. Handling the estimated 800 hp is an ’06 Allison 1000 transmission using a SunCoast 1055 torque converter reworked by transmission guru Dmitri Millard. 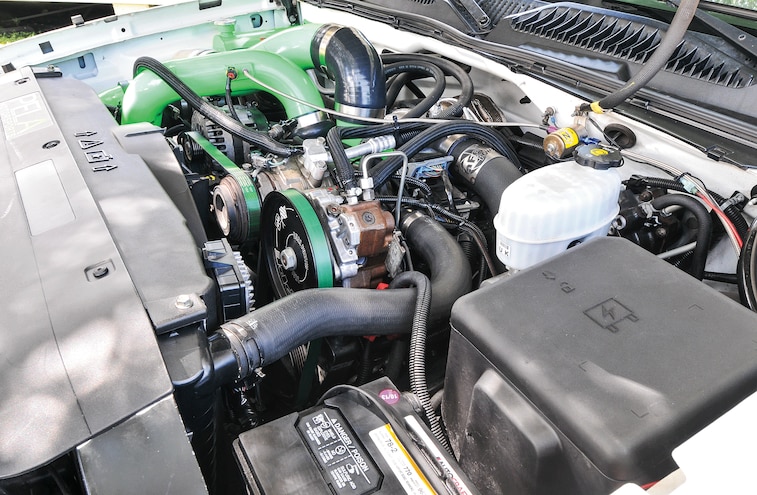 View Photo Gallery | 19 Photos
Photo 3/19   |   The LBZ engine benefits from a compound-turbo setup, custom 4-inch-diameter exhaust, and an Allison 1000 transmission with SunCoast converter.
Putting the mega-motor aside, Adam began work on the chassis. Since the factory didn’t make a regular cab shortbed, Adam began the personalization process by creating his own. He cut the frame down to match the factory wheelbase of a regular cab shortbed, using factory brackets and hardware for a GM shortbed truck. The reinforced rails now hold a modified suspension setup beginning with a factory AAM 11.5-inch rear axle fitted with a welded rear differential and 3.73 gears.
The overload springs were removed and the new CalTracs traction bars and Bilstein shocks help to plant the power. Up front, the factory GM 9.25-inch independent front suspension was fitted with an Eaton ELocker and matching 3.73 gears. The axle is supported by Cognito upper control arms and Bilstein shocks, with Rare Parts G2 HD tie rods ensuring responsive steering. Cross-drilled brake rotors guarantee quick stopping power while the floor-shifted transfer case directs power to all four wheels. The truck runs on 16x10-inch Mickey Thompson wheels with four 33x10.50R16 Mickey Thompson slicks on the strip. All that was left was assembly and cosmetics, with Adam choosing a flat pearl wrap for the exterior.
The stock factory interior works just fine and will probably be refreshed sometime in the future. Adam now has a truck with the ability to perform as a regular driver during the week and a track day missile on weekends. We photographed the truck at Palm Beach International Raceway in Jupiter, Florida, where the 5,500-pound truck (estimated) turned 10.6-second times at 129 mph in the quarter-mile. Adam drove the air-conditioned Chevy to the track and home, proving that with the right mix of parts and skill, you really can have the best of both worlds! 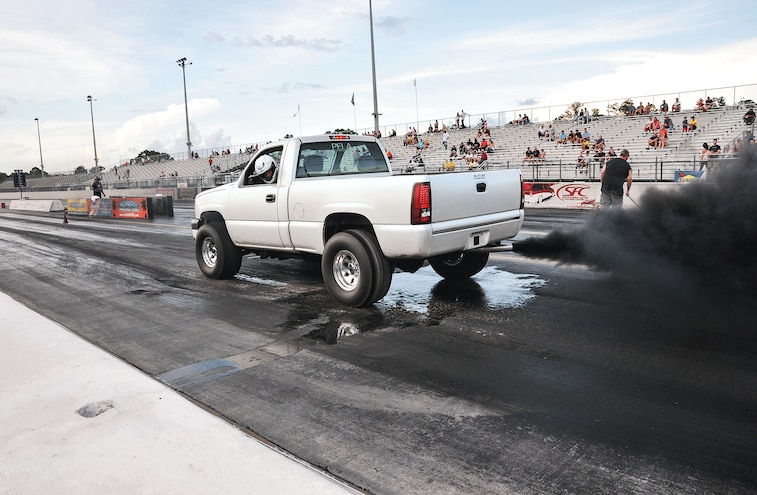