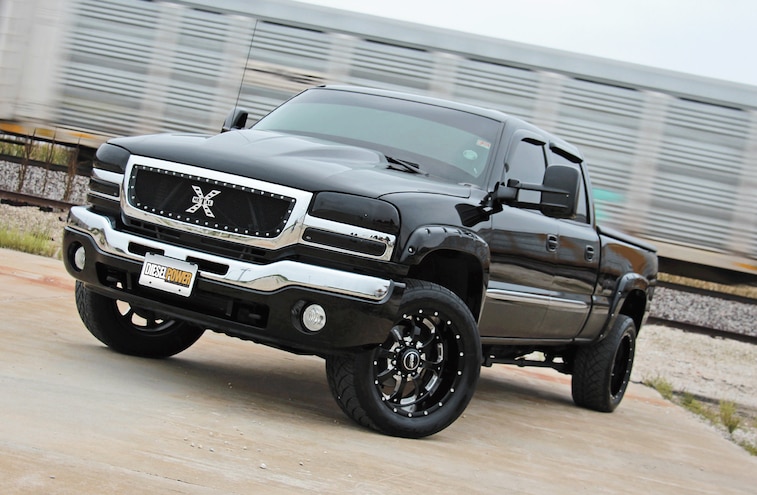 For a lot of us, the diesel addiction came naturally. For others, it developed over time. John Zibutis, a former minitruck and street-bike enthusiast, fell into the latter category. He started to take an interest in diesel trucks roughly eight years ago, when oil burners began to explode with popularity. “I got into diesels once the trucks rode better, actually made power, and GM built an engine that didn’t have a ton of problems,” he told us. He then quickly added, “But I never thought I would go this far with my Duramax.”
Believe it or not, the ’06 GMC Sierra 2500HD you see before you was pampered the first 36,000 miles of its life, and John’s father was its second owner. But after his father lost his bout with cancer in 2008, the keys were left to John—so it goes without saying that there is a lot of sentimental value involved with this ultra-clean GMC.
While an Edge Juice with Attitude programmer (uploaded with the Hot Unlock tune, of course) proved fun and put the truck at the 460hp level at the rear wheels, John wanted more out of his GMC’s 6.6L LBZ engine. Taking the advice of his friends, he bit the bullet and tackled the unavoidable job of fortifying the Allison 1000 automatic transmission before adding big power. For the bulletproof build, he took the truck to Flynn’s Shop in Alexander, Illinois, where the six-speed automatic was fitted with a GMax 6-pac clutch kit, a TransGo shift kit, and a 1058 torque converter from SunCoast. For added insurance, a pump rub kit and transfer case brace from Merchant Automotive were also installed. 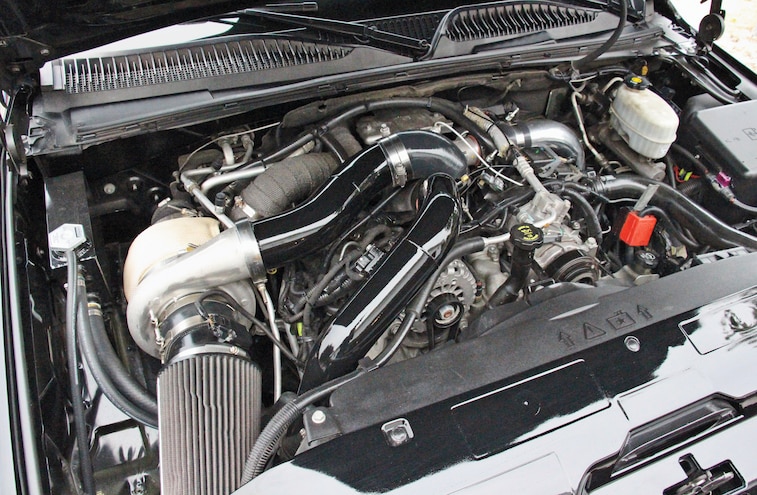 View Photo Gallery | 15 Photos
Photo 2/15   |   The 6.6L LBZ Duramax resting in John Zibutis’ ’06 GMC Sierra is far from stock. A Fleece Performance Engineering short-block houses forged-steel Carrillo rods, Mahle cast-aluminum (and coated) 16.5:1 compression pistons, and a SoCal Diesel 3388 cam. Top end mods were performed by Flynn’s Shop, where double-spring valvesprings from Diesel Technology Source and Custom Age ARP head studs were utilized.
With the slushbox complete, it was full steam ahead on the engine. A set of Exergy Engineering injectors with 60-percent-over nozzles replaced the stockers, the factory CP3 injection pump was pulled and transformed into a 10mm stroker pump at Motorsport Diesel, and a 68mm Cheetah turbocharger from Fleece Performance Engineering was added. ARP 2000 head studs would also be threaded in one at a time to keep the heads from lifting.
Knowing he was playing with fire at the 650hp mark (where the LBZ’s factory pistons are known to crack), John pressed on, adding a stock-over-S475 twin-turbo kit from Duramaxtuner.com. A few thousand miles later, theinevitable occurred: a cylinder misfire and white smoke billowing from the tailpipe. However, instead of throwing in the towel, John decided to go all out and contacted Fleece Performance for a built short-block. The competition-ready bottom end consists of Carrillo rods, Mahle coated pistons, and a SoCal Diesel camshaft. The cam, crankshaft, and water pump are all keyed. Flynn’s Shop took over the assembly from there, fitting the heads with Diesel Technology Source valvesprings and securing them to the block with Custom Age ARP studs.