Using the Family and Friends Plan 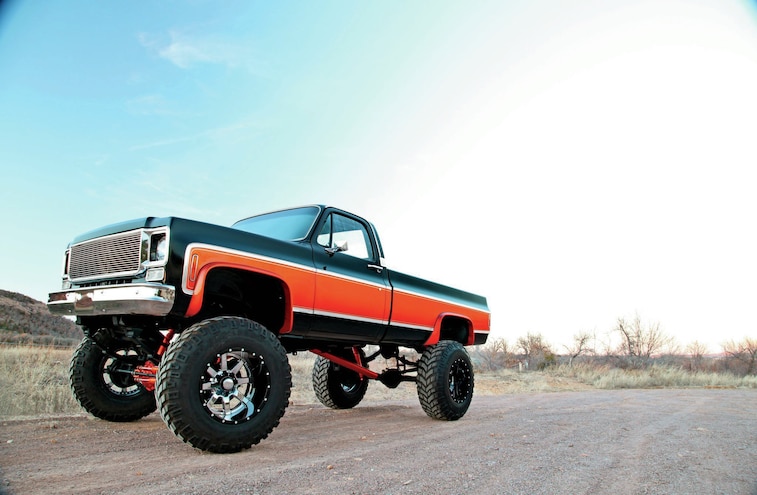 DIY is a term that gets casually thrown around lately. It can range from putting on a new doorknob, fixing a couple of loose shingles, maybe going as far as messing with the plumbing before you call a professional. In the truck world, owners pride themselves on doing their own maintenance, making a small upgrade or two, or even tackling a leaking water pump. But Cody Hill took on the build of his ’75 K10 and changed do-it-yourself, to made-it-himself with most of the work being performed by him in a 30x50-foot work shed in the backyard of his parents’ place.
As a self-employed construction worker running a Caterpillar D-5 ’dozer, Cody is used to figuring things out and not having to call out a service guy or technician; he is the guy who gets called. It’s a testament to putting an idea into practice and being able to do exactly what he wanted by doing all the work himself.
Cody also got some help from his friends as they took the C/K and transformed it into the beast you see here. Cody’s father Clyde bought the truck new in ’75 and was a gearhead himself as he always had a hot rod or a race boat to keep him busy. See, it was Clyde who came up with the paint scheme back in the day so when Cody decided to take on this project, he repainted it the exact colors his dad used. Only a few years out of high school, Cody decided to take the truck that he learned to drive in and give it the proper treatment as well as add a few touches that represented him. 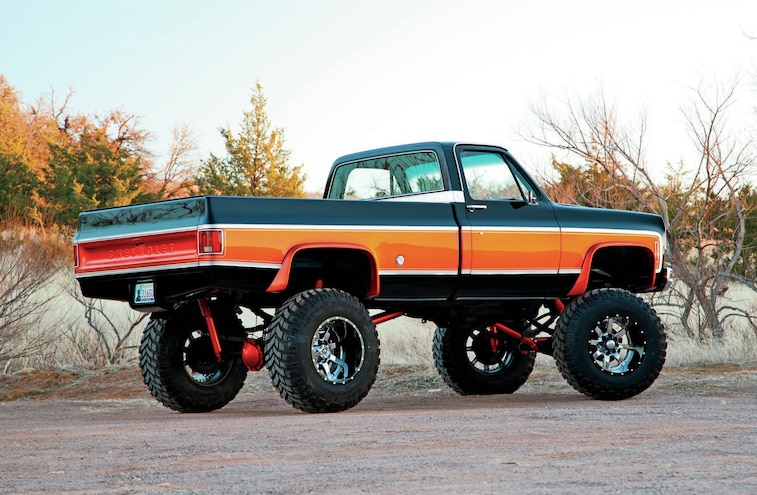 View Photo Gallery | 8 Photos
Photo 2/8   |   1975 Chevrolet C K10 Rear Side View
First the truck was dragged out back of his parents’ house (his father still owned the truck after all) and was set to work on in the shed. Cody and his friends blew the truck apart so it was just a stripped, bare frame, which got coated with bedliner material. All the panels got their rust scraped off and were carried, piece by piece, to Stack Masters body shop in Fletcher, Oklahoma. The guys at Stack’s were nice enough to let Cody hang around a bit and learn enough to do the work himself at his own pace. Since the cab was there too, the decision was made to shave the firewall and give the engine bay that smoothed look. Days went by and time being precious to all, Cody had to run back and forth between the paint shop and the out-building to finish the other details of what was now a pile of parts. The lift was sorted out with a 3-inch body lift and 10-inch suspension kit from Superlift. Then, the front and rear differentials and leaf springs got a coating of black paint, and a four-wheel driveshaft was lengthened by Longhorn Trailer and paint-matched along with the shocks and a few other goodies.
The powerplant got swapped for a ’86 Crate 350 that was outfitted with an Edelbrock carburetor, ceramic-coated Hedman headers, and a custom 3-inch exhaust that was, you guessed it, built by Cody. A K&N filter and Optima battery were added and the engine was done. As the body panels came back piece by piece, the pile got a little smaller, and a truck started to take shape. A 2-inch Goodmark cowl hood was added, so were Bushwacker fender flares, all-new window seals from LMC Truck, and a fiberglass roll pan. The body panels got a generous basecoat of House of Kolor Zenith Gold, with Tangerine Kandy sharing the two-tone treatment with DuPont Chromabase Black. Cody’s father, Clyde, officially signed over the truck to Cody by adding some pinstripes to the now completed exterior. 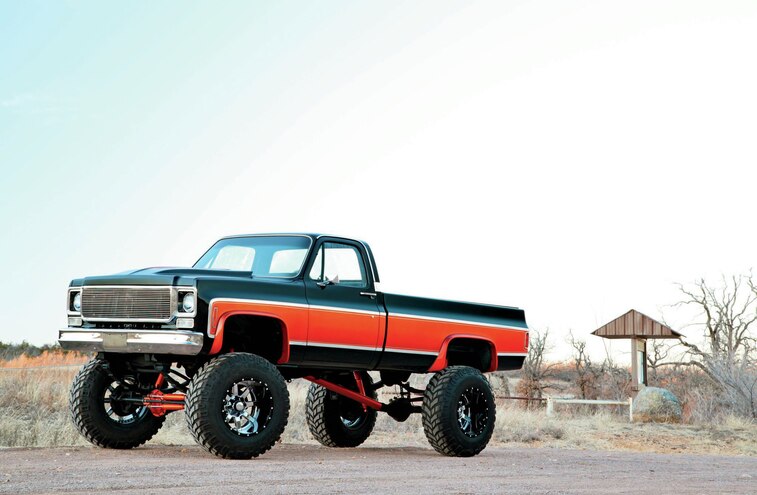 View Photo Gallery | 8 Photos
Photo 3/8   |   1975 Chevrolet C K10 Side View
A custom set of door panels were created by local legend Cleland Staggs at Cleland’s Upholstery and skinned with Ultraleather, and the headliner received the same treatment. The interior was finished off with some billet shine on the window cranks, gear shifter, and pedals. All the audio work was handled by Audio Tech in Lawton, Oklahoma, which installed a Pioneer head unit and a Memphis amp with 6.5-inch mids and 1-inch dome tweeters.
All in all it was family ties and friendships that helped Cody get this truck to where it is today. Cody dedicates this build to his father, Clyde, and Cleland Staggs, who is no longer with us. A big thanks also goes out to his wife, Chelsea, and son, Callan, and to all of his friends who lent a hand in this build. 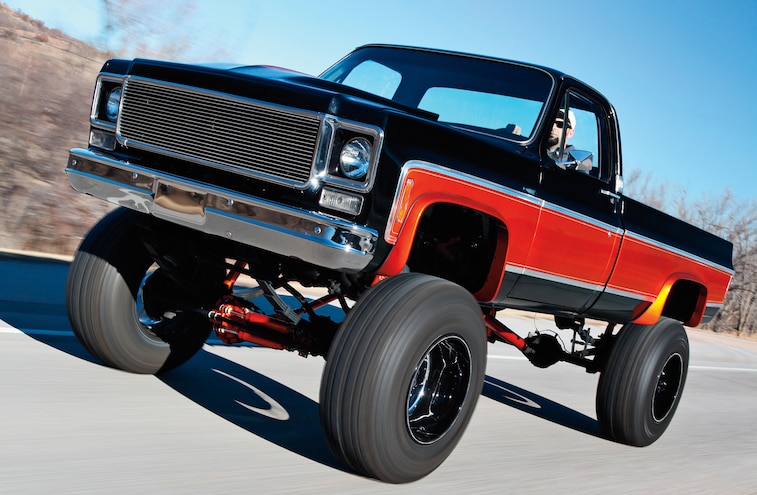 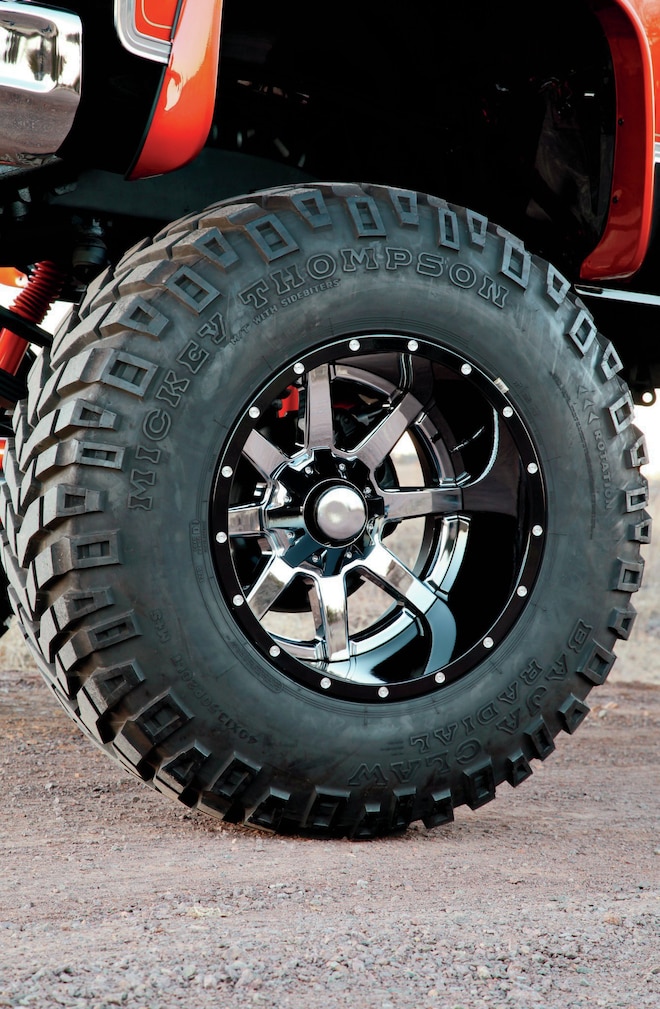