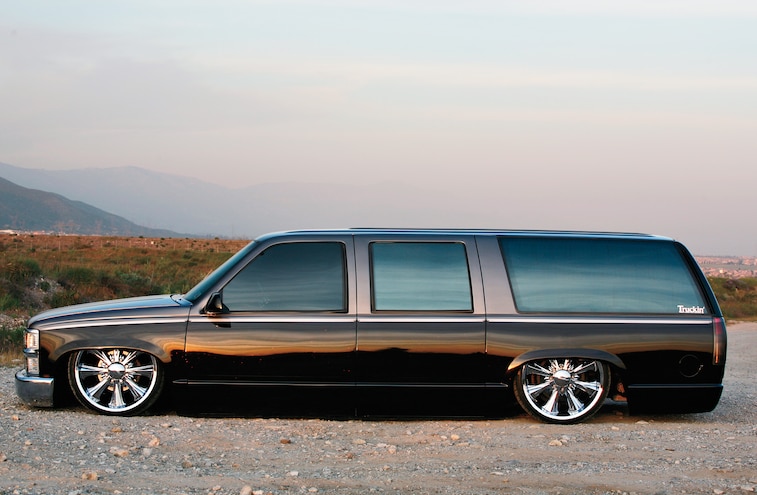 Before we get into the details of this awesome 3/4-ton Suburban we need to get one thing clear: the owner’s name. While it may say Rodolpho on his birth certificate, everyone knows this gentleman as Munchies. Munchies resides in the Inland Empire, Perris, California, to be exact, about 70 miles east of Los Angeles. This area is well known for all kinds of custom vehicles, which is no doubt how Munchies got the bug himself. He started out with a ’bagged fullsize Chevy but he quickly decided he wanted more room. He traded the Chevy for a bone-stock ’93 Suburban 2500.
Going from a custom truck to a stock one did not sit well with Munchies, and he quickly connected with Max Fish of Bio Kustumz. Max got the rig’s frame planted on the ground via custom air suspension front and back. With the truck now cruising lower to the ground, it was time to tackle the stereo. One reason Munchies traded the truck for the roomy Suburban was so he could stuff it with massive amounts of stereo equipment. He opted to go with four Kicker 12s powered by a Clarion mono-block amplifier. He didn’t want the subs to be lonely so they are accompanied by 10 6x9s and four 6.5-inch mids. Four Kinetik 2400 batteries supply the insane amount of power. If you happen to be at the same show as Munchies you can normally find him by following the insanely loud music coming from this beast.

View Photo Gallery | 6 Photos
Photo 2/6   |   1993 Chevy Suburban Font Side View
Munchies now had what he always wanted, a laid-out Suburban that he could cruise around and hit up shows with his truck club No Regrets. The ironic part of this is he had one regret. He would look over at his truck at a show, and it just was not low enough. He got in with a few of his truck club members who had just opened up Abstract Kustoms. They tackled the huge job and got the body of the 2500 firmly planted on the ground. Once it was all welded back up, he had Mike of The Painter Shak lay down a superclean Charcoal Gray roof over the Black Cherry base. The 22-inch Panther Juice wheels wrapped in 255/30/22 Lexani tires are a perfect combo for the Sub. People who see the Suburban at shows scratch their heads when they see the truck is an 8-Lug 2500.
Now that the outside was finished it was time to tackle the final few things to complete Munchies’ ’Burban. The truck breathes a bit better with a K&N intake at one end and a full MagnaFlow cat-back exhaust at the other. The cavernous interior is completely wrapped in custom suede, and a one-piece headliner was built and installed by Jose at Custom Interiors in Perris, California.
Even though at one point early on Munchies’ parents tried to sell his truck without him knowing in order to pay bills, he still thanks them for all their support along with all his extended family in his truck club No Regrets. He would also like to thank Mac’s Springs, Max Fish, Steve Wilks, his boss Chuck Sacks, and Kinetik for the quality work and products. 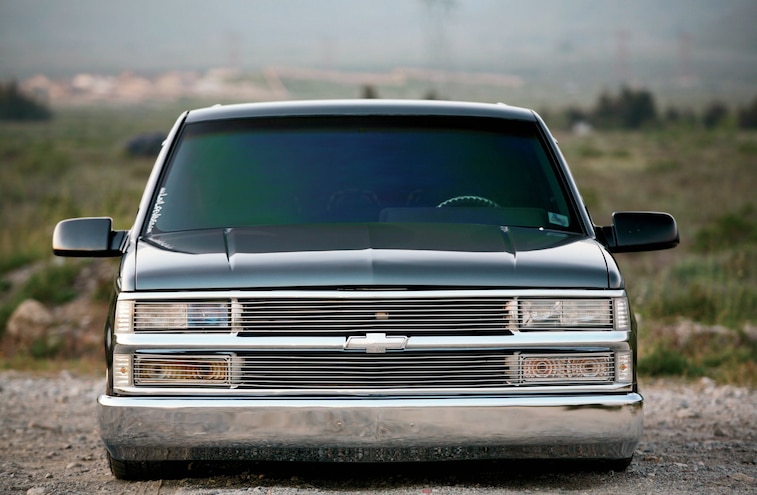